Instruments that are easy on left pinkie fingers

Ask Question
Asked 5 years, 8 months ago
Active 8 months ago
Viewed 3k times
10
votes
Locked. This question and its answers are locked because the question is off-topic but has historical significance. It is not currently accepting new answers or interactions.

I am interested in learning an instrument but have limited mobility in my left pinkie/little finger due to an old injury. What instruments are least demanding on that finger?

The obvious ones are -trumpet - no use for pinkie at all, and slide trombone - no use for fingers separately. Followed closely by xylophone/marimba/glock/vibraphone and drums.

Really? Not one mention of Django Reinhardt?
Django lost the use of his fourth and fifth fingers in a fire but that didn't stop him from ripping it up on guitar (and inventing a new genre of music in the process).

A few years ago, I sustained a minor sprain in my fretting hand which made it painful to make certain finger changes (I play bass mostly, but guitar as well). I adapted around that, and I didn't let it stop me from playing.

You can play any instrument you want to! Work around any problems or weaknesses, don't let them stop you completely. And don't let anybody tell you can't because of a disability.

The typical recorder fits the bill perfectly for you. It uses all fingers of the right hand, and the thumb and all-but-the-pinkie of the left hand.

Pretty much all percussion instruments, which includes hammer dulcimer and its ilk. I don't know whether the harp requires pinky use or not.

I suppose it'd be cheating to suggest the theremin :-) .

The didgeridoo asks very little of the pinkie finger on either hand.

The harp. It's normal to play just using the thumb and first three fingers on each hand.

Rockin Cowboy alluded to this, but I'll spell it out separately:

Singing is a skill that can be developed like playing any instrument, and it's arguably one of the cheapest and most convenient options. You almost never have to tune, polish, or repair the instrument. You don't have to carry a bulky case with you to practice.

That's not to say that you will necessarily find it easy. This article talks with Joanne Rutkowski, professor of music education. I quote,

“Everyone who can speak can learn to use a singing voice, but not everyone will have a fabulous-sounding voice. Once the vocal instrument is working, the ability to sing with good intonation is dependent on musical aptitude and musical achievement.”

You will definitely benefit from vocal training. Don't think you can skip taking lessons just because you don't need to buy an expensive instrument. https://www.vocaladvancement.com/can-anyone-learn-to-sing/

I think it's worth a try. You may not ever (or may!) become one of the greatest, but you should be able to get decent results.

As you can see by all the answers so far, you have many options. One thing that I might point out is that many of the instruments mentioned (horns, harmonica, brass) require you to blow into them. So they don't work as well if you want to use your instrument to accompany your singing.

You can learn to play guitar "left handed" which means that your right hand would be your fretting hand. Whether you use a pick or play fingerstyle, very few guitarist use the pinkie of their picking hand for playing. Learning guitar requires learning to contort your fretting hand into unnatural positions. Those positions are equally alien to either hand so it might be just as easy to learn from the beginning - to play either way. In fact many folks who are left handed will learn to play guitar right handed due to the fact that "right handed" guitars are more widely available. In your case you have a compelling reason to learn to play guitar "left handed".

Another option for a stringed instrument that will work great for accompanying a singer in many musical styles and won't require the use of your pinkie whether playing left or right handed - is a three string cigar box guitar. These guitars can be homemade or you can buy one commercially produced. Many of these actually sound amazing and you can even add electronics and play them through an amplifier. Because of the way they can be tuned, you can actually play thousands of songs with only one finger. Here is a video on YouTube that discusses a common tuning method and shows how to play with only one finger.

If you don't like the idea of a cigar box guitar, you can use the 3 string tuning concept to play a six string guitar with only three strings installed. Again depending on your tuning, you could play such a guitar with just one finger and use a barre to form entire chords. Or a finger tip covering two strings to form power chords.

Here is a picture of a professional performer named Chris Ballew (stage name Caspar Babypants) who takes all but two or three strings off all of his stringed instruments (many shown in picture) so he can play them with one or two fingers. 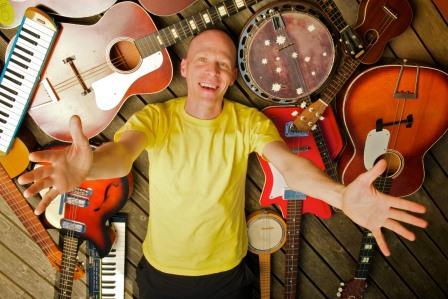 If you are not worried about singing along while playing your instrument, and you want an instrument that is easy to learn, portable and inexpensive, You might want to consider a harmonica.

If you want to try a harmonica, you can buy cheap ones for around $5.00 US. But if you are serious about trying to learn harmonica, you should get a quality instrument because it will be easier to learn to bend notes on a good quality harmonica. I like the ten hole diatonic (commonly referred to as "blues harp") harmonica which can be purchased in all 12 keys (and more).

Most professional harp players keep a set so they can play songs in more than one key. What I like about the diatonic (as opposed to the chromatic) is that the only notes available without bending are guaranteed to be in the correct key, so even if you make a mistake, it's not quite as obvious.

No matter what instrument (or instruments) you decide to learn to play, have fun!

The ukulele is great for avoiding pinkie finger use. Also melodica, accordion, banjo…

Flute makes no or very little use of the left-hand little finger.

If you play the standard Boehm system there are no keys for the LH 4th finger and even if you play one of the extended systems there are alternative fingerings. Rudall Carte and other 'simple' systems don't use that finger at all.

Also fife and tin whistle, both of those don't use that finger at all.

Not the answer you're looking for? Browse other questions tagged learning instruments physical-limitations or ask your own question.

14
Is it possible for a left hander to learn guitar right handed?

8
Why are there transposing instruments that transpose by octave?
2
What are the musical instruments that have the sounding range that has at least all notes on this range A#1-C5?
7
Which wind instruments are a problem with braces?
4
Why are there no instruments made from rocks?
4
Name for instruments that can only play one octave, vs one that can play many octaves?
7
Why are drums from high to low and other instruments from low to high?
11
What instruments can a four-year-old with left-side paralysis begin to learn/hope to ever learn?
3
Left hand injury
15
Genetic limitations to learn certain instruments
6
Are there any violin family instruments built without a left shoulder?