Is there a "standard" or "typical" drum kit layout?

I am dipping my toes in the water of getting a "real" drum kit -- by drumming standards, it's still pretty crap since it's (basically) the Alesis DM6 entry level electronic drum kit. But one thing I didn't even consider when making the leap is that I don't know where to properly place the drum heads and cymbals.

I am ashamed to admit I learned everything I know about drumming from playing Rock Band, and this includes the default layout of the drums and cymbals. I know, I know, but ... I'm trying to figure this stuff out as I go!

This is the default Rock Band kit layout, with 4 pads and 3 cymbals in a particular arrangement perhaps more determined by mass manufacturing than anything else: 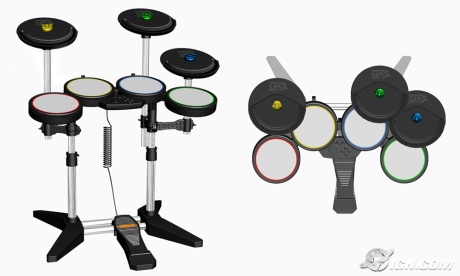 Now if we look at this picture of a real, actual drum set … 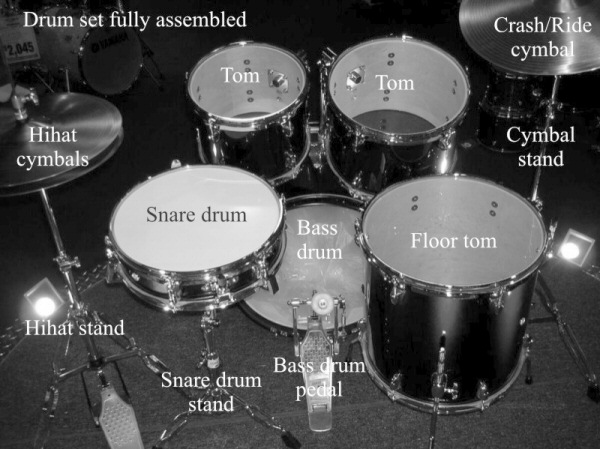 … the default Rock Band drum/cymbal layout is maybe in the ballpark. But it seems there are important differences when you have a fully positionable set of drums. Is this picture representative of a "standard" or "typical" drum kit layout? (Yes, I realize that layout is of course a personal preference at some level, and there will be variance.)

Based on what I've seen, these positionable electronic drums should not mimic the default Rock Band setup, but perhaps should be more like so? 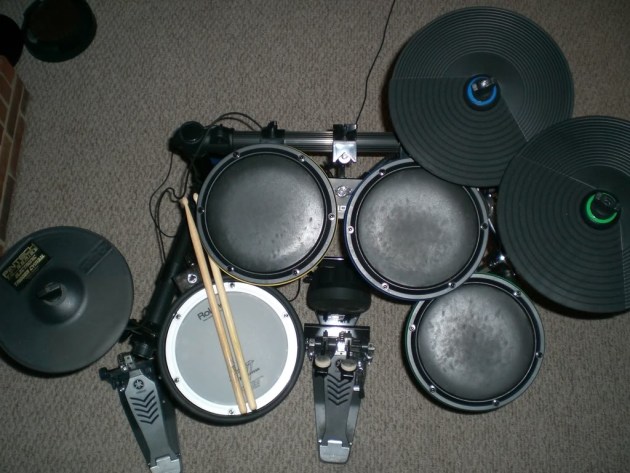 I'm not looking for a perfect layout, just seeking advice on what's typical or standard in drumming. I want to break any bad positioning habits I might have accidentally developed from learning on the original Rock Band kit as I progress to the brave new world of real-ish electronic drum kits.

Your description at the end is pretty close to the default (assuming right handed) for a rock kit, which is the most commonly used setup. There are other standard kit setups such as Jazz Kits see @Eric K's answer for a description of a Jazz kit.

So for a "standard" rock kit you'd have:

Also you'll have the middle toms and snare angled slightly towards with the cymbals at a much more aggressive angle towards you.

The positioning & height of the toms allows for good runs up and down the kit and is somewhat in line with their relative positions on a musical score - or that's how I see them when I look at a score.

This is a good visual representation of the heights & positions: 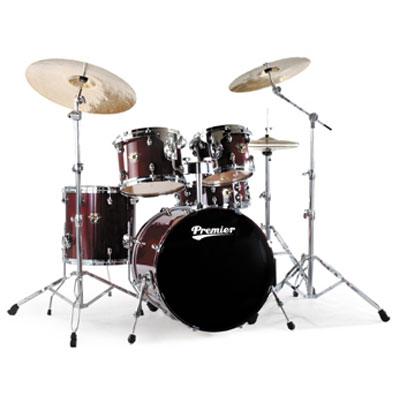 Once drummers get more experienced you'll see more crash, splash etc. cymbals of various sizes and other bits and pieces popping up on their kits but the above is the usual starting point for a rock kit.

I've played drums for 35 years so a few thoughts that may (or not!) help:

The "standard" kit setup pictured in @DEfusion's answer is optimized for a right-handed drummer playing primarily rock songs. The snare and hi-hat are the two most easily accessible pieces with the primary crash (closest to the hi-hat) also within easy reach for accents. The rest of the drums fill out from there in order of utilization.

If, however, you wanted to play something more ride-heavy (like jazz) you might prefer a slight modification to remove the middle tom and bring the ride cymbal in closer...something like this: 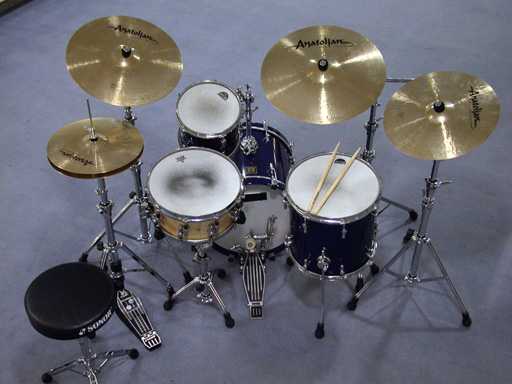 Basically, the idea is to keep the pieces of the kit that you'll strike the most within easy reach and then build the rest of the kit out from there. An efficient drumset lets the music and creativity flow freely!

Apparently, most standard drum kits have four cymbals, not three. That's something I was missing. Quoting from another site I asked this on, which has both drummers and gamers:

the kit you've linked in the top pic is what I'd consider extremely barebones. Here's what I consider a pretty basic drumkit: 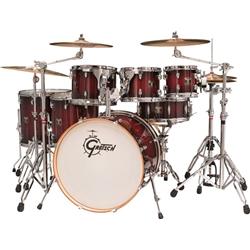 In most anything but a barebones drum kit, you're going to have four cymbals: the hi hat on the far left, the ride cymbal on the right, and two crash cymbals above, left and right. So it's completely natural to have a crash cymbal on your upper right.

A drum set with a single crash typically is either a jazz kit or a travel kit. It works for jazz because you don't do a lot of crashes and milking a smooth sizzling sound out of the hi-hat can be used for a similar effect.

In those setups the crash is between the ride and hi-hat because it allows you to use it as a transition between the two, and also because when playing faster tempo'd songs it would be very difficult to go from a right-positioned crash back to the left-positioned hi-hat. This isn't as noticable on a Rock Band kit because it's so much smaller, but a real kit might have 3 or more feet between the crash and the hi-hat - not insurmountable distance to move your arm. 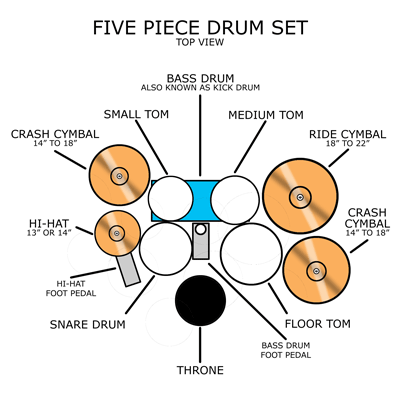 You're almost right. The typical layout is like in the last picture you posted, except for the crash. You'd typically put that on the left. On your picture, it would be above the hihat, and to the left of the tom. That's just on your picture. In reality (in 3D), it would be higher than your tom, sort of mirrored by your ride cymbal (but a little higher maybe, depending on how low you put your ride - I put mine fairly low).

This makes it easier to come back to your hihat when you hit your crash. The distance for your right hand to travel would be less.

Then, when you add more cymbals (not always that easy with digital drums), you sort of put them where you want: in the middle, to the right but higher than the ride, etc.

I have a Roland TD-9K, just like this one. My cymbals are a little lower than in the image, but that's personal preference. 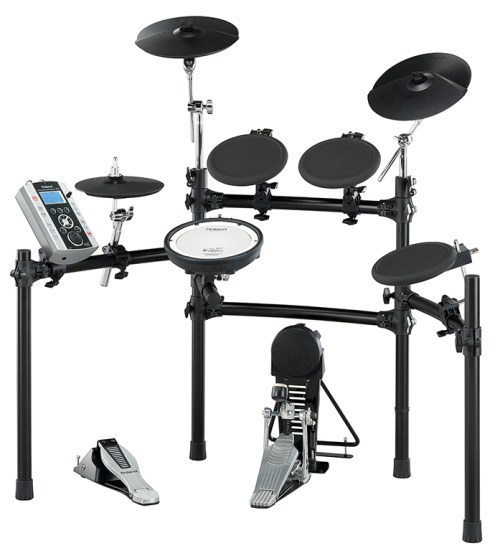 I agree the Rock Band setup is odd. The hi-hat should really be red instead of yellow. I moved the yellow cymbal (hi-hat) to the left of the red drum (snare). I play it with my hands crossed over like a real drummer would. (I have the ION drum set which allows you more flexibility). Messes with your mind a little at the beginning. Probably couldn't have learned it that way since it no longer matches the order on the TV screen, but I already have the muscle memory.

I also agree the Rock Band blue(ride) and Green(crash) cymbals are backwards. I didn't bother to switch those, but I did move the blue(ride) to the left of the toms and Green (crash) between the toms so they are at least in the normal position for cymbals. p.s. besides switching them, the crash should really be yellow. Only if they added a second crash should it be green.

Hey, if I was still in high-school maybe I would be a real drummer. But I'm 47 and love to hang with my 16yr old on Rock Band. Most teens don't even want to be with their parents....

At the end of the day it is what you're comfortable with, what you can afford, or what 'looks' good. Back in the 80's when I played with goth/punk band Legion (UK), I used to have a 10 piece, which was a standard right hand set-up 5 piece, with an additional two rack mounted small toms (left) and a raised floor tom (right) plus two timbale drums mounted above the central toms. As for my ride cymbal, always directly above my hi-hats, with crash/china placed anywhere else - well I am a leftie. I actually did use all the drums (lots and loud), yet as time went by, I have slimmed right down to a small size irregular 5 piece (with no floor toms). It is unusual, but it works for me, looks pretty cool, and fits in the boot of any car! In fact as a recent development, I have adapted to lead vocals for even less to cart around!! Cheers guys. Whatever you play 'Keep Rocking'!!

Depends entirely upon what you want to do. For the music I play (and where I'm at now as a person, as opposed to 20-30 years ago when I first started) I only use a 3 piece (bass drum, snare, floor tom with a hihat and a few cymbals) because I'm comfortable on it. On slight occasion I will use one mounted tom for some color but (blues, funk, jazzy) styles require more rhythm that color so its what I go with. Your mileage may vary but be proficient at what you do decide to go with. Nothing worse than a crappy drummer with a massive setup. Cheers!

chrischris
1
Add a comment  |
Highly active question. Earn 10 reputation (not counting the association bonus) in order to answer this question. The reputation requirement helps protect this question from spam and non-answer activity.

16
Should I retrain myself to be a right handed drummer?
19
How do you successfully share another drummer's kit at a show?
10
What characterises Irish drumming?
8
Ideal Cowbell Placement
6
Is there different bass pedal sizes?
3
Setting up an electronic drum kit; volume differences for each component
4
Is there any standard format for MIDI drum lines?
2
How to close the gap between the engineered drum sound and the live drum kit?
2
Why do snare players only have one drum?