I think I have the wrong perspective.

If you take an octave and express it in cents, you get 1200.

Even more so, if you look at the decimal ratios in this table https://en.wikipedia.org/wiki/Equal_temperament#Comparison_to_just_intonation, you will see that it takes "longer" to get to the 5th, and then from the 5th to the 8th is very "fast".

I have a feeling this has to do with the logarithmic nature of pitch, I feel like I am close to understanding why this is, but wondering if someone can help me out.

You are exactly correct that it is the logarithmic nature of pitch that causes this effect.

In cases like this, I find that a picture is helpful. Here I've labeled equally spaced octaves (1200 cents) along the x-axis (representing pitch). I've then labeled the corresponding frequencies on the y-axis as multiples of some arbitrary base frequency f. Note that each octave doubles the previous frequency, so I've drawn the exponential curve that connects them. The vertical dashed lines represent the pitch that is halfway (600 cents) in between two octaves. The horizontal dashed lines represent perfect fifths, which are 1.5 times the previous frequency. Note how these lines do not meet the curve at the same point. 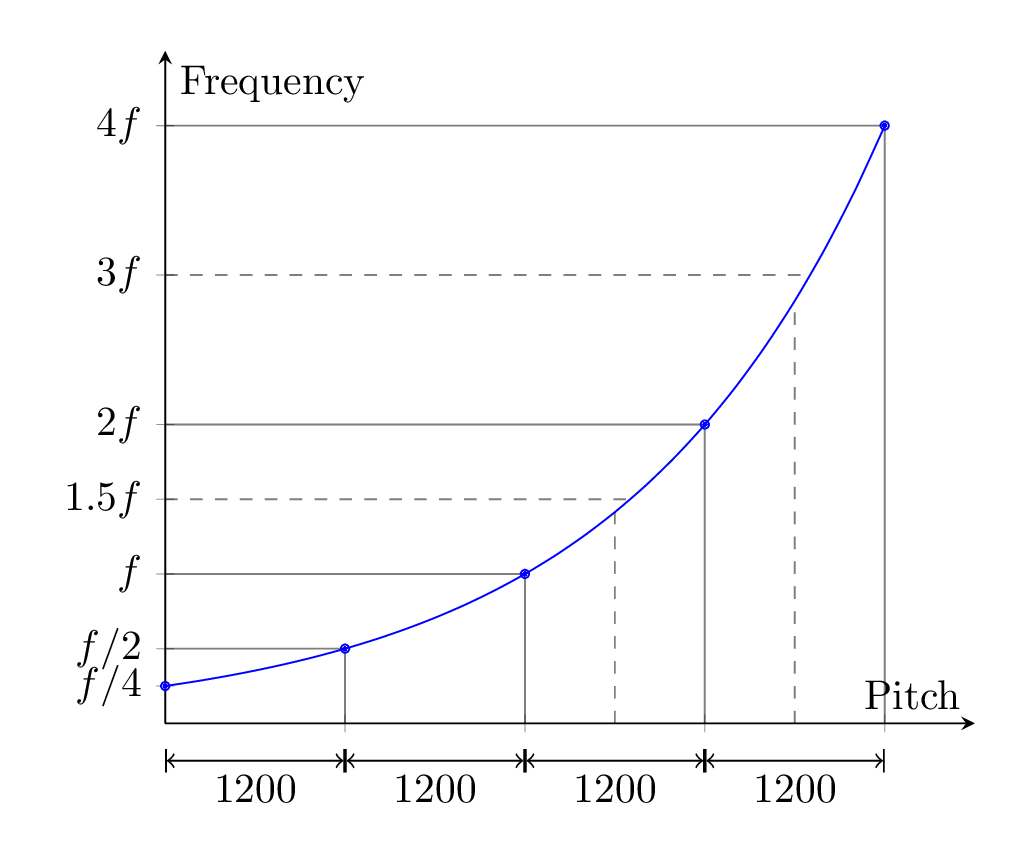 Go two octaves up, and your frequency goes from 1 to 4 times its value. But one octave up is not 2.5 times the frequency, but rather 2 times.

So if you have two notes with frequencies f1 and f2, the middle of their interval has the frequency (f1 f2)^0.5, the square root of their product.

Consequently, "half an octave up", 600 cents, corresponds to a multiplication of the frequency with the square root of 2.

That ratio applies to the frequency which is an absolute measurement, not cents which more of a relative distance measurement between notes. They are different in nature.

Just a simple example, the perfect fifth above A4 (440 Hz) is E5 (660 Hz Just intonation/ 659.26 Equal temperament). This is where it makes sense to describe the interval in a ratio. A4 itself is 7 semitones away from E5 and with each semitone being 100 cents is 700 cents. See how in one we are looking at absolute values and one we are looking at relative distances? They each have separate uses and meant for different purposes.

A perfect fifth is just that. It's a fifth from the root, but that's not exactly the halfway point. That's saved for the TRITONE, which actually sounds an odd interval to some - used to be called 'the Devil's interval'. The tritone is equidistant from the root either way, so must be halfway. You're right that the P5 is not in the middle.

700% is 7 moves from the root. The 3/2 notion is a little weird it refers to the occurrence of the 2nd overtone which is 3x the vibration of the root.. via laws of physics.. but the 1/2 step interval = 100%/root x twelfth root of 2 is a human invention.. i think, like comparing golf balls to mushrooms

Not the answer you're looking for? Browse other questions tagged theory temperament or ask your own question.

9
If equal temperament divides an octave into 12 equal parts, why are the hertz differences not the same but 12ths of two?
2
How do you flatten a pure fifth by a fraction of the syntonic comma?

28
Why does the C7 chord on guitar omit the G note (5th) in open position?
6
Why does a melodic half step resolve on the higher note?
2
In C major, if the third note is 14 cents sharp from JI, does the V/VI have a third that is 28 cents sharp?
2
Voiceleading and piano
4
Chord construction using the minor scale
2
Is there a formal term for the “WWHW” and “WHWW” ordering of intervals in a perfect 5th?
10
Why does this tonal scale from 1737 have both F and E♯?
5
Minor Key with note one half step below the Root?