Has there ever been an orchestra without a conductor?

I don't think I have ever seen an orchestra where there wasn't someone conducting.

Has there ever been such an example of an orchestra?

Edit: By conductor, I mean the guy swinging the baton: 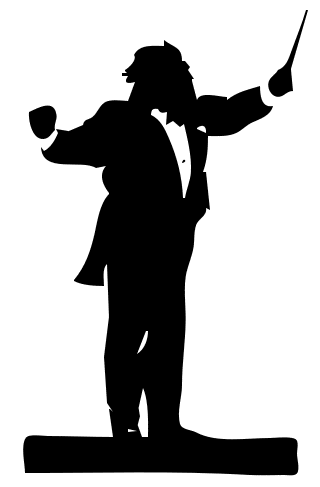 The East Coast Chamber Orchestra (ECCO) was envisioned in 2001, when a group of young string players sought to form a conductorless chamber orchestra, based upon democratic principles. The members are soloists, orchestral musicians, and chamber musicians all mainly trained at Marlboro Music School and Festival. ECCO is a string orchestra made up of 17 instrumentalists.

The Advent Chamber Orchestra started in 2003 when Roxana Pavel and Elias Goldstein worked together in chamber music ensembles. The ensemble functioned primarily as a chamber music collaborative until 2005 performed their first concert as the Advent Chamber Orchestra. The ensemble is generally led by concertmaster and music director Roxana Pavel Goldstein, but artistic decisions are achieved democratically.

A Far Cry, formed in early 2007, is a Boston based chamber orchestra made up of 18 string players. A Far Cry describes itself as self-conducted, and operates with rotating leadership and no conductor. All artistic decisions are made by vote, and the orchestra members handle all the artistic management and promotion of the ensemble. A Far Cry has close ties to the New England Conservatory (NEC) as well as the Isabella Stewart Gardner Museum, where it is ensemble-in-residence.

The orchestra Spira Mirabilis, formed in 2007, is a European classical orchestra functioning without a conductor.

The Lyra Vivace Chamber Orchestra, founded in 2010, is a musician-run collective based in Augusta, GA and the SouthEastern United States. Lyra Vivace is an ensemble of www.InPraiseofMusic.org, a resource of and for professional musicians.

Ars Nova Chamber Orchestra, formed in late 2010, is a Washington, D.C.-based chamber orchestra made up of 29 musicians. It is self-conducted, and operates with rotating leadership in all sections. Ars Nova's artistic decisions are guided by the musicians, and they all participate in marketing and administering the ensemble. The ensemble's members include D.C.-based musicians, and musicians based in other parts of the United States.

And those are just the contemporary examples.

Unfortunately neither term is strictly defined.

Orchestra may be anything from a string ensemble (starting at about 12 people), to a late-romantic crowd (easily exceeding 60 instrumentalists).

Conductor may be 1) the name for the person, swinging the baton 2) the person having the concept for interpretation and rehearsing it with the colleagues

Smaller, professional players may have no type-1 conductor, to form a coherent interpretation for lacking type-2 conductor they must be very synchronized.

As soon as soloists (as in solo concerto, or vocal soloists as in an opera) are involved, or a full orchestra is playing I don't believe in existence of an orchestra without type-1 conductor. The area the players need, the remoteness of far players, speed of sound delays, free capacity of mind to detect and correct any sort of delay wherever...

Yes it is sometimes the case with smaller baroque and ancient music type orchestras although other eras of music also had it sporadically. Often it is chamber music with only strings.

I know the Irish choir group Anuna sometimes have a small conductorless string ensemble. Something which fits it with the type of music they perform. IF the video is anything to go by it looks like the lead of the 1st violins takes on the role of conductor.

You can read more about it here.

Taking the question at its most literal: yes, there have been many conductor-less orchestras. The conductor, in the sense of the person in front of the orchestra with a skinny baton, is a relatively recent innovation.

Wikipedia offers a history of conducting, which includes this statement:

By the early 19th century (ca. 1820), it became the norm to have a dedicated conductor, who did not also play an instrument during the performance.

In the general sense, conductors of some sort go back at least to the middle ages (see Wikipedia), but the modern conception of the conductor can be traced to, roughly, 1820.

A 2018 article in the South China Morning Post also offers some brief history.

It was 1820 when the word “conductor” appeared on a concert programme for the very first time, according to the book A History of Orchestral Conducting.

Brittanica has a brief and useful history of conducting, which, among other things, contains this tidbit.

Conducting became a specialized form of musical activity only in the early 19th century. As early as the 15th century, performances by the Sistine Choir in the Vatican were kept together by slapping a roll of paper (or in other cases, a lengthy pole, or baton) to maintain an audible beat. This practice continued until it became an actual intrusion on the performance and was of necessity abandoned.

Not the answer you're looking for? Browse other questions tagged orchestra conducting or ask your own question.

65
What does a conductor actually do?
7
How does an orchestra hold groove?
0
If the conductor went missing post-rehearsal…?

0
Which set of books could I read to become an advanced conductor?
7
How to get experience as a young conductor?
59
Have orchestras included any modern instrument lately?
9
Aren't conductors like Valery Gergiev hard for orchestras to follow?
4
How long was Adrian Boult's baton? Why did he use such a long one?
10
How does one “practice conducting”?
3
What is the biggest chord ever written for orchestra?
7
Approach to teaching a conducting class virtually
0
If the conductor went missing post-rehearsal…?