Do the notes of a chord form parallel octaves, even when they are not played simultaneously?

Here is an example of what I'm trying to say

The sample below is in Bb major. 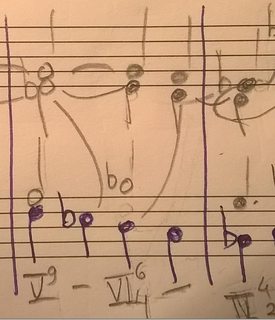 Do the notes of the bass and the alto form parallel octaves?

So, the D of the bass and the D of the alto aren't being played at the same time, but I'm not sure if I can avoid the parallel octaves like this. Is this an error or not?

I know that the C of the bass and the D of the alto are dissonant, but let's avoid that mistake for the sake of the question

There are some aspects of your example that go a little beyond the norms of 18th-century common practice such as the 9th chord and the move to a second inversion vi chord, but that's more complicated to assess than merely "mistake" or "not mistake." The passing tone in the bass at the same time as the 9–8 resolution in the alto (turning it into a highly unlikely 9–9 move) is also unusually harsh for common practice. The doubling of the chordal seventh on beat two is fairly unambiguously an error in this style.

However, ignoring those issues, using a suspension to offset what would otherwise be parallel 8ves is generally ok in the style. It's more common (and arguably more effective) to offset parallel fifths in this manner, using 6–5 resolutions, because the baldness of 9–8 resolutions doesn't mask the underlying motion as well. In this case though, the doubled chordal seventh tendency tone highlights the similarity of function, and a move like this would probably be avoided by most composers of the era.

Not parallel octaves, but just by the skin of its teeth.

The second inversion of vi isn't that at all: it's I6 under a suspended 7th and 9th, which both resolve normally, but D in the bass has already moved on to a passing note C. Nonharmonic tones coinciding with a resolution are not that uncommon, but, as has been noted, the similar motion produces parallel ninths. Parallel ninths are, as Pat Muchmore noted, unusual and a bit rough in common practice harmony. The similar motion between the outer voices here, with E♭-D in both the alto and bass, is making life very difficult for you.

So I'll read between the lines, and answer the question you are really asking: how to handle a double suspension in parallel thirds.

Chains of parallel thirds used in suspension are tricky. Normally, at least one voice needs to be in contrary motion, and you need to ensure that, when you arrive at fifths and octaves by similar motion, they are direct, rather than parallel, fifths and octaves, with preferably at least one voice in the alto or tenor (i.e., avoiding direct octaves and fifths between the outer voices). You will find that you occasionally need to use leaps in one or more of the remaining voices. For example:

There is an instance of direct octaves here, A/F going to B♭/B♭ in the tenor and bass voices in m.2, and a hidden instance of the same direct octave (A/F -> B♭/B♭) at the end of m.3 / start of m.4. There is a strongly implied chain of fifths between the alto and tenor in the first 3 measures (F/B♭ -> E♭/A -> D/G). It is, however, not the least bit dodgy because of the diminished fifth separating the two perfect fifths (and the fact that the fifths are in the alto and tenor). There is a direct fifth between alto and bass in m.3 (D/C -> C/F).

The tenor B♭ in m.1 (marked "+") is an anticipation. I could have used a passing C instead, or just held the D for a full minim, but the suggestion of the tonic major 7th in first inversion seemed tastier. I've marked out all the suspensions and resolutions using figured bass notation. The start of m.3 can be taken as a kind of gapped eleventh of C minor, but I prefer to look at it as the simultaneous application of two very common suspensions.

Note that, as I suggested above, the direct fifths and octaves all involve at least one inner voice. Note also that a) the outer voices are essentially forming a wedge, and b) the F in the bass at the start of m.2 is being treated as a chord tone (which, as the root of the chord, it is). That is where your example started to come a cropper: you were treating the root of the ninth as if it needed to resolve by step downwards. Note that, except for giving myself more room to move by dropping the bass an octave, I'm using the same suspension and voice order as you.

When you are dealing with tricky dissonance handling, simplify your voice leading to the essentials (just the suspensions with the underlying root movements), look for the spots where you will need to place the octaves and/or fifths, work out how you can get to them with contrary or direct movement, and then start elaborating the voices when you have something that makes sense.

You do not directly form chords with the voice notes, but melodies/voices that live in the "scope" of a chord. Think when you find chords for the main melody, you don't create a new chord for each changing note in the melody, but you find a chord that fits the dominant part of the melody sequence. A voice melody often starts on a note in the chord, and has a movement that leads into and resolves/lands on a note in the next chord.

This is not absolute rules, and the most important is that it sounds good. If you create something that lives on the edge or even breaks standard "rules", it can end up sounding interesting and thus you have created something unique that makes your music stand out.

This is a difficult thing to balance, because it can tip over from sounding interresting to sounding like it was a mistake.

Notes in a chord can be played in a sequence that is not simultanously, but are components in the same chord. Think of playing guitar by finger plucking where each string is plucked after the other, but all is part of the same chord.

Whether a sequence of notes are considered to be in the same chord or not, is somethimes difficult to know, but again - it is important to hear how it sounds like, and let that define the chord.

2
Voice leading rule hidden fifths/octaves
5
How to realize a figured bass
1
Do parallel octaves "count" across multiple voices?
2
Is there a rhythmic counterpart to voice leading? Is counterpoint supposed to fulfill this role?
1
Why is this jump allowed in four-division time strict part-writing?
2
Four part writing: Does quality and amount of dissonances affect use of non harmony notes?
2
Is there a mistake in this four-part composition
4
Do metrically weak chordal skips cause parallel 5ths and octaves?
3
How to part write I6 to IV with parallel 10ths in the outer voices
0
Why do tonal composers prepare dissonances when the dissonant chord is inverted?