How to read piano key signatures

I just started playing piano, but Im confused about reading key signatures. For example take a look at the first measure of this song: http://www.musicnotes.com/sheetmusic/mtd.asp?ppn=MN0130187, does this measure indicate to just play c over and over again. I know this song uses minor and major keys, but how would you know when to play them by looking at sheet music

It is difficult to tell from the key signature alone if a song is in a major or minor key because the key signature is the same for a major key and the corresponding "relative minor". The difference is which note forms the tonal center - which is the root note. A major key and the relative minor key will have the exact same notes, but the intervals from the root note will vary depending on if it's major or minor.

For more information on how to determine if a song is in a major or minor key see this: Major or Minor Key?

In the sheet music you linked the first several measures only have notes on the bass staff (with bass clef) and the note is not a C but an E flat (because of the E flat in the key signature). The first notes played on the treble staff (right hand) are a D (all D notes in the first measure with notes on the treble clef).

There are many charts available on line which will tell you what the key signatures mean. The chart pictured below was found here: Piano-Keyboard-Guide.com 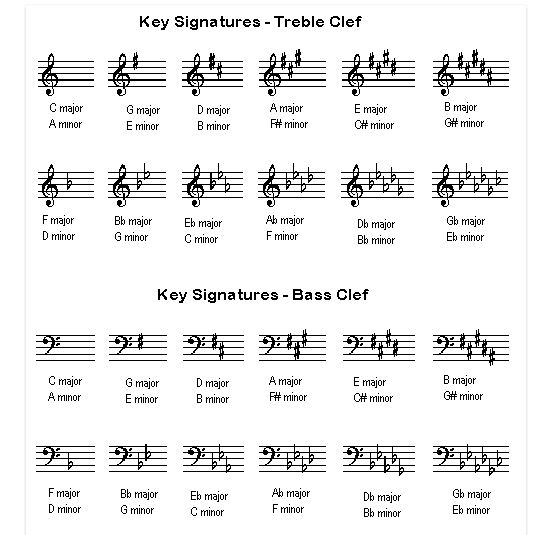 A bit of a red herring! The 'N.C.' at the start means 'no chord'!! Then the rest of the sheet music tells which chords to play, just as most sheet music like this does. The majors and minor chords are apparent in the boxes over the stave. I wonder whether you mean major and minor chords rather than keys. As Rockin' states, the key sig. gives a clue as to either one major or one minor (its relative) key. However, the notes used are virtually all the same, as denoted by the key sig.

The easiest way to discern the tonality of the piece would be to look at the note that is the leading tone of the relative minor and see if it is raised or not.

So for instance if the key signature tells you G major look at the D's in the passage and see if it is raised. If you see a D# then it clearly indicates e minor.

Also you should be doing aural training. This will help you to hear pieces in both the Major and minor tonalities so you can hear the difference between the two.

Not the answer you're looking for? Browse other questions tagged piano sheet-music key-signatures or ask your own question.

7
Hard to tell major from minor