Why is the "longest note value still in common use" called a "breve", when breve means "short"?

This Wikipedia page says that the double whole note, or breve, is the "longest note value still in common use".

However, breve in Italian means 'short'.

How did the longest commonly-used note value come to be called 'short'?

It does mean 'short'. In medieval mensural notation, it was a short note, either one third or half as long as a LONGA. It appears there were only two note lengths, breve and longa from 13th up to the 17th Century, reflecting the syllable sung. The longa is obviously a longer note length... Music may have been much slower then!

Our musical notation evolved over a very long time, during which it became increasingly detailed. This meant that innovation tended to happen at the short end of the time-scale, which probably explains the "inflation" which occurred during the middle ages and early renaissance.

I'm not sure there was ever a time when there were just two values. The story starts with "neumes", which represent whole groups of notes - to the extent that these neumes can be decomposed into individual notes there are many more than two note-shapes, and this visual variety was probably intended to suggest something about the articulation of the notes. In some of the early writings about rhythm the authors can only say that certain notes are "long" and others "short", but this surely reflects the lack of a conceptual framework within which they could speak more precisely rather than implying that only two durations existed.

The idea that a particular note-form (glyph) would exactly correspond to a particular duration (relative to the basic pulse) comes rather late in musical history, and probably only made sense once our ways of measuring and perceiving time had evolved into something close to what we have now. In the 12th century there was no mechanical timepiece which went tick-tock, no unified theory of time which linked musical durations with the hours of the day in one continuum ... there was time, there was music, but there was no 4' 33".

Our modern notation of music evolved from the so-called mensural notation, used up to about 1600. This system had a complicated ligature system (unlike our pretty straightforward note stems today) and a system to break up note values into two or three parts, unlike our system today where the next smallest note types are always half the length of the previous (whole note, half note, quarter note, etc. in American parlance).

The Wikipedia page has a fascinating table showing how note values used from the 13th to 17th centuries has gradually gotten shorter: 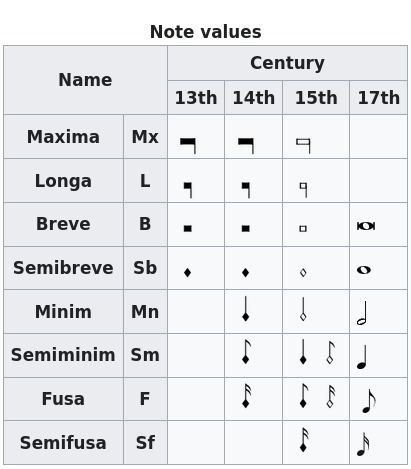 Here is the quote from the Wikipedia page, which cites Apel, The Notation of Polyphonic Music, 900–1600:

The system of note types used in mensural notation closely corresponds to the modern system. The mensural brevis is nominally the ancestor of the modern double whole note (breve); likewise, the semibrevis corresponds to the whole note (semibreve), the minima to the half note (minim), the semiminima to the quarter note (crotchet), and the fusa to the eighth note (quaver). Very rarely, mensural notation also used yet smaller subdivisions, such as the semifusa (corresponding to the sixteenth note or semiquaver). On the other hand, there were also two larger values, the longa (quadruple whole note or long) and the maxima (or duplex longa, called a large in Britain), which are no longer in regular use today.

Despite these nominal equivalences, each note had a much shorter temporal value than its modern counterpart. Between the 14th and 16th centuries, composers repeatedly introduced new note shapes for ever smaller temporal divisions of rhythm, and the older, longer notes were slowed down in proportion. The basic metrical relationship of a long to a short beat shifted from longa–breve in the 13th century, to breve–semibreve in the 14th, to semibreve–minim by the end of the 15th, and finally to minim–semiminim (i.e., half and quarter notes, or minim and crotchet) in modern notation. Thus, what was originally the shortest of all note values used, the semibreve, has become the longest note used routinely today, the whole note.

Originally, all notes were written in solid, filled-in form ("black notation"). In the mid-15th century, scribes began to use hollow note shapes ("white notation"), reserving black shapes only for the smallest note values. This change was probably motivated by the change from parchment to paper for the most common writing material, as paper was less suited to holding large dots of ink.

Also on page 96 starts a discussion on corresponding modern note values, where over time the "absolute value" of a note value grew from short to long.

Early Music Sources has an entertaining and very informative video on the topic of mensural notation that I highly recommend.

Not the answer you're looking for? Browse other questions tagged sheet-music history or ask your own question.

13
What is this type of notehead called?
4
How are note durations named in the British system?

7
Physiological basis for note durations?
7
Intended tempo of exercises in Fux's Gradus ad Parnassum
10
Who invented rhythmic value names based on fractions of a measure of 4/4 music?
8
Is this entire movement by Bach really only a single measure with just two chords?
8
To Slash or not to Slash?
3
Are there historical references that show that "diatonic" is a version of 'di-tonic' meaning 'two tonics'?
3
why is the most common note length in music the quarter note?