What is an A minor Chord played at 3rd fret?

I am playing an Am shaped chord on guitar at 3rd fret but I dont know what this chord is called.

Does anyone know the name?

I assume you are starting with this, very common, A Minor chord shape: 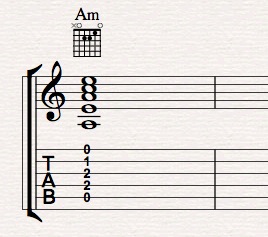 If so, moving the fretted notes up two frets, so that your first finger is now on fret 3, rather than fret 1, gives the following chord, with the two open strings remaining unchanged: 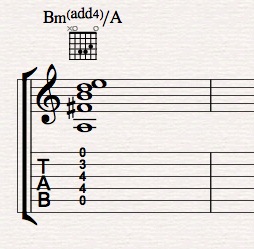 It should be noted that, as with many chords, this chord could be described, and so named, in a number of ways. It's usually best to name a chord in the simplest way possible. This may not always have the root as the bass note. Instead the simplest description of a chord may have a different note to the root named as the bass note, as is the case here, where B is the root (of the minor triad), but the bass note is written as A, using slash chord notation.

If you did want the note A to be the root of this chord, you would end up with a name like A6add9sus4 (which is, in fact, the name my notation software, Sibelius, suggested for this chord).

Sometimes the best name for a chord may be suggested by context. If, for instance, this chord were preceded by a B Minor chord in a progression, you would again definitely be thinking of this chord as Bm with a different bass note. (In other words, the chord and its name remain the same, but the bass note changes, requiring slash notation.)

The kind of chord does not change with the fret, so it's still a minor chord. It's three semitones up from A (which it would be at fret 0 because of its A shape), so it's Cm.

this is also a D6 chord so depending on the chords before an after it might be that. In the case of summertime the top two notes fretted are a part of the E7 chord so if played with the open top E string it replaces the E7 usually called for in that song. the fretted D string is an Fsharp which is not part of the E7 so don't know how that is ok.

Looking at the notation Bob Bradley's answer if you omit the high E string it could also very easily be a B minor chord with its seventh added in last inversion ie B-D-F#-A with a A in the bass. (The 4/2 notation)

13
Guitar scales further up the fret board
12
Is there a name for a chord which combines the major and minor thirds of the root?
2
How does Guitar Pro work out fret numbers/strings?
2
How would you calculate the name of this C/A# 7th chord?
2
Guitar same fret different string
5
what kind of chord progession is this?
10
Why do diminished chords have 3rd minor?
0
How to create bass tabs based of guitar tabs
1
What is the equivalent of F no capo with 3rd fret capo
0
What is the name of a minor chord with a minor 9th?