How to play the sustain pedal and rests (piano)

I have few questions in regards to playing the sustain pedal.

There is two things that I am wondering:

To give an example and some context, I will be using excerpts from a piece from the movie Tangled, "I See the Light" by Alan Menken. 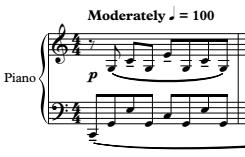 For the image above: 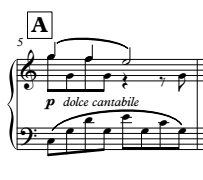 For the image above:

Sorry I hope I made my question clear enough.

There's no general rule. Use it to sustain whatever the music needs to be sustained.

In the first example you showed us, the pedal could "catch" the low C and sustain it throughout the bar. The same harmony persists - it's a C major chord all the way - so there's no chance of an ugly smear. So I'd press it with the first LH note and keep it down for the whole bar.

In the second example, it's not so easy. The chord changes on beat 2. The composer has specifically notated a sustained melody in the RH. He could have done something similar in the LH, but chose not to. And, as you have noticed, there are rests. I would be inclined not to use the sustain pedal at all. I would also suggest that the second example isn't a particularly well thought-out bit of piano writing.

Not the answer you're looking for? Browse other questions tagged piano sustain or ask your own question.

23
With regards to piano sheet music, when are you supposed to press the pedal(s)?
10
In piano music notation how are notes distributed between the staves?
16
How to play same note legato?
12
Is there piano notation for finger sustained notes (as opposed to pedal sustain)?
12
How to play these overly extended intervals on piano?
0
Does it matter where you put the tempo marking (piano)?
1
Piano sustain pedal
3
How to play this rhythm?
7
Piano: hold note but also free up hand to play other notes
27
What modern innovations have been/are being made for the piano?