I was getting no sound out of my guitar (an esp ec-401vf with active EMG 81/85 pickups). Amp is tested with another guitar and is working, but I noticed one of the wires in the output jack was frayed so I re-soldered it to the post and, in fact, I went ahead and resoldered all three including the ground wire. I am still getting no sound output when the instrument cable is plugged in but the strange thing is, if I pull the cable out slightly, then I get sound output. What would cause this? I am looking at the two connection points and they are snug against the cable as well so I am stumped. Any advice would be extremely helpful. Thank you very much.

As Carl commented, if it works with another guitar using the same cable etc., and you get sound when you pull the plug slightly, then one of the contacts is not sitting tight against the plug. 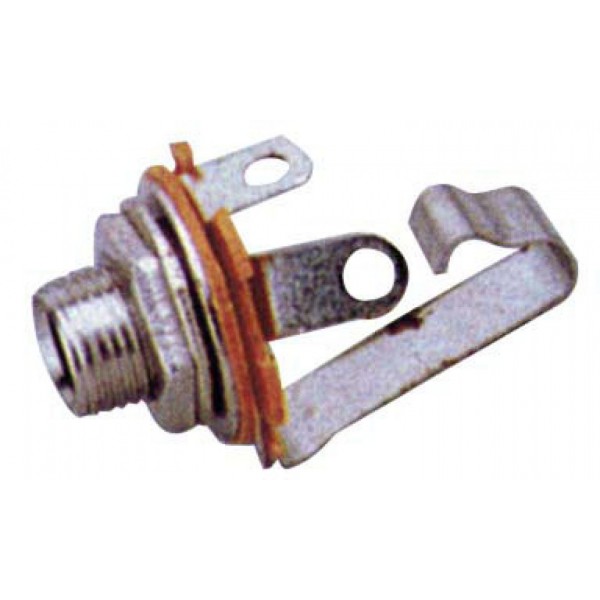 Very simple fix - with the jack plug out of the socket, bend that Spring further towards where the plug will be (don't be gentle with it...a good bend will help) and this will force the plug against the contacts.

First, since this is an active instrument, make sure it's powered. Active guitars and basses (as well as floor effect pedals) typically use a somewhat hackish on/off switch mechanism, namely they connect only the ⊕ pole of the battery to the circuit. The ⊖ pole is connected to the ring-contact of the output jack instead. Now, such guitars are supposed to be used with mono cables, i.e. ring and shaft are actually the same thing: if you plug in a mono cable, it will bridge the battery ⊖ pole to ground, which is also used by the circuitry as its ⊖ pole, so by plugging in a cable you switch the guitar on. You can check that this works by putting a multimeter in current mode in series with the battery: when no cable is plugged in, it should read zero, but with a guitar cable plugged in (and not connected to anything else) you should get something between 0.1 mA and 50 mA of current. The EMG pickups are pretty abstemious; if there's nothing else active in the guitar then the current should be about 0.2 mA, but that much it must be. Alternative test: if you plug in a stereo cable and measure on the other end the voltage (not current!) between shaft and ring, it should read 9V.

If this works, the other important thing is that the signal gets to the tip of the cable. To check this:

Check all of this out, and resolder/rewire as necessary. As Carl Witthoft said, it's possible that the jack socket simply has bad contacts. In that case it's indeed best to replace the socket. They're really cheap (though the narrow-casing stereo variety, which you likely need, can be hard to find).

Is there any chance that there is a 3-pole 1/4" jack socket in the guitar? The 3-pole contacts are named tip - ring - sleeve so for mono / guitar we would use the tip and sleeve.

There is a very slim chance that your guitar has been wired ring and sleeve. Pulling the plug out a little so that lead tip contacts socket ring would restore the output.

The fix, in this case, would be to rewire the audio 'hot' wire to the tip contact.