Why D sharp not E flat in Turkish March

As I see in measure 18 the harmony is F7 (fourth) with minor seven.

Assuming it is a minor seven because the harmony is F7 why they thought about the seventh as D sharp but not E flat ?

See the picture (the measure in the middle) 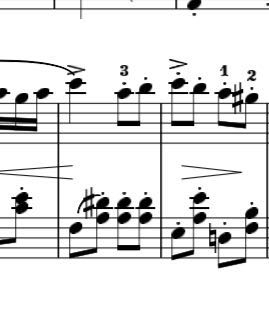 It's a D# because it's functioning as a D#. In the three measures you can see the line goes E -> D# -> E. It's acting much more leading tone like than 7th like as if it were truly an F7 the next note would either be the same or resolve down.

The fact the harmony could be interpreted as an F7 is kind of a moot point as the next measure lands squarely on Am which harmonically doesn't make the most sense and could be a more chromatic harmony or exotic in nature which in that case a lot more needs to be looked into in this analysis.

To amplify Dom's reply, it is indeed a D♯. What is going on here is that Mozart is using an augmented sixth chord (specifically the French sixth) that is being used as dominant preparation. Normally how a French sixth works is that the upper notes form V7 of V (with a missing fifth), while the bass falls a half step from ♭6 to 5. It is a variant of the Phrygian cadence (iv6 - V).

Thus the progression would normally be F6 - V - i, but Mozart is being cute here: instead of holding the high B and heading directly to V, he is taking the chord through the tonic second inversion (which is normally treated as a suspension or appoggiatura leading to V, and is thus also dominant preparation) to the second inversion diminished seventh on G♯, which stands in for V.

Sure enough, in the following bar he ends up on i6 (A minor). The B and A in the descant of the 2nd bar of your example are passing notes, the A being an accented one.

Not the answer you're looking for? Browse other questions tagged theory piano harmony analysis or ask your own question.

1
Rondo alla turca - bar 55
12
History of "jazz minor/melodic minor" harmony
2
Sight reading piano pieces with sharp or flat key signatures using intervals
10
What makes a Turkish March a Turkish March?
3
How is this chord from Liebestraum No. 3 analyzed?
5
How should I analyze this passage? As vii°7, V7, or both?
1
Is it possible to stick too closely to Mozart in an arrangement?
3
Why the flat roman numerals in minor when they aren't needed?
3
Why is there no fourth minor scale with a natural 6 and a flat 7?
13
Is this chord from Bach's C major Prelude G+ or Cm?