A weird form of Anacrusis

I saw this in a piece the other day and was wondering if there is a term for it. The piece begins on a trill that ends on the first beat of a a measure. The rhytm then mimics a upbeat yet there is actually none.

I'm wondering if this is a typical Spanish rhythms or something common to the Romantic era.

For reference here is the sheets. 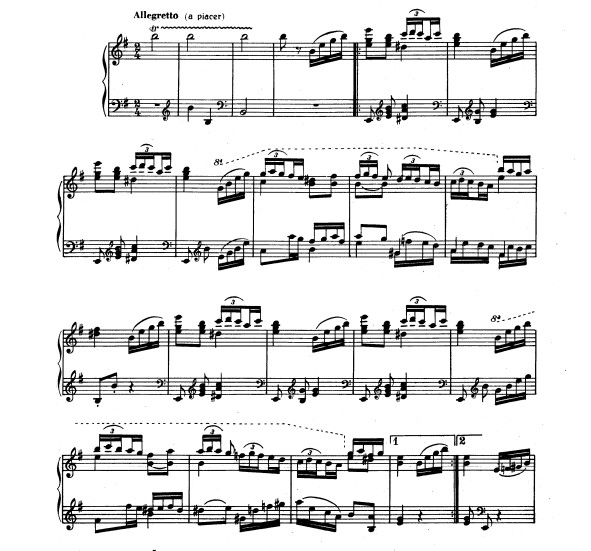 You are apparently confusing the notational peculiarity of an anacrusis right at the beginning of a piece (which is notated using a partial bar, usually without a bar number of its own) with the musical function of the anacrusis, a short leading phrase before its principal reference point, usually the beginning of a bar.

By far most anacruses don't interrupt an ongoing rhythm, the only slight exception being if they immediately follow a fermata. Even then it is unusual to not make the bar have its nominal length. Where that would not leave any room for the anacrusis, it's more common to add a full additional bar (starting with rests) rather than put down a double thin bar after the fermata and let the anacrusis start in a shortened bar right behind that.

Not the answer you're looking for? Browse other questions tagged rhythm anacrusis or ask your own question.

16
Why must the final bar complete the anacrusis?
30
How can a non-musician recognize anacrusis?
5
Is it necessary to include the anacrusis?
1
How should I play/phrase an anacrusis (aka pickup)?
2
What semantic notions underlie the Ancient Greek 'Anacrusis' and its meaning as 'pickup note'?
7
What is the rhythm of this Herbie Hancock song, and why is it so weird?
9
Rests in pickup measure (anacrusis)
4
Anacrusis in Bach BWV 816 (French suite no. 5 in Gmaj) Gavotte
11
Is there a name for the incomplete measure completing the anacrusis?
2
Recognise anacrusis in MuseScore, from Lilypond's midi files