Which instrument can a person play with 2 malformed fingers on each hand?

Due to a birth defect, I have 2 malformed fingers on both hands (fingers 1,2). 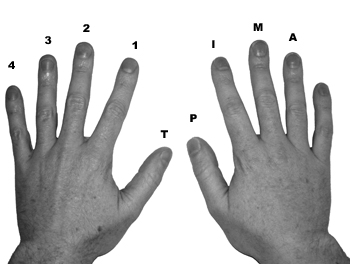 (The picture is from the web just to illustrate the fingers i'm talking about.)

I've seen GuiGui Zheng videos, it is sweet, but I doubt if she can play more complex pieces that require both hands (for example).

And to my specific case, is there any chance of playing a Piano / Guitar professionally, with only 3 fingers on each hand (fingers T,3,4)?

Or my last chance in music is using digital software?

Thanks for all the great answers! You have brought up some excellent and interesting instruments. The next step is to see which instrument I enjoy the most, and just dive in to it!

I don't know what type of music you're considering playing, but consider stepping outside of the piano/guitar realm. Trombone would be perhaps your best choice. A very difficult instrument to learn and master, but it requires only enough fingers to grip the instrument securely. (You could probably get away with a thumb and finger on each hand). The trombone can be used in any type of music; there are great trombonists that specialize in rock music, for example. Classical, jazz, new-age… the possibilities are endless.

Alternatively, if you are dedicated, consider specializing: if you learn to play pedal steel guitar (fewer finger requirements) and perhaps something like accordion, harmonica, etc., you could join a rock band with that skill-set fairly easily. Learn to sing, at least for backups, and you make yourself even more promising. (Again, I don't know what type of music you're looking at).

HOWEVER: Don't sell yourself short with only three fingers! Guitar would be tough, since the thumb can't do a whole lot, but with alternative tunings and a lot of practice, you can accomplish a lot. My father lost use of three of his fingers in a table-saw accident. He eventually regained full use of one of them, but had his middle finger amputated, and has no ability to bend his forefinger. (This is all on his left, fretting hand). He primarily plays bass in his bands now, as it's less frustrating for him, but hearing him on guitar, with the help of alternative tunings, it's difficult to tell he's doing it with fewer fingers.

As for piano, classical piano is out, I'm afraid. Some people may question that answer, but there are just too many incredible players out there, and the classical world is hesitant to accept anything but perfection (or close to it). However, piano in other styles is an option. Anything that doesn't have specific note requirements would be possible, in my opinion. So, jazz, rock… anything with chord symbols. It would be easier to do than guitar since the thumb is a fully used digit on both hands for the piano. I imagine you could do well if you were dedicated. The biggest thing is to learn (mentally) different styles and theory, etc., to compensate for any impossibilities on the instrument itself. Jazz/rock organ would be a good option; because too many notes muddies the sound, many players play simpler chords with embellishments that would be easier to accomplish and sound really good than with a piano where the sounds are easily distinguished.

My best advice is experiment a little bit, and then pick something and throw yourself into it. You can do things you set your mind to, it just might take extra time, effort, or modifications.

I will only add Django Reinhardt as an example of guitarist with crippled fingers. He has only fingers 1 and 2 in his fretting hand intact. In his right hand, he used plectrum.

His playing is anything but limited. He has developed a distinctive, yet beautiful and technically demanding style - which is copied by numerous jazz guitarists to this days.

So I think with enough dedication on this hard task, guitar could be your instrument, up to the master level ( =Django level :)

Also, you have the option of alternate tuning and slide techniques, as others mentioned.

Good luck in your musical journey.

I'm surprised no one has said "Theremin". You don't even touch the instrument. Although, it is a bit unconventional.

If you're not sure what I'm talking about: http://en.wikipedia.org/wiki/Theremin

My wife was born with no thumb on her right hand. She successfully played French horn in high school, although she decided not to continue to be a musician after that time. Many of the brass instruments would be suitable.

Playing a violin-family instrument or erhu would depend on whether or not you could properly grip and manipulate the bow. If you can find a sympathetic teacher, they might evaluate your abilities in that area.

If you want to play guitar, use an electric guitar, because the neck is smaller and the strings are lighter in gauge and require less force to manipulate. Take an example from Django Rinehardt, Tony Iommi and Phil Keaggy, all of whom had lost parts of fingers to injuries. And look at the later music of Les Paul when he became severely arthritic.

You can also play lap steel, pedal steel, and dobro-style guitars. Pedal steel, while an expensive and esoteric instrument, would be quite useful because you can use your feet in conjunction with your hands to form many chords that you could never play on a lap steel or dobro.

Study songwriting and singing! You can compose music and convince other musicians to play your compositions.

Furthermore, you are fortunate to live in a time when you can do so much with recording and editing music affordably on computers. You can build up music one track at a time playing only a few notes at a time, through programming. You have "accommodations" for you disability that were not available to musicians in previous generations.

Just tried it out on my guitar and I can grip a plectrum, strum and finger pick using those two fingers on my right hand. Finger picking feels a little weird but it is achievable and is probably cos I'm not used to it.

The fret board is where the problems lie.

I can fret a power chord, its not comfortable at the moment but practice should improve the dexterity on that. Making that opens up the rhythm lines of a lot of punk, rock and metal songs. Unfortunately a lot of bar chords are probably out as are some others dependant on the numbers of fingers you require (if you've got the dexterity and size of hand for it you can bring the thumb round to fret the low E string).

Some riffs I can play some I cant, as above this is dependant on the finger positioning it requires of you.

I don't have a slide to hand but I cant imagine there being any problem using one.

Its certainly possible to play guitar, in the few minutes I've been trying for I've got Nirvana's Come as you are and RATM's Bombtrack most of the way there and a few more challenging riffs from other songs working. My little finger is rarely used so there's not a lot of strength and dexterity in it, with time spent practising and exercising it this should improve.

I think you could develop your own style from what's available to you on guitar, with alternate tunings, capo's and slides you've certainly got a lot of scope to play with.

If you're interested in guitar, try playing the guitar with a slide. You only need one finger for the slide. Try to have an alternative tunning for the guitar so you can have a chord played with the slide that consits all on one fret. Toni Iommi had his fingers severed and was still able to play the guitar with tips made for his fingers.

I don't think your disability can prevent you for learning to play any instrument you desire. Maybe some will be harder to pick up, but it shouldn't stop you.

I have malformed fingers, and I consider myself a fairly advanced guitarist. I have malformation in my 1, 3, and 4 fingers and my 4 is missing a bone. My recommendation is that if you really want to do something, you find a way to do it. It may not be the same way as others, but thats okay. Make your own "technique". My sister has a similar malformation and this was the advice I gave her when she was training to be a hair stylist and was having difficulty with mastering the scissor techniques they were trying to teach her. She is now considered a top-end hair stylist for rich folks.

Here is a link to a picture of my left (fretting) hand.

Here is a link to me playing guitar (this was about 6 years ago):

Some alternative instruments come to mind, such as the (Appalachian) dulcimer or the autoharp.

You can play the piano and guitar with some limitations, and brass instruments with no limitations.

If you want something cutting-edge, some serious musicians are using devices such as iPads and iPods for both studio recordings and live performances. Have a look at MorphWiz, for example, developed and used by Juilliard-trained pianist Jordan Rudess.

An alternate solution for playing the guitar:

Play left-handed, where you fret with your right hand and strum with your left.

If you are unable to hold the pick, there are special picks you can get such as the Zero Gravity Orbit Guitar Pick, which wraps around your thumb and might make it easier to hold with your T and 3 fingers.

Bill Clements is a one handed-bass player

Granted his left hand is normal, but he has developed some unique styles due to his missing right hand and his prosthesis. Francis Rocco Prestia only frets with one or two fingers (most of the time).

You probably have higher than average dexterity in your other fingers so it may be possible to develop your own style on a specific instrument. For example you could "Rocco" style with the left hand and "Ben Clements" style with the right hand.

Bass maybe a good choice. I've played outside gigs wearing mittens (because it was way too cold) and still was able to get most of the songs done just fine.

You'll be handicapped when playing polyphonic stuff with the right hand, but less so than on a piano keyboard.

I am surprised nobody has suggested touch-style guitar for this person. The Chapman Stick, the Warr Guitar and others are played in a totally different way and yet produce electric-guitar-like sounds.

There are also a wide array of non-traditional controllers for electronic instruments like touchpads and joysticks and contact pads and touchscreens.

Not the answer you're looking for? Browse other questions tagged guitar piano learning or ask your own question.

4
How to layout left hand fingers correctly?
26
When practicing on my instrument - which is more important - quantity or quality?
0
How to know which fingers to use to play songs?
16
Is it possible that some people can play one instrument but not another?
2
Is it right to play a triad left hand chord with fingers 4-2-1 on a piano?
2
Strumming with fingers
3
Can most pianists play E–F# ninth by left hand?
2
How do I know what each hand should play when I only have chord names
0
Which fingers to use for which notes
5
Is the myth that if you can play one instrument, you can learn another instrument with ease true?