Is this a tie or a slur or something else?

The top right bar has 3 slurs/ties but they are not connected to anything. How is this interpreted? 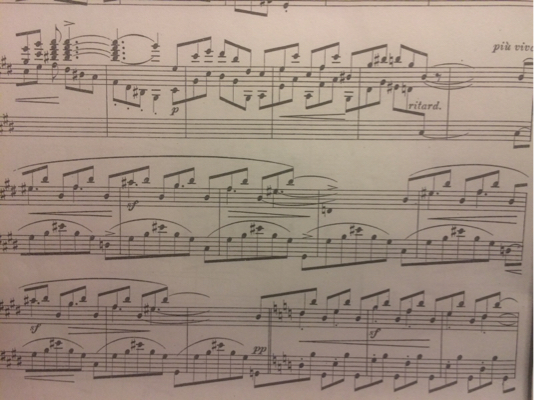 Ordinarily, I'd say this is simply a "laissez vibrer" instruction (playing a chord, releasing your fingers but sustaining it with the pedal).

But the unconnected quaver head in the 10th bar is definitely a misprint, so that lowers my confidence in the entire score - the slurs might also be misprints (maybe an entire chord is missing?).

Those are "laissez-vibrer" ties: you just let the notes ring on. Comparing the top occurence of this construct with the following one makes it likely that the excess ties without proper reference may be a printing error and should instead be attached to the last three notes of the top voice.

The next occurences show a second voice with explicitly prolonged on-beat notes which the top system does not exhibit, but it would appear like the ties all belong to the first voice.

Of course, the execution of this second voice will not differ in the last, laissez-vibrer notes of the phrases. You've tagged this "piano", so as opposed to a cembalo, organ or free bass accordion, there is no other key to bring this across, so you have to rely on phrasing and the listeners' imagination.

At any rate, you were asking about the first line: here I consider the most likely interpretation a printing error with the intent of letting all three top voice notes ring into the next measure.

I'd interpret it as a printing error!. Five (poss.) bars later, there's a note head with no tail. Also it looks like it's in 6/8, but with unusual joining of the 'triplets'. The three 'slurs' are actually referring to only one note there, whereas bar 9 at least has 3 'slurs' for 3 notes. Who's it by and what is it?

EDIT : the quaver rest doesn't help much, either. Which line is it supposed to belong to? If it's there, it would effectively cancel 'laissez vibrer', as once the note/s been cut off to play a rest, it cannot be left to ring. AND - in the bass clef, it looks like 5/8!

This looks to me like the score was rendered in some piece of software that, due to some layout conflict, has failed to render some of the notes of the piece at all.

It also looks like the score is off by an eighth note from proper alignment...this happens sometimes when writing a score in music layout software that treats music as a list of notes.

It's something that often occurs when I'm writing a score in the program I use, as it's easy to get a dotted rhythm wrong, accidentally leave out a note, or incorrectly fill the remaining time in a measure with rests when typing up a score, and it causes numerous layout issues...so I'm not shocked that there are missing stems and noteheads, given that the start of each measure is off by an eighth note. It doesn't quite look like the usual errors I see in the software I use, but I'm not surprised that other programs have similar issues.

I'd contact whoever provided this piece and notify them of the issue ASAP; if it is this sort of off-by-one error that has caused the piece to render incorrectly, whoever did the layout for the piece may be able to correct the incorrect rhythm or add the missing note, and render a corrected version of the music.

I'm quite certain it's a type of laissez vibrer. I would interpret it to mean that I should leave the whole current chord in the pedal. The placement of the ties is a little odd but comparing to the following lines you see that the same idea repeats. It also explains the missing rests: there should be no silence. The first rest is probably there to make it clear that the measure is 6/8.

As for the other suggested misprints, I don't think they are such. The note with a missing tail is something I haven't seen often but I would just play it as some kind of bell; the exact length of the note is unimportant and writing it this way makes it look like it should be in another layer of sound (i.e. not accompaniment nor melody nor bass).

The displacement of the 8th notes is also probably intentional: the accompaniment is just one 8th note ahead of melody (note that the melody notes actually fall on the strong beats). For example Scriabin uses this kind of writing a lot.

All in all, I would say this is actually good piano writing. The score contains enough information about what the piece should sound like while still being easy to read.

4
Is a tie needed into a second-time bar?
9
Are there any situations when one needs to make a distinction between slurs and ties?
6
Beginning of Chopin nocturne no.20: slur and tie confusion
8
Beethoven's Tempest sonata: tie or slur?
3
When to use tied notes vs. an unconnected “laissez vibrer” (l.v.) tie?
10
What does a line through a tie indicate?
3
Liebesleid (Love's Sorrow) - Kreisler (arr. Rachmaninoff), tie or slur?
10
How to configure slur with tie when writing choral music?
12
Can you not Slur notes of the same pitch?