I'd like to ask a question on how Gregorian modes were transformed during Renaissance using a piece of Antonio de Cabezón as an example. His 'Tiento del Cuarto Tono' is written in mode 4, which is, as far as I can tell, the "Hypophrygian" one (https://en.wikipedia.org/wiki/Gregorian_mode). It does not seem that this mode assumed the use of any accidentals. However, Cabezón used a lot of them: 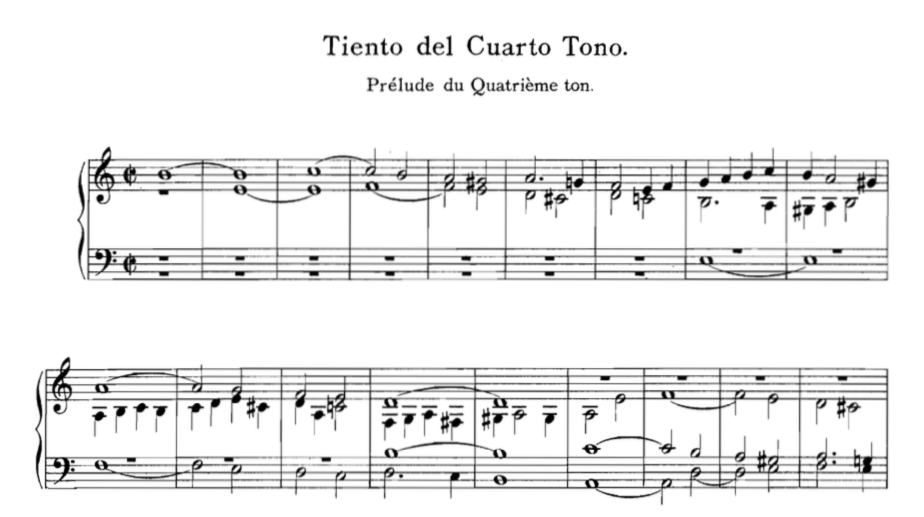 In this fragment one could even use a 'key signature' of C# and G#. Why is this so? Is it really a piece in the Hypophrygian mode?

My guess is that in Renaissance music there was already a tendency to consider major chords as 'stable points' in music flow. For the Hypophrygian mode, the 'main' notes are E (final) and A (tenor), thus the 'main chords' are E major and A major (which implies sharpening of G and C). In this tiento, the fragments where this 'key signature' can be applied sound close to modern A harmonic minor or major. My understanding that this is an example of how 'old' Gregorian modes were gradually transformed to major/minor keys familiar to us.

I would appreciate your feedback as to what extent my guesses are right.

Thank you so much!

PS. Full score of the tiento can be found in IMSLP: Keyboard Music (Cabezón, Antonio de), Intermedios and Tientos, p. 72 (63).

This is a typical example of a modal keyboard piece from the late 16th or early 17th century. Mode in polyphonic music (as distinguished from mode in plainchant) is a complicated topic that is being actively researched by musicologists and is still the subject of scholarly debate.

It is a different way of thinking about music that just can't be compared with functional tonality. I won't go into all the complexities, but there is a difference between mode, (psalm) tone, and what were known as church keys, none of which were equivalent to tonality. (See Gregory Barnett's article in the Cambridge History of Western Music Theory.)

In general, according to Zarlino, Cerone, and other contemporary theorists, the mode of a polyphonic piece was determined by the ambitus or range of the Tenor voice and the final note in the lowest voice. If the piece ends with E in the bass (regardless of whether the final chord has a G or G# in it), and if the range of the tenor goes from B3 to B4 (or down an octave), then the piece is in mode IV, the plagal of the "phrygian" mode. ("hypophrygian"). If the tenor's range was from E3 to E4, the piece would be authentic plagal, mode III.

Some theorists also specified that the mode indicated a pattern of cadential points in the middle of the piece (IIRC, mode I/Dorian had internal cadences on F and A). About accidentals, contrary to some popular belief, it was common to use accidentals in modal music, particularly at cadences or cadence-like passages. This is connected to practices of musica ficta in which singers improvised unnotated accidentals according to certain patterns, such as leading tones at cadences. In this period, some of these accidentals are written out, and some were added by the singers. This is why you often see what appear to be "dominant" chords with raised "leading tones", or "tonic" chords at cadences with raised major thirds. These chromatic alterations were not understood to alter the mode, in fact, they were an expected part of the composition.

In this specific case, this is a genre of keyboard piece that was most commonly performed as a verset, in between verses of choral psalms, sung either in Gregorian chant with the traditional psalm tones, or in polyphonic settings based on the same psalm tones. In this practice, called alternatim, the choir would sing verse 1, the organ would "sing" verse 2, then the choir would singe verse 3, ec. Part of the organ's function was to cue the choir for the correct psalm tone, partly by the pattern of cadences and especially by the final cadence. The psalm tones (explained in Willi Apel's Gregorian Chant and at the beginning of the Liber Usualis) were paired with the modes, but were not the same thing.

Tientos were also played during the Elevation of the Eucharistic host, and like Italian elevation toccatas (e.g., Frescobaldi) these pieces are often highly chromatic (tientos de falsas).

Yes, you can call this the 4th tone. Note the points of imitation on B and E; notice that the dux and comes of the opening point emphasise C & F respectively before falling back to the final. Subsequent points (such as at the start of page 2) have similar incipits.

Note also that IV (A major) does not appear in cadences, only in the middle of phrases, and it normally leads to ♭vii. (That's to say that, in the context of this piece, A major is not stable.) Cadences using A tend to take the form of I-iv (occasionally iii°-iv, as in ms 13-14) and iv-I (notably the final cadence, but also at the start of the third system on the first page of Pedrell's edition, for instance). Cadential A is always minor.

The third system, immediately after your example, is where the sense of A as tonic starts to be seriously undercut. In addition to the plagal cadence at the start of the system, notice that the middle of the system prolongs A minor in a purely diatonic setting, and notice the cadential approach to iv is via a 6-5 appoggiatura (i.e., ♭iii6-♭II6-iv). This is a bit of an exceptional situation, but it does not make for a stable landing at all.

The third and fourth bars of the fourth system introduce a cadence that is going to show up at critical points during the piece: ♭vii6-I. iv follows I at the start of the subject entry, but in 2nd inversion, i.e., not at all stable and leading back to I. You can see here the shape of the Phrygian cadence as it came to be used in functional harmony, that is, as iv6-V-i, but the placement of the cadence relative to the phrasing and the undercutting of the mode's iv (A minor) by inversion leave the Phrygian cadence in its modal form here.

The Phrygian cadence shows up again, for example, in the middle of the third and fourth systems and the start of the fifth system on the second page of Pedrell's edition, and it doesn't always move to A (the instance in the fourth system moves to an augmented chord on F, for example).

Cabezón's career overlapped the careers of the Elizabethan composers, and he died during Monteverdi's childhood, so his work is right on the cusp of the Baroque, and some of the strains that led to the Church tones being relegated to the periphery are starting to show: the sense of modal polyphony that saw octave-and-fifth chords as perfect and used them to define cadences was already in the past; the use of functional relations in a triad-based vocabulary was starting to peek through. Cabezón establishes his mode by reliance on constraints and formulae, both cadential and melodic (including how musica ficta is used, hence the avoidance of C♯ at cadences).

Modal music never entirely went away. You can see Hypophrygian mode incorporating a wider tonal range, but using very similar conventions and constraints to establish the mode, in Bach's 6-voice prelude on Aus tiefer Not schrei' ich zu dir from the Clavier-Übung.

These all just look like a minor which modulates to the sub dominant key (d minor ). This is further emphasised in the manner in which the c# and g# resolve to the d and a respectively. Also this seems to me to be a baroque transcription of a piece that very well may have had its existence rooted in the renaissance.

There seems to be a distinct minor tonality to this piece that would not have been possible in the pre baroque era.

Not the answer you're looking for? Browse other questions tagged theory history modes or ask your own question.

46
When were the terms "Major" and "Minor" applied to keys?
4
What are the official modes from Ionian to Locrian?
24
Is F Lydian mode in the "key" of C Major?
1
Did the modes change when they came to be "expressed as permutations of the major-minor scale system"?
7
Why don’t we use the term “scale signature”, rather than “key signature”?
8
Can you help me understand Modes from the aspect of chord changes?
6
Can the key of a song be only major or natural minor scale?
15
Should mode names be capitalized?
5
Why is it a convention to number modes by their tonic scale degree relative to ionian (major)?