symphony no.1 movement 1 page 16 by the string sections

Working on Peter I. Tchaikovsky first symphony manuscript Conductor score. I came to a interesting observation.

On the same page all instruments start with a P (piano) then a few measures later get louder to a F (forte) the difference is some instruments he added an expressive, crescendo mark, while some he use's a opening hairpin. I would like to know if there is a difference between the two? If not why does he use it for one instrument yes, and others instrument no?

The symphony is no. 1 first movement around page 16. To get to look on the manuscript you can go to imslp Tchaikovsky symphony no1 opus 13.

I am both a flutist and vocalist in the USA and it looks to me like the score has the word "crescendo" written across many bars for some instruments and then the hairpin symbol referring to "crescendo" under other instruments. I don't believe there is a difference in the speed at which the crescendo would be performed by the orchestra as a whole in this case, regardless of how the crescendo instruction is notated. Hope this is helpful!

I think this is an error in the score. If I say that, it's because Thcaikovsky, in a letter to Jugensern (the editor of the score you are working on), say that few mistakes are still present in the score.

I found this on the internet:

Tchaikovsky gave a detailed account of his reworking of his First Symphony, and publication of the full score, in a letter to Pyotr Jurgenson of 15 April 1886:

'' It was written in 1866. For its performance I made some changes to it on the advice of Nikolay Grigoryevich, in which form it was performed in 1868. But then I decided to make some fundamental revisions to it. However, I did not carry out this intention until 1874. In 1875, on my birthday, you surprised me by presenting me with a printed copy of the full score. I was touched by your kindness, but very displeased with the numerous errors which spoiled the edition. But mistakes aside, the symphony was printed correctly, i.e. with changes to the theme that I made in 1874. Then it was not played until 1883. Before the performance, Albrecht sent the full score to me at Kamenka. I noticed many mistakes, and during rehearsals Erdmannsdörfer found many more, but everything was performed correctly. Then you wanted to publish a new piano arrangement of the symphony, and commissioned Langer to do it, which was a bad idea. He made this with Kashkin's help, and I checked it (during rehearsals for Mazepa, i.e. at the end of '83 and beginning of '84).

What has happened to all these?: i.e. the full score with my corrections, and Erdmannsdörfer's on the parts, used for rehearsals, and the piano arrangement—they all seem to have disappeared without trace. Now, a month or so ago, you asked where were the revisions I'd made to the First Symphony? I explained to you that there were no revisions, and that there were only corrections to the score printed in 1875, made by myself and Erdmannsdörfer. Now what do I find? You've sent Ivanov the First Symphony with insertions here and there, which I removed during my fundamental revision in 1874; i.e. all the rubbish I threw out, you have now painstakingly restored. Where did you get these discarded passages? Who's trying to annoy me? And why did you send the parts for the later version, thus contradicting the full score which had the symphony in its original form...?

And so, to clear up once and for all the state of affairs regarding my long-suffering symphony, I say again:

1) The full score of my symphony as it stands contains countless errors. 2) There should be the parts used by Erdmannsdörfer for the performance of the symphony in 1883. I don't know where they are, but they don't appear to be the ones you've now sent to Ivanov. 3) The [piano] arrangement was made very badly, and printed with dozens of careless mistakes.

4) The handwritten sheets, enclosed with the proofs you sent to Ivanov, quite outrageously contain everything I threw out in 1874, and which, for reasons incomprehensible to me, you saw fit to restore.''

To support this answer, I also had a look in some individual parts. I found that in the bass and second violin parts (I only had a look to the strings section), the publisher used this notation (instead of what was in the score):

instead of this score part : 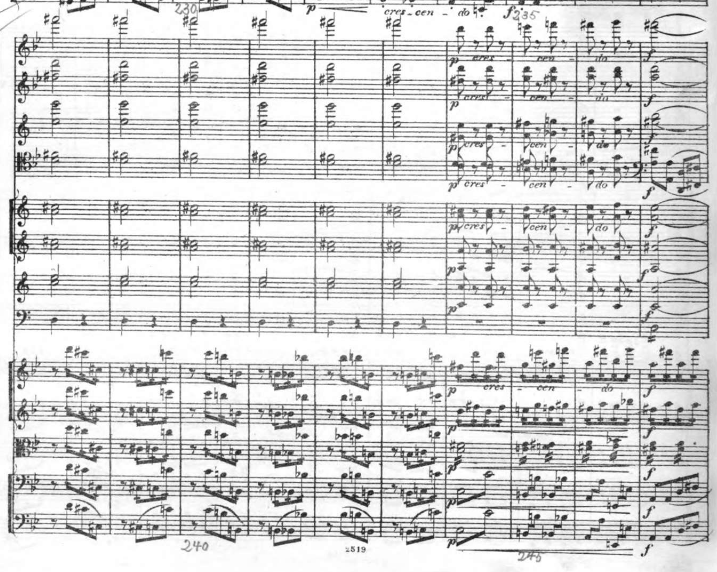 Viewing that, one can suppose that there is a mistake in the score (or in the part). I think to resolve this question, you will have to access the real score of this symphony with the annotated by the composer (because the autograph score seems to be lost).

Yes, there's a difference. I do mostly re-engraving of very old out-of-print public domain works from obscure sources sometimes, and as Tchaikowsky was well aware, engravers used to, and still do, take incredible liberties - myself included! However, I understand the conventional interpretation is that "cresc." and "dim." means "start changing the volume, and keep doing it until I tell you to do something else", and a hairpin up or down is a clear indication of how long the change in volume is to take. Hence if there's a volume change required over many bars (good ol' Rossini overtures!), you'd write "crescendo" or perhaps "poco a poco cresc." or "molto cresc.": and then write in the finishing dynamic where it is required. A hairpin drawn over a large number of bars just doesn't work visually.

Another thing that's argued about constantly is how to interpret fp and pf! One thing's for sure, pf doesn't mean start softly and suddenly get louder!

The hairpin in old music is used as a rhythmic device (rit/accel) or agogic accent. This is discussed at length in Roberto Poli's book, "The Secret Life of Musical Notation." At some point early in the 20th century this changed. In very small circles this knowledge is known, but most musicians are largely ignorant of the practice.

Not the answer you're looking for? Browse other questions tagged notation sheet-music dynamics or ask your own question.

3
Clementi Op. 42 Lesson 5 Arietta (ABRSM Grade 1, A1), use of crescendo and diminuendo
22
Why crescendo or decrescendo over one long note in piano music?
2
Simultaneous Crescendo/Decrescendo: Technique, Typo, or Spicy Meme?
3
Should loudness be maintained after crescendo or decrescendo?
0
What do crescendo/diminuendo marks mean when no accompanying text?
5
Is it necessary to put nuances indication at the start and end of a crescendo/decrescendo?
3
Sforzando but fortissimo, how to fix that?
3
Crescendo and accelerando throughout, how?
1
Enhancing the effect of Crescendo/Diminuendo in musescore