How can A minor key have a sharp chord in it?

Basically I am learning piano, so I was trying to play an Indian song 'Janam Janam' in the key of A minor. 2 chords are out of scale but they don't give a dissonant sound and melody. They are A sharp major and E major which don't belong to the A minor key.

Basically the answer to your question boils down to the relationship between chords and scales, and what "makes" a given key major or minor. In the case of the A#maj, the root is out of key (translating to a sharped octave or flat 2nd, depending on enharmonic context) but the double sharp third and fifth translate to the fourth and sixth of the natural A minor scale, so depending on what chord it resolves to there wouldn't be a big dissonance. With the E major, the G# which defines the chord as major is part of the A HARMONIC minor scale (the natural minor scale with a raised 7th) which again depending on the resolution of the chord produces a very pleasing "minor key feel".

OK, let's look at the piece. This is a very simplified version I found online, transposed into A minor (or at least with a starting chord of A minor). But it seens to line up reasonably well with the recording. 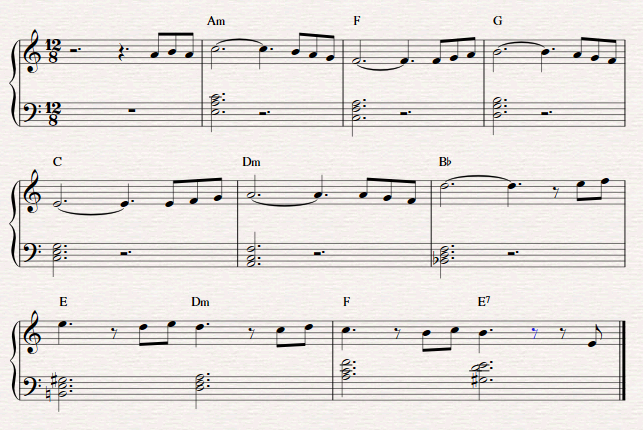 (I was expecting something more 'Indian'. This could have been written by Michel Legrand!)

We're in A minor. We rapidly re-focus on C major (but the relative major is barely considered a modulation.) The Dm chord isn't surprising in an A minor/C major environment, and the E7 run back to Am is bog-standard. So it's just the B♭ chord that's a bit of a worry.

Well, it's got two notes in common with the preceding Dm chord. We could explain it as an alternative colour of that chord. What I DON'T think we can usefully do is force it into some sort of 'cycle of 5ths' dominant relationship to the E chord after it.

I take it we're OK with E7 being part of A minor now?

12
Is it possible to have sharp/flat notes in a music piece composed in the key of "A minor"?

5
What scale are the chords Em A C D in?
4
How can I know which major and minor chords go in a scale?
3
How to get lower in scale from A minor scale?
0
Can the i, iv, and v chords harmonize any minor scale melody?
5
Is there a way to make a Minor key sound "less dark"?
0
How do I know what note is #11 in my Fmaj9#11 chord
5
How to analyze chords when you only have a dyad?
1
sharp ii dim 7th: How to use?