Alright so I'm using a sequencer that allows you to input notes and change the values of those notes, but for the note values, there are notation symbols used, the majority are quite easy to figure out, but some of them I can't figure out and I did a bit of searching too.

So, I already know that the 3 next to the note represents that it's a "triplet", the dot, represents the note being a "dotted" note. But there's a couple on there I don't understand.

The first two, what is that note with a slash through it? That same note has a triplet version too. The other being the third to last, and last note. Those symbols are double whole notes am I correct? One of them being a double whole note triplet? That doesn't even make sense to me.

Lastly, what would the lengths of these weird notes be in comparison to 1/16th notes?

It seems pretty clear that the note values go in order from shortest to longest. With that in mind, it's easy to clarify the confusing ones, which are likely only confusing because of limitations of the display.

If we suppose 96 MIDI pulses per quarter note, (PPQ), then here's a list in ascending length with number of pulses, starting with the shortest value in the upper-left:

The slash on the notes could be a tremolo (third note) :

Yes, the third to last and the last seem like a double whole note. They could have a triplet. All the note values can; I've never seen such an example myself though. 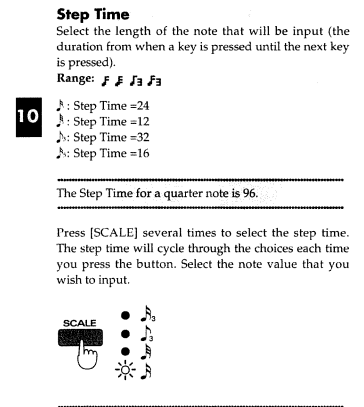 16
What are all these symbols in some old sheet music?
9
Is there any difference between these two note values?
3
Voices doubling a dotted note in Lilypond
7
How to clearly notate tuplets, both "simple" and "complex," in irregular meters
4
How do I have MuseScore continue notes in bass clef thats are input in treble clef?
1
Dotted 8th note in a triplet swing rhythm
9
Orchestral score has inconsistent time signature changes and note lengths
3
Placing rest symbols according the convention of the time signature