Why are Clavichords Keys Diagonally Shaped?

Why are the keys on clavichords (as shown below) not all parallel? 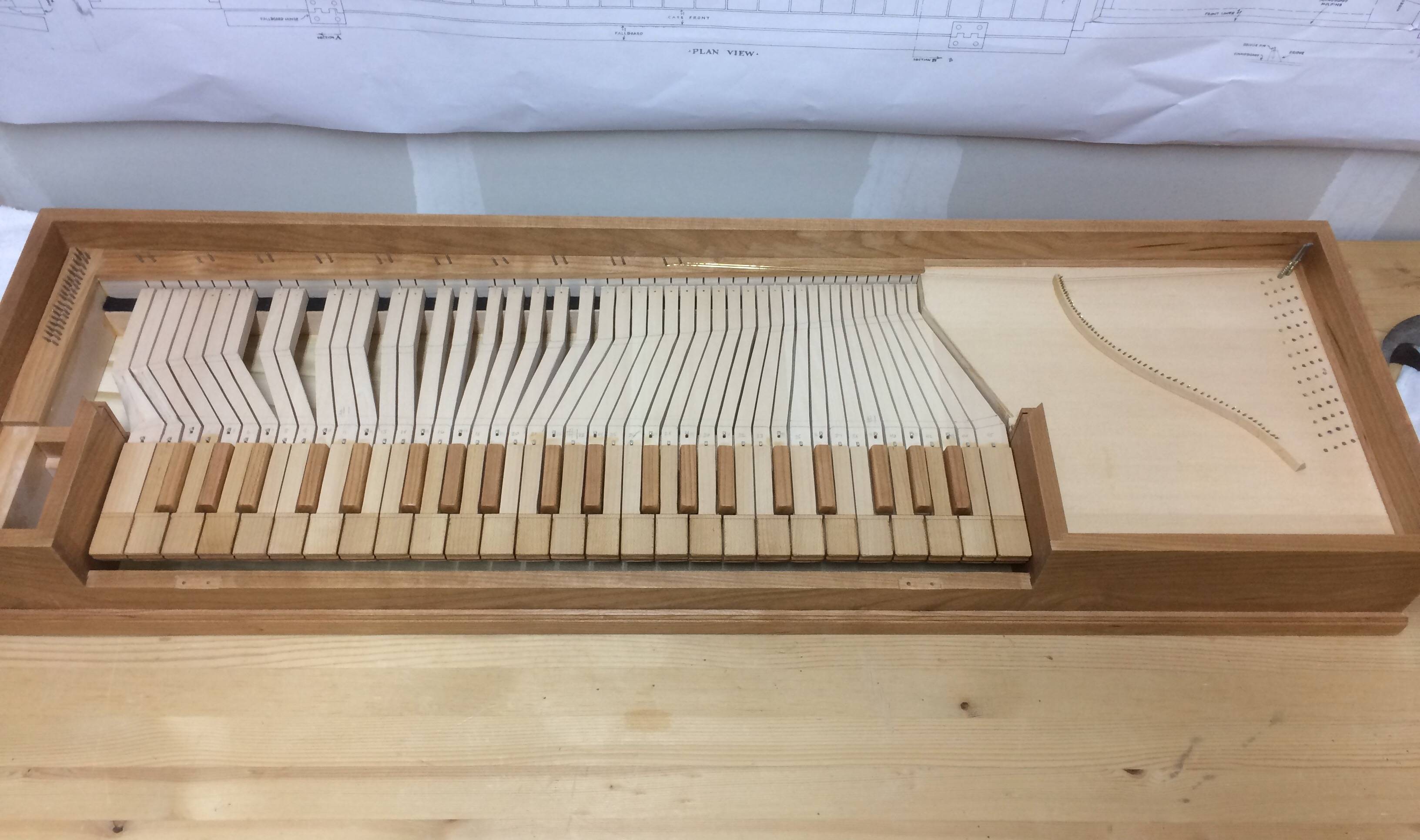 In fact, only 1 or 2 of the keys go straight back, the others all bend diagonally and then go straight at the end.

Why is this? I would assume it has something to do with how the keys hit the strings but I'm not exactly sure.

The reason this clavichord's key arms are cranked (as they say) is because it is a fretted clavichord- that is, most of the strings play more than one note, depending on where they're struck. And as the strings get higher and shorter, the places they are struck that will produce a half tone of difference (say, between Eb and E) get closer together.

In designing a fretted clavichord, the positions of the strings and the keys are juggled to try to reduce this cranking as much as possible, because it's mechanically not ideal. Unfretted clavichords, which have one pair (usually) of strings to each note don't have this problem and can be laid out with straight key arms. However, even unfretted clavichords usually crank the arms a bit at the top of the range to prevent the bridge from having to be radically curved back.

The OP's picture is a half-complete instrument. The tangents (the vertical metal pieces that press the strings) and the strings themselves are not yet in place, so it's hard for a "non-expert" to understand how the finished instrument will "work".

The pictures in the Wikipedia link are of complete instruments, but the back of the keys is partly covered by the felt dampers which stop the "unused" part of the strings from vibrating.

The tangents will be at the end of the dog-leg part of the keys, i.e. in a diagonal straight line running across the instrument. The "working length" of the key levers is thus shorter in the bass than in the treble, which applies more force to the bass strings for a constant finger-pressure across the whole keyboard.

The strings run in a parallel band at an angle to that line, with the bass strings at the front and the treble strings furthest form the player.

The geometry of where the strings must be "touched" depends on the shape of the curved bridge (on the soundboard at the right) and where the left hand end of the strings are fixed. The bass strings extend to the left hand side of the instrument but you can see the pins for the treble strings along the back of the case. (The positions of the tuning pegs for the strings, on the right hand side of the soundboard, have been marked out, but the pegs are not yet fitted). Any intentional variation in string tension between bass and treble, also affects the geometrical layout.

The second part of the dog-leg "behind" where the tangents will be, is just a matter of fitting the keys into the case. The back of each key is slides up and down on a metal pin fixed into the back rail of the case, to stop the keys wobbling sideways. Therefore the back of the keys need to be wide enough to contain the slots for the pins without the risk of the wood cracking, and more or less evenly spaced along the back of the instrument.

All these geometrical compromises apply to both fretted and unfretted clavichords. The main difference in design is that fretted instruments have fewer strings (since two notes share the same string and can not be played together) which reduces the "depth" of the instrument from front to back.

Incidentally, keyboard-making was considered to be the most skilful woodworking task in building these early keyboard instruments. To avoid problems caused by the wood warping, the traditional way was to cut the entire set of keys out of one solid plank of wood, so that after cutting (using nothing but hand tools, of course) any changes in temperature and humidity would warp them all in the same direction, and minimize any problems with adjacent keys jamming against each other. Make one mistake, and the whole keyboard was firewood!

Clavichords work by shortening strings according to pitch. They keys all have the same distance, but the distances of shortening are spaced logarithmically like on a guitar fretboard. While this is somewhat masked by the overall distribution of notes across the strings (and the geometrical arrangement of the strings themselves), the higher pitches per string still need to be accessed with shorter distances.

The angles of the key mechanisms on the clavichord enable positioning the tangents which strike the strings along different points of the length of the string, resulting in the ability to play different notes on one group of strings. 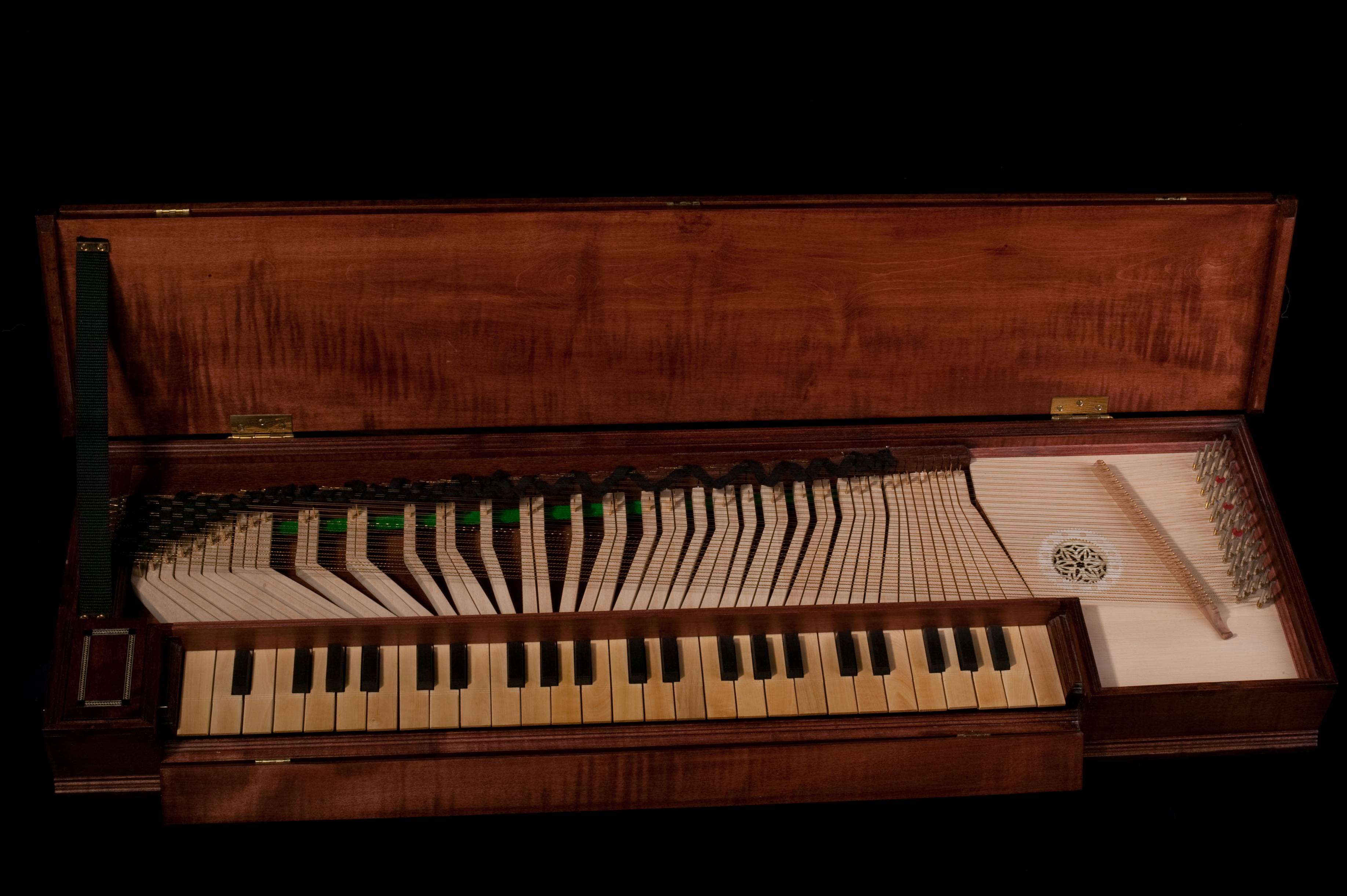 Here is a clavichord with three notes per pair of strings. Click on the original image to see it in much larger detail.

Not the answer you're looking for? Browse other questions tagged instruments or ask your own question.

19
Is the sound of a semi-hollowbody guitar significantly different from that of an equivalent solid body?
25
Why is music for strings more likely to be in keys with sharps?
1
How would this woodwind's shape affect its sound?
3
Troubleshooting Roland analog synthesizer's 'moving' dead notes
2
Which wind instruments do not change pitch when blown harder?
10
Why can a vuvuzela only play one pitch, while a non-valved bugle can play many?
15
Genetic limitations to learn certain instruments
4
Is it normal for oud strings to touch other pegs on the head?