How are three input speakers wired?

I had a gig last week and played (guitar) over a shared 2x12" speaker. After plugging in my stereo amp the sound was "strange" and delayed for about half a second. The sound guy blamed my effect board, but after some investigation I noticed that the speaker had three inputs labeled input, parallel and serial. I accidentally plugged in my amp in the serial and parallel sockets. Taking no chances I switched to a mono setup and plugged into the input input. Sound was back to normal.

Now I am wondering: how is such a three input speaker wired? And how can the strange delay effect be explained?

Ok, I think here's what happened:

Here's how a serial output jack is wired: 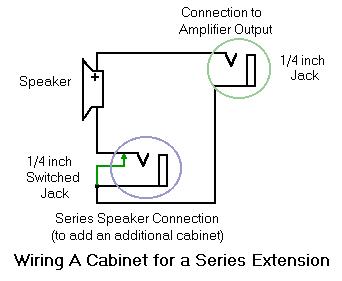 Here's how you can have both jacks in one cabinet (imagine the parallel in not being there and the serial out being a switched jack as above):

Note that if the input is wired a certain way, the outputs can be used as inputs instead, depending on how you plug in. Even with that in mind, it's better to consider the "Parallel" and "Serial" jacks to be outputs, in general.

Not the answer you're looking for? Browse other questions tagged guitar amplifiers speakers or ask your own question.

2
How can I connect speakers to my POD 2.0 and get a good sound?
0
Using Headphone socket for monitor speakers
8
How to connect a line signal to a guitar amp?
2
How do I troubleshoot guitar speakers?
5
stage monitors as stereo speakers?
3
Can an amplifier with only one output be wired in parallel?
0
Killed an amp through audio interface in the effect loop?
5
How should I wire multiple speakers for a live performance?
0
Are stereo speakers suitable substitutes for studio/rehearsal monitor? What amps/preapms are required?
1
Blown (?) speaker, or swapped poles?