What first to put in effect chain (order from guitar cable input) -- distortion or effect processor?

What first to put in effect chain (order from guitar cable input) -- distortion or effect processor?

If by effect processor you mean modulation effects, reverb and delay, the standard sequence would be distortion -> effects. Distortion after delay or modulation is a bit like using one distorted amp with two guitars at its input (remember the old days?) It creates a lot of intermodulation products which can sound annoying. However, try everything and you might find certain sounds for which you prefer to have the distortion after other effects.

One effect which is very often used before the distortion/overdrive unit is a wah-pedal. This mimics the use of a wah with an overdriven amp, where the wah also comes first, and then the signal is distorted by the amp.

Here's an article that gives some plausible answers, though I must warn you that just about every conclusion is followerd by a list of exceptions! I like his mnemonic for the order of effects, reproduced below. (For "overdrive" read "distortion".) 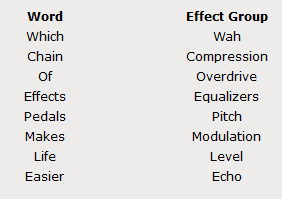 One rule of thumb is that effects placed later in the signal chain (or, if using a multi-effect, blocks placed later in the chain) will often be the ones that play a greater part in dictating your overall sound. So while guitar → distortion → reverb may sound spacious and ambient, with clean reverb applied to distorted guitar, guitar → reverb → distortion can cause the reverb to be distorted too, giving a more 'grungey' overall sound (which can be good for surf guitar, for example). So while you could experiment with distortion after other effects if you want a very distorted and grimey sound, you're more likely to want to have other effects later if you want to hear a cleaner version of what they do.

Having said that, this consideration depends on how much distortion you are applying. If you are (for example) only using the multi-effects to add a small amount of delay, and the delayed notes are much quieter than the 'clean' signal, there might not be much perceived difference as the delayed notes on their own wouldn't drive the distortion into clipping.

One situation in which you almost certainly want distortion first is if you're using a traditional style fuzz that 'expects' to have something with a relatively high output impedance - i.e. the guitar pickup - before it in the signal chain. Some of these will sound very flat, or self-oscillate, if they're plugged into the output of a multi-effect (which will generally have much lower output impedance).

A situation in which you might want to consider having the distortion later would be if you have it set to output a very high output level which your multi-effect cannot handle (for example if it clips, or activates some auto-gain reduction which chokes your playing dynamics).

Sometimes the pre-amplifier part of your guitar amp will induce its own distortion, *so that a part of your chain is effectively → distortion anyway*. The standard way around this is to use your other effects (perhaps delays, reverbs, phasers) in the effects loop of the amplifier (though you may need to ensure that your effect processor can handle the level of signal in the loop).

See also Why does pedal order matter?, although that is not specifically about distortion.

It depends what sort of sound you are after. Some guitarists, such as Gary Arce of the band Yawning Man, make great use of applying overdrive after reverb in their signal chain. This gives quite a blown-out and indistinct tone, but it works in some settings quite well.

I always think of effects orders thusly; if it was meant to be done a specific way then you wouldn't be able to run pedals in any combination! Experimentation is key.

My only word of caution would be about placing an overdrive or distortion after a digital multi-effects unit. I've found that one or two of these units (I had a Zoom 606 and Korg AX10G back in the day) can produce unwanted noise, such as a high whistle, which is amplified by distortion. Part of the issue could be the 9 Volt adaptor used for the multi-effects pedal. I had a loan of a Zoom 505 for a while and it produced a high-pitched whistle running on any power supply, including the Zoom-sanctioned "official" wall wart it came with.

16
Why does pedal order matter?

4
What do I need to look for in a Y splitter for guitar?
7
Is there a way to keep my guitar/bass cable from becoming unplugged when I move?
1
Unwanted distortion from a guitar transducer
0
Electric guitar effects and amplification
1
Is it possible to create an effects loop with an amp that does not have send and return, with a mixer?
1
Any recommended plan, sequence, methodology on self-learning the vocal effects?
3
What kind of equipment do I need to hook an electric guitar up to a PC and use software effect processor?
2
What is the signal chain for a rackmount guitar interface, audio interface, and a power conditioner?
0
How to connect multi-effects processor to guitar amp?
2
Mainstage external send effect with RME TotalMix