Say I have the following sources:

And I would like to use a single pair of bookshelf speakers (potentially Dali Zensor 1) for all three. It doesn't have to be simultaneous, but it's good if there is no need for rewiring every time I switch sources.

Here's my question: what equipment do I need for this to happen? Bonus question: is this a bad idea?

Do I only need an amp that would have 3 inputs?

PS: equipment references are mentioned for clarity but just the type of equipment actually matters (i.e., a guitar, a keyboard and a computer through a single pair of bookshelf speakers).

PPS: the reason I would like to use a single pair of speakers is mainly to gain space, but minimalism, vanity, and all sorts of other reasons might apply.

(Originally written as comments, but moved to an answer as it got too bulky)

First of all let me say on my living room setup I now use a mixer (and have voted for Todd's answer). But to answer the question and show it can work, here is what I used to do:

I have a standard (if old) domestic amplifier and speakers. The amp has around six or seven inputs, if you include the "Tape" inputs. (Rotel RA-940BX amp, Mission 731 speakers on decent stands; all reasonable mid-range domestic hi-fi equipment at the time.)

I used to have various sources, all connected to Line inputs on the amp. Guitar preamplifier, a keyboard or digital piano, some other synths, and my computer. Some of these had only headphone outputs, so I used long 3.5mm jack to RCA/Phono leads for these.

Simply select the input you need on the amplifier, set the volume you need, and blast away.

Possible disadvantages of this method:

So - subject to one's taste and to whether one believes speakers will be damaged by certain instruments - running sources directly into a domestic stereo is fine.

But finally - as I stated at the start - for home use I now prefer Todd's solution, being an electronics hobbyist I built a simple mixer and now can play along to music, or watch films on DVD and plink away at those Hans Zimmer soundtracks on my piano, synth, guitar or electric ukulele. That's far more useful than selecting a single source, to me. Are you not entertained?

The best thing, especially if you plan to grow as a musician into the future, is to get a compact mixer. Like this: 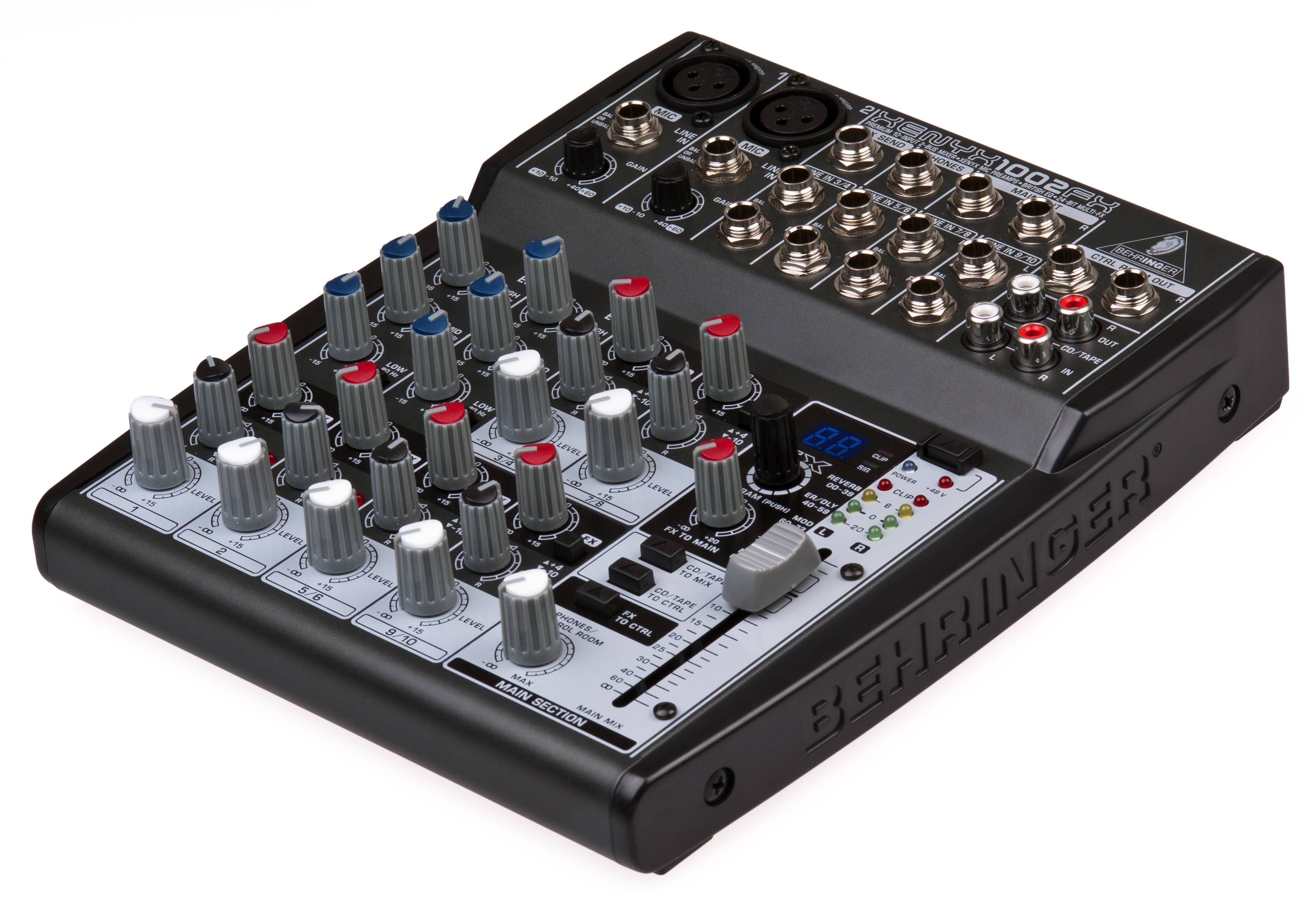 It will solve the immediate need and give you the ability to combine other sources as needed, such as another keyboard or a portable music player or phone or who knows what. Also, it can be very helpful if and when you start making home recordings. The one above has two microphone preamps which you can use to amplify and record professional audio microphones. The primary advantage that a mixer has over a traditional audio receiver which can switch between multiple sources is that with a mixer you can listen to all of the connected items at the same time. So you could play your guitar along with music coming from your laptop or you can hold down chords with a sustain pedal on the keyboard and then play little guitar solos.

Musician stores and online retailers have a wide variety of options in compact mixers. Even Amazon sells them.

It's a good idea to have a compact mixer around. The only part of your idea that might not turn out so great is that running an electric guitar output to a mixer and then to bookshelf speakers may not sound very good, depending on the exact details of the setup. Otherwise you will probably be fine. Eventually you may want to grow into two separate audio setups - one for musical instrument purposes (keyboard and guitar, etc.) and the other for entertainment (MP3s, movies, video games, etc.). If you get an audio interface for your laptop, then your laptop can be connected to both systems. The audio interface for music would be connected to the musical instrument sound system, and the regular output from the laptop would be connected to your entertainment sound system.

A passive device like this can be used to connect the line outputs to the sensitive enough input.

Without the power source, they may be somewhat easier to use, cost less and the quality may even be better without unnecessary amplification step. I use such a device. It has four controls, one per channel, and supports the four inputs. The mixer in the picture has over thirty - the only hope to get them right seems that maybe some middle position is always good enough.

The level regulators make sense even if you do not use the signal sources together. Setting comparable input level for all inputs is one time action that means less care about the volume controls when you switch the devices.

Not the answer you're looking for? Browse other questions tagged amplifiers equipment or ask your own question.

6
using multiple stereo effects
12
What to look for in adding a noise gate to electric guitar setup?
8
How to connect a line signal to a guitar amp?
0
Monitor setup for electric guitar practice - How to match Home vs. Stage?
1
Recording setup for live performances with various sound engineers in various venues
1
Setup for project reusing old PCs?
1
How to monitor multiple instruments via headphones?
0
Multi FX Processor-Headphone setup vs amp setup