How to take care of a microphone?

Does a microphone (the transistor and electronics inside it) last forever? Is there any chance for it to get broken from normal? How can I treat them right, so they will last longer?

I'm talking about microphones in general: condenser, dynamic, and ribbon ones.

In general, Dynamic Mics are the most durable. That is why they are so popular for stage use. There are some electrical soldier joints inside (connected to the diaphragm) that could potentially come loose if the mic was dropped and the metal contacts could corrode if exposed to environmental extremes or if exposed to excess moisture. Other than that they are almost indestructible - as long as you take basic precautions and don't drop or otherwise abuse them.

Condenser mics have more electronics inside the capsule and consequently are a little more fragile. Many are still used on stage, but it is important to handle them much more gently and protect them from trauma.

Ribbon Mics are the most fragile of the ones you mentioned and consequently are used more often in the studio. If used in a studio setting, they can live in a corner of the studio on a shock mount and thus not subject to the stress of packing them away and unpacking them. If they are transported, a shock resistant hard shell case is the way to go. Not a good idea to subject a ribbon mic to the rigors of stage use.

I keep my stage mics in their padded case. I also put a foam windscreen on the grill for added shock resistance during storage (I don't perform with the external windscreen unless I am outdoors). I also wrap the entire mic inside it's padded zippered case, with foam koozies. Then I put all my mics inside their respective zippered bags - into a padded shock resistance mic bag.

I always carry extra mics but I have only had one failure in my life.

EDIT: From what I have observed personally, one of the most common and egregious ways that microphones suffer crippling damaged on stage is when a microphone clipped on a mic stand does a face plant onto the stage (driven by the stand) when the stand tips over. This is most likely to happen during set up and tear down for your show.

To prevent this tragedy, follow these tips. Never put the mic in the clip on the stand until the mic cable is fastened to the stand and connected to the mixer or snake. The stand is more tippy before the cable is attached. The cable adds some counter tension and weight to the stand, especially if it's taped to the floor after it's clipped or cable tied to the stand.

Make the microphone one of the last things that get's installed during set up. When the band or crew is wandering about the stage pulling cables and moving monitors, etc, there is a greater chance someone can knock over a mic stand. If that happens, you don't want your mic to be attached to it. Also, during set up, the mic stand could be pulled over while pulling the mic cable to the mixer or when someone wandering about the stage during set up trips over the cable.

For the same reasons (stand more tippy when mic cable removed and increased activity on stage) take your mic off the stand first, at the end of the gig - and put it in it's case and mic bag immediately so it does not get tossed into someone else's gear bag by accident in the rush to get packed out.

Another thing I do with my boom mic stands (besides use a heavy stand), is use "sand bags" (which actually have lead shot in them instead of sand), to weigh down the legs of the tripod and increase stability. Be sure that you rotate the base of a tripod boom stand so that one leg and the boom are close to parallel. You can also throw a sand bag on a round base stand to add a little more stability to the base if you use a boom arm with a round (or similar non tripod) base mic stand.

If you don't want to buy sand bags you can make them yourself with lead shot or BBs and a small draw string bag (Crown Royal bags work great). I have also used leg weights or wrist weights. The doughnut shaped padded wrist weights can slip on a round base stand to add a little extra weight and stability.

Pictured below are some of the things I mentioned, as well as a padded hardshell mic case that you can buy if you carry multiple mics and don't mind spending the money. 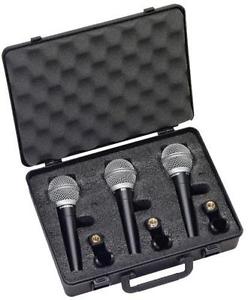 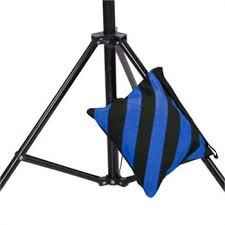 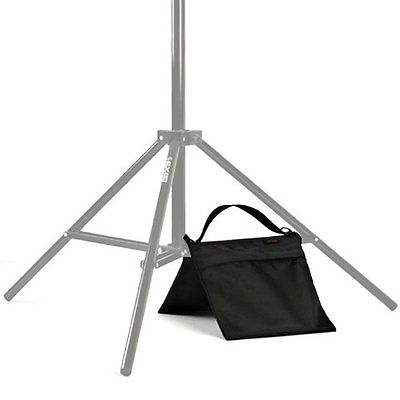 As others have alluded to, a well made microphone, used in the manner it is intended, and properly cared for, could potentially last a lifetime, with little or no maintenance!

Mics, like any other electronic device, can suffer component failure - but if we're talking other than hardware failures, broken condensers, ribbons etc, then the average lifespan of a mic can certainly be measured in decades.

Currently in my mic case the youngest member, a well-gigged SM58 is a mere snip at about 15.

The grandaddy in there is a U87 from possibly the early 70s [correction, it's a 1980, see my note at the end], making it a good 40 years old [only 35 now]. [I know its provenance, but not its date of manufacture - I'm only the second owner, the first was the BBC, but they used to have things made to particular spec - i.e., the body is painted battleship grey rather than the usual polished steel]

The BBC used to have a policy of replacing the capacitors in every piece of equipment on a schedule [every few years, not certain the exact period] so this 87 may have received that sort of attention for the first half of its life, but not in the last 20 years or so. It's in pretty much daily use & still sounds to all intents & purposes just like a new one.

They don't need any particular care & attention, however a few simple tips...

whilst writing this answer, I've discovered how to date a Neumann... so I've written to them & hope to eventually find out :)
...and wonder of wonders, I got an answer the same day. It's newer than I thought, a mere snip of a lad at only 35 years old, made 1980

Dynamic mics are pretty bomb-proof, and genuine ones will last almost indefinitely. Cheap Chinese copies not so... They're almost designed for dropping, knocking, being run over, etc. 'Cos that's what may well happen during their hard lives. Ribbon mics not so. The ribbons are very delicate, and won't cope with being dropped. I know, as a student dropped two of my (£400) Beyer ribbon mics. He's still not forgiven! Condenser - not sure. But as stated earlier, whatever mic is used on a gig, it's certainly amongst the first bits of gear to be packed safely.

Taking care? never let anyone else touch them, particularly smokers and people who test them by banging them. Or lipstick wearers...The sponge inside the head needs replacing periodically, the socket and switch sometimes need a dose of switch cleaner, and it needs to be kept in a shockproof case/bag, so if it does get knocked or dropped, it won't get hurt.

11
Should I replace unwound strings on my acoustic guitar as often as the wound ones?
18
How do you care for your guitar?
5
Electric Violin care
1
High-end headset/lavalier mics vs handheld for vocals
6
Home recording: Preamp or Dynamic Mic?
7
What is causing this weird distortion coming from my amp?
2
Does a Dirty Piano on the Inside Affect Action and Sound?
3
What cable do I need from Dynamic mic into mixer and why XLR to TS but not XLR to TRS?
0
Can a 600Ω XLR dynamic microphone be directly connected to a standard sound card?