Does the old Druid song, Les Series, have an ancient melody as Villemarque charted it?

This may be too long and specialized for many, but I'll put it up and see what kind of interest or reaction there is:

Some of you may have heard of the old Druid number tutorial, Les Series or Ar Rannou, that was charted by Viscount Theodore Villemarque. In 1845 Villemarque publishd his Barzaz-Breizh collection of old Breton songs. He laboriously recorded by hand in notebooks the oral tradition songs in very obscure Old Breton dialects he heard from the local peasants in Brittany. This was an old Celtic region, sharing tradition and people with Cornwall, across the English Channel.

Villemarque got the melody and lyrics for one of these Druid songs, known variously as "Les Series" or "Ar Rannou," from a young peasant of the parish of Nizon whose mother had taught it to him ("to form his memory"). My gut feeling as a musician about the score he wrote after hearing the young peasant sing it to him makes me believe the melody he published in 1845 is probably close to the old Celtic melody that would have originally been known pre-Christian era in Brittany/Wales/Cornwall. It is given in the key of Bb, appearing to be used as the G minor scale (the relative minor of Bb) in the song melody given.

Here is the score Villemarque wrote after hearing the young peasant sing the song: 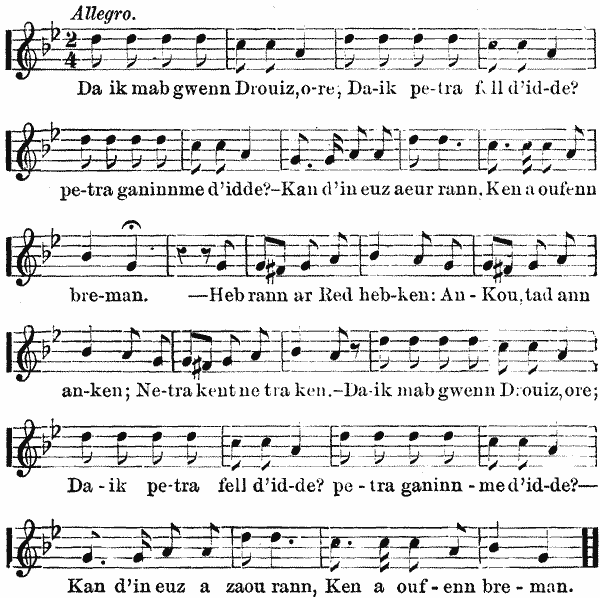 Towards the end of this long post is a link to me roughing out the melody charted above, as well as a link to a modern fusion jazz band interpreting it.]

I know the lyrics/thoughts have survived the 20 odd centuries embedded in a number chant, a not uncommon way for the common people to keep alive complex history and thought without writing, i.e., the lyrics given do seem to be Druid era thoughts and memories (I'll include a link to the lyrics translated below).

I'm thinking that c. 100 BC, for example, there may have been Druid singing accompanied by ancient Celtic harp or lyre, something with 6 strings (like the one found at the 600 AD Anglo Saxon burial site at Sutton Hoo) or maybe a few more, likely tuned to a G pentatonic scale, G A B D E, with a melody being free to hit a C or Bb to make the Ar Rannou melody alongside, or with those strings or tunings added, etc. Here is a link to a good discussion of the Sutton Hoo harp, which is within a few centuries of the Druid period I am discussing:

So, my question is does the Les Series melody seem like one that might have been sung by Celtic Druids around Brittany/Wales/Cornwall 2 thousand years ago and if they accompanied with harps of that era, what were its likely tunings (and that goes to the question of how ancient the melody charted is). Here is a link to an excellent translation and discussion of Ar Rannou:

And finally, here is a brief ad hoc run through I did June 2015 on a six string guitar (croaking like an old Druid vocally), offered as an audio sample of the charted melody. I have no idea if the chords I added were used in ancient times. I alternated D and C in the first portion (verse) and then transitioned to Gm - Bb - C - F ascending behind the melody of the refrain. It seemed natural to me, but I grew up with Western diatonic scales. I suspect the ancient Celts may have used more diatonic accompaniment (say a third or a fifth) than is generally acknowledged, since the likely string tones included those possibilities, and the songs we have from 1200 or so (for example, Sumer Is Icumen In) demonstrate long-time familiarity with diatonic melody and harmony.

Link to me roughing out Ar Rannou/Les Series (just a couple of verses):

Here is an interesting link, off the topic, but very cool, the French fusion jazz band doing their interpretation of Les Seris/Ar Rannou live 2011:

If you accept some form of the celto-scythian hypothesis, then we can establish some parameters that a Celtic liturgical tradition might have followed. It would be approximately that of the classical Greco-Egyptian tradition of several hundred years earlier. This would put us somewhere around the time of Pythagoras or between him and Plato.

So the music would IMO be confined to Church Modes, specifically the Aeolian and the Ionian. So that would rule-out effects like the raised 7th shown here.

There would also be a tendency to conceive melodies "upside-down" from our point of view. This is because the root or tonic of the scale is the highest pitch. (I imagine this would arise naturally from the lack of a concept of a *reference pitch* when tuning a lyre. If you don't want to snap your high string when you get to it, you must *start* with the high string and then *descend* to the longer/lower-tension strings.) This example does seem to follow this conception.

There would also be a tendency not to complete the octave, as this was a later invention. Octaves (and double-octaves) would be used for part-doubling, to allow male and female voices to sing together. Polyphony as such was a later development (according to legend it was developed by the Celts and brought to the court of Charlemagne by a Hyperborean Monk (Druid?)).

Not the answer you're looking for? Browse other questions tagged scales history string-instruments harp celtic or ask your own question.

4
Was the ancient Greek philosopher Pythagoras the first one who referred to a musical scale?
9
Why are the black keys on some ancient fortepianos now white on modern pianos?
12
In ancient Greece, did they use the Pythagoras discovery of ratios to create tetra-chord?
3
Why do very old pianos have only 85 keys?
4
What are the characteristics of Late Romantic Russian Music?
13
What kind of musical scales did the ancient “pagan” tribes use before Roman/Greek contact?
1
Why is the Proper Sarum mode notated differently than it sounds (in the Yattendon hymnal)?
8
How did the ancient Greeks notate their music?
3
Does a melody ending on the 6th degree mean that the section of a song is in aeolian mode?