Are notes that are a diminished second from a chord tone considered part of the chord, or are they considered an NCT?

For example, if the chord contains an F and there's an adjacent E#.

There are no chords that has a diminished second as part of the chord for the obvious reason that the enharmonic equivalent of it would be a perfect unison which is already part of every chord.

If you do come across one, just view it as a unison instead of a second as that's almost surely how it's being used.

But, I can think of two (theoretical) chords, both would have to be inverted.

A chord with a doubly diminished ninth, for example, C-E-G-Bb-Dbb.

A fully diminished vii chord with either an added flat-ninth or an extra minor third on top, for example, C#-E-G-Bb-Db.

The reason you won't see these as functional chords is because of how they would have to resolve. Generally, a flat 7 (relative to the root, like a V7 chord) resolves down, even if the chord is borrowed from another key. So in both cases, the Bb wants to resolve to an A. The Db or Dbb also wants to resolve down to either a C or a Cb. In both cases, you're resolving a chord tone to a half step below the previous root, which is a bad idea.

But you're like me and you know the GA likes creativity.*

I think you MIGHT be able to make a case for an inverted borrowed fully diminished vii in a 5 part composition. But I don't think it would add anything to use the diminshed 2nd. 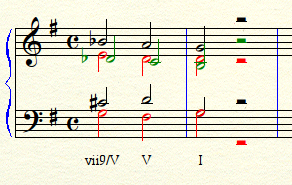 The chord symbol here should actually be more like:

*note. Even if you know the GA likes creativity, you might want to be sure you submit on a day when s/he has nothing else going on. Otherwise you might still get a bad grade. And I can't figure out how to avoid voice crossing.

From a written point of view, no, it should be considered an NTC. Take the example above, with an F in the chord. If there was also an E# named, it couldn't be seen as a consonant part of that chord. However, from a sonic point of view, no-one would know anyway.