Chord name does not match the notes it's written above

Sometimes I find the chords above a guitar tab hard to understand. For example, in this piece:

There is a C chord written above the first bar even though the note beneath is a single open E-string note.

Why is a C-chord meant to be played over this note?

Your question is vague, but I think you mean why is the chord C marked while the tab shows E - top string open. The chord C is the accompaniment, and is the correct chord to strum while the tune is being played, at that point. The TUNE itself goes E-E-E, which happens to be the 3rd of the underlying chord, C. This is commonplace with tunes, that the note played in the melody is also found in the accompanying chord — otherwise something sounds odd.

A chord is not the same as a single note -- it is an abstraction that represents a combination of multiple notes that sound good together, including those that can be used in the accompaniment parts. In this case, you have a C chord, which represents any combination of C's, E's, and G's.

So in your first two measures, you have the notes | E E E | C D E |. The chord symbol 'C' means that these notes can be harmonized with any other C's, E's, and G's.

Incidentally, you'll notice that one of the melody notes (D) doesn't even appear in the chord. When this happens, it's called a "non-chord tone" or a "non-harmonic tone", in this specific case, since it's part of a scale between two other chord tones, it's also called a "passing tone".

Have a look at the notes in a C-chord: 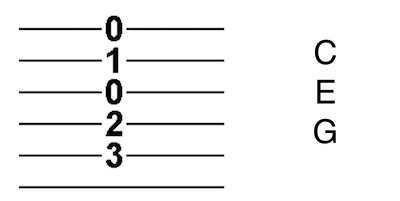 The notes of a C-chord are CEG (C, E and G) and as you can see, there is a high-E note played when you play the chord on guitar.

This means that the E-note is part of a C Major chord, and so it actually makes sense for this chord to accompany an E-note played in the melody.

It is actually very common for a melody to contain certain notes from a chord, and in your case the melody (E-E-E for the first bar) contains the E-note from the C-chord.

Not the answer you're looking for? Browse other questions tagged theory chords notation or ask your own question.