Was Bach the first to use thumbs on a keyboard?

This question reminded me of a claim that I've heard before, namely, that J. S. Bach was the first keyboardist to utilize the thumbs in his playing technique. I'm not sure where I've heard this, but believe I've seen it in several places, always unsourced. The claim sounds incredible, given the age of keyboard instruments (some organs even date to BC), that no one had ever thought to try using their thumbs before. But perhaps I am biased by the perspective of modern technique.

Original sources, or modern scholarly research, are preferred, where possible.

Claims of this nature are properly subject to a certain skepticism, I think - Alessandro Scarlatti (of the previous generation to Bach's) specified the thumb quite liberally for his first Toccata. (IMSLP has the Shedlock edition, which is fairly assiduous about following the manuscript.)

(Sorry, this was to be a comment continuing on the previous thread, but I wanted to include pictures) 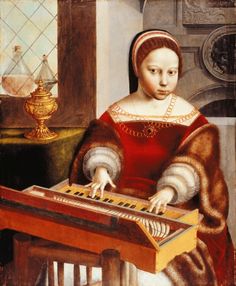 This picture was used in a video class I've seen, by Prof. Craig Wright from Yale where he corroborated the perspective that primite (late medieval/early renaissance context) keyboard playing was done without using the thumbs. He also referred to what he called the "3 over 3" method used afterwards until Bach's time, which seems to be the same thing as the finger crossing mentioned by Rockin above.

Another source that corroborates this view is the "amateur" harpsichordist (he recorded the integral Scarlatti sonatas in his custom built harpsichord!) John Sankey. His site has a wealth of information and references about ancient keyboard playing, specially the harpsichord.

Apparently this "3 finger" approach was state of the art until C.P.E.Bach's "True Art of Playing the Harpsichord", where, thumb crossing is given some relevance. Quoting from Sankey's site, «Five fingers can only play five notes in a row. To extend this range, there are two main techniques: the turning under of the thumb and the crossing over of the fingers.(C.P.E.Bach, 1753).»

I wonder if it is a coincidence that C.P.E. was among the first to write for pianoforte. I don't have any experience with the harpsichord, but I've been told it has a ligther touch than the piano, probably requiring a different technique to optimize speed and fluency. Could it be the relatively stronger touch of the new pianoforte that prompted the adoption of new techniques? Anyone can coment on this idea?

Having played both piano and harpsichord, let me throw another idea out there on top of all the excellent academic sources people have quoted:

In harpsichord it does not matter how hard or soft you hit the key (since it plucks rather than hits the string). Good technique is, thus, centered around control of the "touch", and typically the goal is to keep the finger as close to the key as possible. (This is referenced, for example, in Couperin's L'Art De Toucher Le Clavecin on pg. 11)

The thumb, being shorter than the other fingers, presents a specific challenge to this goal. Playing a key with the thumb, particularly an accidental, risks tilting the rest of your hand and sacrificing the closeness and control of the other fingers to the strings. Notes played with the thumb also tend to be play with the finger slightly tilted, which also sacrifices some control.

So no, Bach was not the first composer to use the thumb. As the harpsichord transitioned to the fortepiano (certainly during CPE Bach's lifetime), avoiding the thumb became less important in good technique and CPE might have boasted about his father being in the vanguard of Classical technique.

CPE Bach certainly made that assertion about his father, but remember that they both had very limited access to anything except "contemporary music", compared with what is available to anyone today.

In fact, some 16th century keyboard music is a significantly more technically challenging than much of JS Bach. For example look at the piece on pages 34-39 in volume 2 of the same collection http://imslp.org/wiki/Special:ImagefromIndex/05178. Even the Goldberg Variations don't have fast scale passages in double-thirds and double-sixths played with one hand!

Do we have any knowledge of thumbs being used in keyboard technique prior to Bach?

About 150 years before Bach, several books like "Declaracion de Instrumentos" (Bermudo, 1555) and Arte de tañer (Santamaría, 1565) allow the use of the thumb. From the later book:

In English: "Thumbs are not allowed for black keys, except when playing octaves, with any hand, or when there is no other alternative".

Not the answer you're looking for? Browse other questions tagged technique keyboard history j-s-bach or ask your own question.

2
How to play the piano using less than ten fingers

7
When was the first recorded usage of a musical score?
5
When was music theory first studied?
6
What clef was first?
2
The first asymmetrical layout keyboard
7
Has the Bach Compendium been completed?
2
Did Bach use a pendulum clock as a metronome?
8
How can I learn thoroughbass?
4
was the 12/16 measure usual in the time of Bach?