I have a HP302 Roland digital piano. It has a usb connector that easily plugs into my computer. The problem is, Reaper is not picking up the piano. It sometimes will say something along the lines of:you've disconnected Roland digital piano but that is it. Im not looking to spend money on an actual MIDI keyboard since Im on a budget. Why won't Reaper pick it up when Garage Band picks it up fine? I would use the audio recorded in Garage Band and upload it in Reaper but for some reason, when I play it in Reaper, the recording is much slower and at a strange pitch. So I feel my only option is to record in Reaper itself. Does anyone know how to get Reaper to detect the piano?

Edit: @Caleb Hines: here is what it looks like now. Im following the tutorial by Kenny here http://www.reaper.fm/videos.php#ztr7B-PrUHY and if you go to the 33 second mark, the MIDI is detected there. The one problem solved so far is that at least reaper is detecting the piano. I got rid of the screenshot. This site needs 10 reputation points for me to post 2 links.

Still trying to get it to record. I tried recording, but Reaper used the built in mic on my computer instead. Ok it's recording now but I cant hear it when I play the recording back. Here is what I have right now: 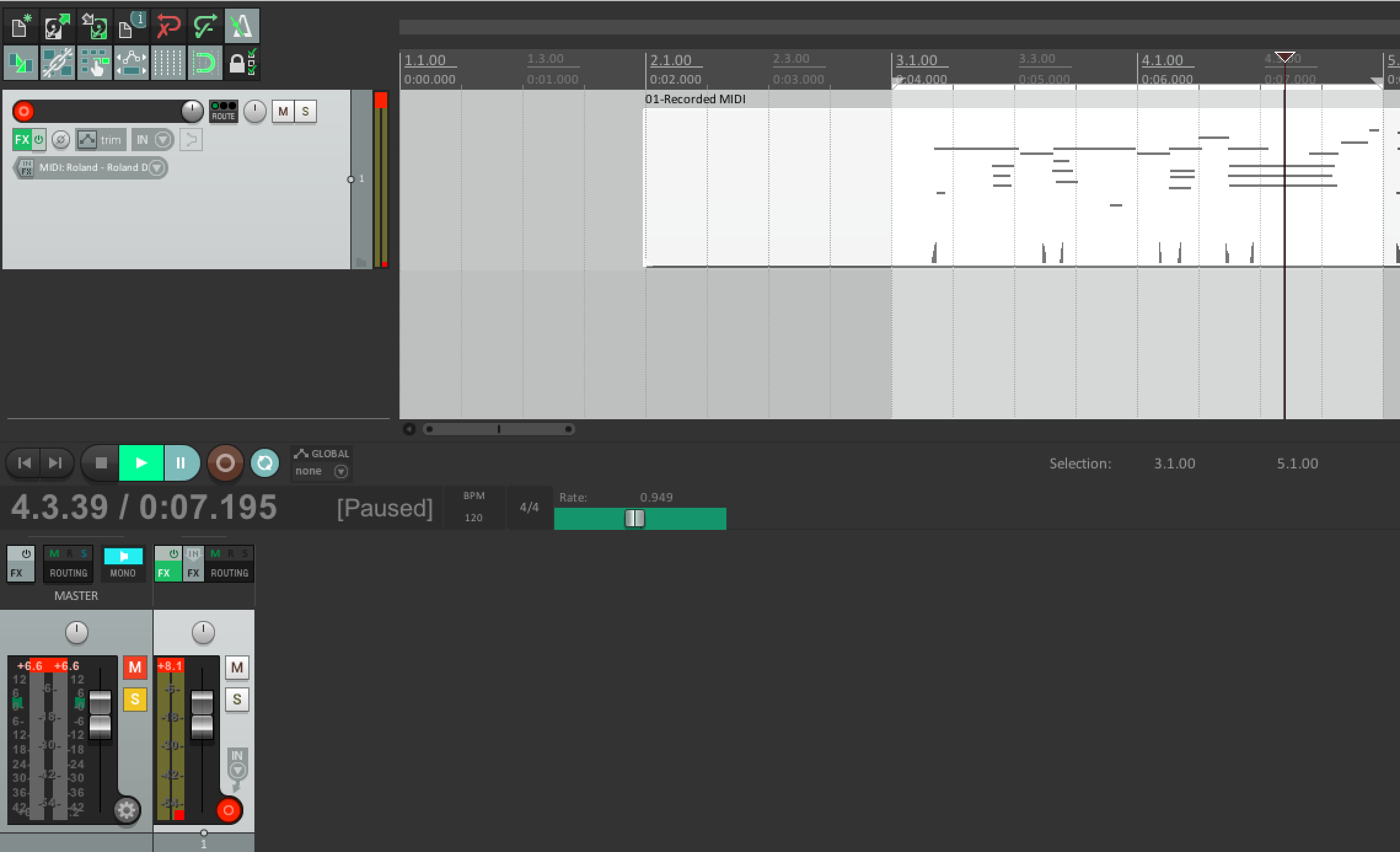 Edit 2: @Caleb Hines:Ok so I did have a VSTi connected to the track but I did not have an output so that works now. Thank you! But the solution you mention at Reaper playing at a slower and weird pitch being fixed with adjusting the rate:

You mention that when you record with a microphone, the playback is slower and at a strange pitch. I'm guessing that's caused by the "Rate" slider. It's the green bar in the center of the screenshot (to the right of the word "[Paused]"). In your screenshot, it says "Rate: 0.949" which may be causing your recording to play back slowly.

As for the MIDI playback causing no sound, you'll need to check at least two things. I haven't watched the video you linked, so I don't know if it already mentions these or not.

3
How to get rid of latency experienced while using VST in Reaper?
1
Easy way to beat latency with MIDI recordings
1
Digital Pianos and MIDI usability
1
Recording MIDI files with a digital piano on Android
3
Properly set up MIDI to USB
2
Have MIDI file. Want Audio. Don’t know how
4
How to arm specific Reaper tracks using Behringer MIDI footswitch (FCB 1010)?
1
Switch General MIDI instruments from device? (Roland Sound Canvas, Reaper)
1
Yamaha P45 MIDI Capabilities / What are the requirements for controlling this keyboard with my computer?