I cannot figure out how I should play the left-hand arpeggio in beats 3-4 of this bar:

So the LH "top notes" C and G should definitely be played with your thumb. The easiest way to play the rest is not to worry about trying to play the notes perfectly "legato" with your fingers. Press the sustain pedal as you play the first note of each chord (the low Ab and Eb). It's up to you whether you release the pedal as soon as it's no longer needed, keep it down for the whole of each half-bar, or something in between those extremes.

If your hands are very small, you might want to play 5-5-3 1-3-5 5-5-3 1-3-5, moving your hand and arm to play the consecutive notes with 5. That is a better way than trying to twist your hand about to play the notes legato with your fingers.

In general, you should avoid passing the fingers and thumbs over one another in broken chord passages when possible, since (as alephzero also mentions) it's more awkward than stretching or even jumping a bit to make notes.

In a widely-spaced figure such as the one in the left hand, don't try too hard to connect all the notes. As you have found, you can't without a lot of awkward reaching around, and that gets in the way of playing at any kind of fast tempo. So, I simply finger them 532123 532123, and suggest that you try it as well. You'll have to get proficient at jumping an octave between 3 and 5 as part of your technical repertoire anyway, so you might as well get started. (If your hands are too small to reach a 4th with 23, then jump a little there as well.)

It's easy to get caught up in trying to work out fingerings that allow you to connect all the notes without using the pedal. While this is a good idea up to a point, it can be taken too far, and obviously limits the things that you can play to things that you can reach in this manner. (During my student years, I worked out some pretty tortuous fingerings to some of Bach's fugues with this ideal in mind, with decidedly mixed results.) Also, as tempos get faster, legato becomes less of a goal. 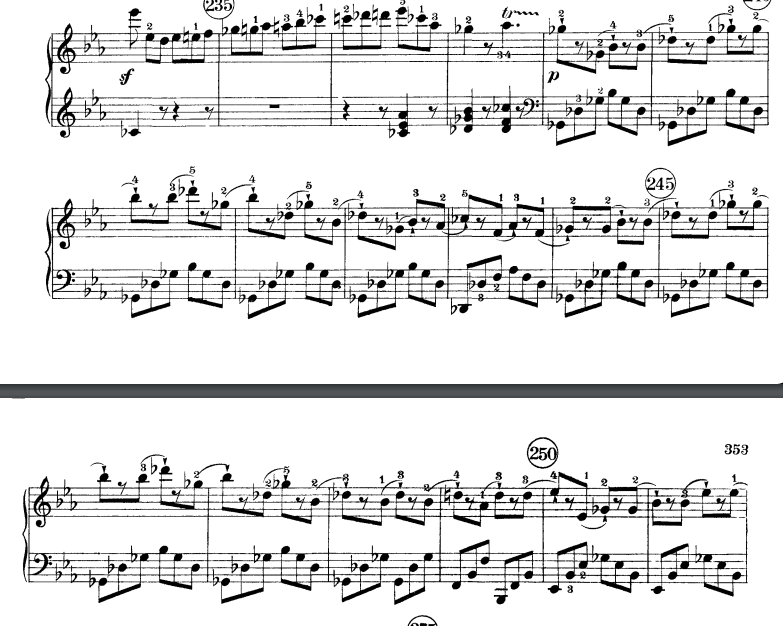 So, you'll want to learn how to do this. Your example piece is a good one to get started developing a good legato broken chord technique, connecting notes through proper use of the pedal.