Should I get a 12 hole or 16 hole chromatic harmonica?

There seem to be many types of chromatic available (12 hole, 16 hole, 10 hole, 22 hole, 22 hole) but from my previous searches I found that some of them, for example the 22 hole one, does not give different notes for blow and draw

Is there a standard one used by beginners, or does it not matter whether I start practice from a 12 hole or 16 hole one?

I am also having trouble understanding the layout of the notes in a chromatic harmonica. In the tutorial given here, the coloured figure gave me the idea that hole 1 gives a C in blow and D in draw with the slider out, but later on it has this explanation:

When you BLOW you get a C.

When you DRAW you get a C# (also goes by the name Db, same tone, different name)

When you BLOW WITH THE SLIDE IN YOU GET A C#

When you DRAW WITH THE SLIDE IN YOU GET A D

Could someone please explain this to me in simple terms?

I found something similar for a 12 hole chromatic 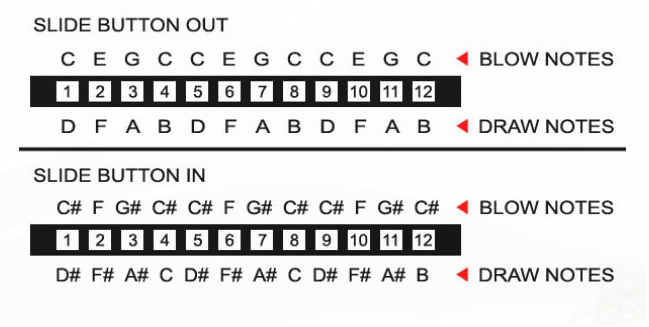 The figure shows C as the note for both the holes 4 and 5. Is the same note located in adjacent holes in a chromatic?

The notes shown in your diagram are not accurately named, as F (button in) is actually called E#, and C (button in) is actually called B#. Or vice versa, however you read it! So, yes, actually there will be two different ways in which to play these particular notes, button in or out, but generally, you'll play the ones where most of the notes are button out with the button out, so there is no need to get confused.

Other question - it's up to you, but you may as well get the larger range one sooner rather than later, as when you get used to playing chromatic, you'll wish you had a bigger one anyway. Basically, though, the chromatic is not used so you can play in C#, but to give you the odd notes you find you need in C, F and G, mainly, where you'll need a Bb (A#!) in F, and F# in key G, for example. Later, all the other keys will be playable, as you have every note you need.

EXTRA EDIT: That explanation in the pink box is plain wrong! I looked at the site, and it's quite naiive, musically. There are technical errors in note naming all over it, and the explanation (wrong) contradicts other information given previously. Just wish 'experts' were really that...

I have a 10, which is 2 holes short of a octave. It's missing the upper G-C. Sometimes I miss that, but the bigger issue is build quality.

I'd recommend the best quality 12 hole that you can afford. Better pay for quality than range.

The layout packs the chromatic octave into 4 holes, C-C# in a repeatable pattern. That means there are 2 F reeds per octave, and 2 C. (And 3 C for the middle octaves). It gives priority to a regular layout, as opposed maximizing the range.

There are many hole and tuning variants out there, but you could say that a C-tuned 12 hole chromatic harmonica is the most "standard". That is what many professionals stick by. It's the equivalent of a 4-string bass guitar, or a 88-key piano. It's a good starting point. If you're serious about this instrument, then you'll likely end up owning more than one anyway.

8 or 10 holes are closer to the toy-category, and 14 or 16 holes, albeit useful, are harder to build. If built with similar tolerances and quality, a 16 holer will be more leaky to play than a 12 holer. I suggest you go for a 12 holer, or, if you really insist on range, a 14-holer.

About your confusion on the notes... yes there are 2 adjacent identical C's (and some more notes where you have multiple options), just like a guitar lets you play the same note on adjacent strings, or notes on the piano can be played with different fingers. Each instrument has its artefacts, and having multiple options will eventually help you play lines faster and more fluently.

Not the answer you're looking for? Browse other questions tagged harmonica chromatic or ask your own question.