I'm curious about the "cresc." sign . which one is getting louder , no.1 or no.2? and when does this cresc. end ? Does it end until the next sign come out ? 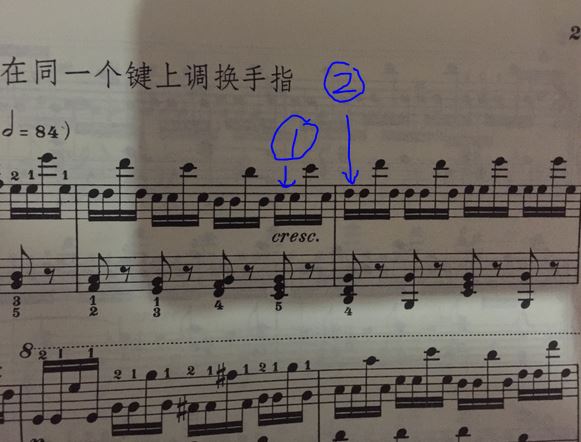 The crescendo starts where the word "cresc." is. It SHOULD lead to an explicit dynamic, and unless very short should be extended with a dotted line to indicate the extent. The composer here is being rather imprecise in indicating what he wants.

A crescendo applies until contradiction, either up to a decrescendo (then it remains unclear, which level to achieve) or to an absolute volume indication. If I see correctly, in the bar below yours marked with (1) the seems to be a piano marking directly beneath the octave transposition. Assuming, that (due to the metronome marking in the upper left) there is only one bar before and (due to the page number in the upper right) there is no bar behind, this would result in a 3 bar-crescendo, surely a reasonable amount.

Cresc., or crescendo, means getting gradually louder than it has been. It starts where your 2 is. It'll continue getting louder until there's another sign, maybe an f or ff, at which point, the volume will level out until another sign is shown.

It's shown in the bar marked 1, in anticipation for the start of the next bar, although with a gradual cresc. it could start at 1, as the difference in volume won't make much difference.

The player needs to decide how many bars the cresc. is taking, and make the increase in volume steady from 'cresc.' to the next instruction. If it's a couple of bars, then it'll be a quick crescendo, but if it's a lot, it'll be a slow one.

EDIT: the question is very academic as it stands. If the cresc. is short, a player may well start it at 1, but if it's a few bars long, it's not going to make very much difference at all. I doubt in that case, the listener would discern the start of the cresc.

Thanks to the comment by alephzero, we can figure the whole thing out easily.

A crescendo ends where a non-contradictory dynamic or explicit instruction appears, unless it appears in parenthesis. The latter is used for long crescendos to serve as "way points".

I marked in red the crescendo duration in your case. It is being reinforced later by a < crescendo notation.

Here are the final measures from Britten's Simple Symphony, 4th movement, viola part. You start at p and immediately start a sempre cresc. up to ff (again, a < notation reinforces it 2 measures before it ends). In orange I marked where the intermediate dynamics apply to. The cresc. after the (f) is meaningless and could be removed/ignored (this edition has several mistakes anyway).

Final note: you should be able to read from the music how the dynamic instructions should be played. In general, conventions change over time and notators/editors can make mistakes. Trust your musical sense.

Not the answer you're looking for? Browse other questions tagged theory piano sheet-music classical-music or ask your own question.

10
Chord progressions ending in "I" at the end of a phrase vs. the beginning of the next
6
Are these "power chords" in a classical composition?
6
What is the correct notation for a repeat section with 2 different beginnings?
5
What does this wavy line mean in piano?
9
How to write a score that begins with a pickup note and repeats
4
How should I notate an intermediate dynamic between mp and mf?
32
How did composers "test" their music?
1
Repetition sign at the end of a sequence using endings
2
Piano CPE Bach - Solfegietto - cross-hand playing style?