Why is it called the chromatic scale?

The definition of chromatic as given by Google:

I, being un-synesthetic, do not associate sound to color. Its certainly fun to imagine what sounds look like but I just don't associate a color to a sound.

It is impossible to say for sure, since the term chromatic has had a musical meaning since at least ancient Greek times (hence the use of a Greek word). More on that in a moment, but first, its worth noting that "color" has idiomatic meanings as well, such as these definitions for "colorful" in the Merriam-Webster Learner's Dictionary:

3. If you use colorful language you use words that are usually considered rude or offensive.

Either of these definitions could easily be applied to the case of chromatic notes in music. They add interest or excitement by using improper notes that are usually considered offensive (by virtue of being outside the scale).

As for the origins of the term... In Ancient Greek music theory, full scales were built by combining smaller tetrachords -- 4-note scales that spanned an interval of a perfect fourth. While the two outer notes had to be a fourth apart, the two inner notes could move around. Tetrachords were classified as belonging to a genus, depending on which of three distributions they had. The three genera were Diatonic, Chromatic, and Enharmonic. Note: the following explanations are only approximate, because the tuning system was considerably freer than what we have.

As you can see, the diatonic genus primarily used whole steps, with half steps only to fill in the gap, which the chromatic genus used primarily half-steps (with a rather large gap). This is different than the modern usage of the term, to be sure, but the similarity should be evident.

The modern usage of the term can be traced back to this ancient usage through the Renaissance, and its interest in reviving ancient Greek culture. This can be seen especially clearly in the works of Nicola Vicentino. In Rome, 1551, there was a major music theory debate between him and Vicente Lusitano. The later argued that music could be understood through the application of only the diatonic genus, while the former was attempting to revive the importance of the chromatic and enharmonic genera. Although Lusitano was judged to be the winner of the debate, this didn't keep Vicentino from advocating for chromatic and microtonal music. In fact, in 1555, he designed and built a 31-note-per-octave keyboard, known as an Archicembalo, and published a treatise and music to go with it: L'antica musica ridotta alla moderna prattica (ancient music adapted to modern practice).

Similar instruments were built during this period, including one from 1606 which still survives and is actually called 'Clavemusicum Omnitonum Modulis Diatonicis Cromaticis et Enearmonicis' (roughly, something like "Keyboard to play all notes diatonic, chromatic, and enharmonic").

I found a translation of Vicentino's work on Google Books, and when introducing the three genera (which he calls "divisions" of the fourth) he has this to say about chromatic (emphasis mine):

Now "transformed" may seem an unusual translation for chromatic, but this is described in more detail later. Vicentino refers to the famous medieval theorist Boethius who wrote about Greek music theory in his 6th century work, De Institutione Musica (The Principles of Music).

Boethius says that chromatic means nothing more than the changing or the transforming of the diatonic sequence... transformed from one system to another. In calling this genus "colored" he did not mean to speak of color in similitudes rather than in literal terms, as some people believe. For just as mixed colors present diverse effects to the eyes, so transformed musical steps mixed in ascent and descent provide the ear with a variety of sounds.

Around the same time, Orlandus Lassus was experimenting with wildly chromatic harmonies in his set of motets, Prophetiae Sibyllarum, whose introductory movement, a sort of Prologue named Carmina chromatico, opens with the following exotic chord progression: C G B C♯m E.

Thus this use of the Greek term "chromatic" had become common place in the Early Baroque, where it was used to describe works like Girolamo Frescobaldi's Toccata Cromatica and Recercar cromatico post il Credo, or Tarquinio Merula's Capriccio Cromatico, his Sonata Chromatica, and his Toccata & Genus Cromaticum (the especially chromatic bit begins at 2:41). It would have been old-hat nearly a century later, when Bach wrote his famous Chromatische Fantasie und Fugue.

Side Note: It's also worth noting that a decade before Vicentino re-appropriated the tetrachord-based use of the term "chromatic", it had acquired an alternative meaning. The Italian term note nere ("black note") was used to describe an ornamented style of madrigals that were written with shorter-than-usual durations (i.e. the "black" noteheads of quarter- and eighth-notes, as opposed to the usual unfilled noteheads of whole- and half-notes). Sometimes, such madrigals could also called "chromatic". It's not clear if this term was meant in a literal sense (e.g. colored notes), or a figurative one (the elaborate musical style being flamboyant and "colorful"), but the term had no connection to the Greek chromatic genus, as was noted by theorists at the time. However, this alternate association of embellished musical lines being "colorful" can still be seen in the term coloratura.

The chroma in chromatic does mean color. In chromatic scale, we have full access to all the notes available in the twelve tone equal temperament system.

We don't typically use all 12 notes when composing or playing and we'll mostly stick with a smaller set of typically seven notes from a heptatonic (seven note) scale. We'll also most likely be in some kind of key that defines the expected harmony and tonic. When we use notes outside the typical scale or key that don't necessarily add function to the melody or harmony they are though to add "color" to the piece hence why we describe these tones as chromatic and name the scale that collects all the pitches we have access to as chromatic.

That is an interesting question. And Dom's answer gives the simple explanation that most plausibly explains how the term "chromatic" which originally referred to color and not sound or pitch (from the Greek word chrôma, meaning color) was adopted to describe the full set of 12 musical pitches in Western Music. I would like to add to Dom's answer and further explore the relationship between colors and musical pitches.

Much of what we perceive in our brain (if not all) originates in the form of some type of frequency that the built in computer inside our skull translates into color or sound among other things. We know that brain waves can be measured in terms of frequency and new research is applying this concept to allow people who have been paralyzed to control mechanical devices mentally by harnessing varying brain wave frequencies created by thinking about a certain thing - and assigning the different frequencies to different actions of the mechanical device (sort of a computer generated mind over matter).

Both sound and light travel in "waves" (hence wavelength) - but the light waves are so short it is easier to express their frequency in terms of length of the waves or wavelength.

But we speak of "sound waves" and "light waves". The frequency of these waves is what our internal computer is able to process into what we translate or perceive as a certain pitch or certain color. Color is nothing more than the "frequency" (measured in wavelength) of the light that is reflected off of a given surface.

There has been a great deal of research correlating sound with color and the chart below provides one example of how to visually demonstrate a correlation between a given wavelength of light and a corresponding frequency of sound. 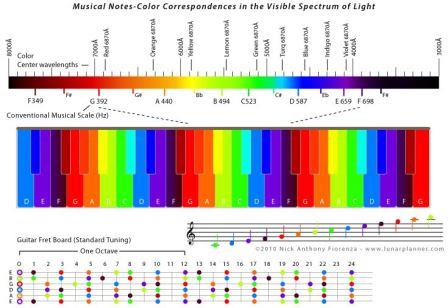 We perceive sound when the frequency of the sound waves creates a corresponding vibration in the mechanisms of our inner ear which sends this message to our brain. We perceive light when the receptors on the retina in our eyes calculates the "frequency" of the light waves (wavelength) and sends the message to our brain. Both sound and color (which again is the wavelength of reflected light) are processed by determining the relative "frequency" (how fast or slow) the light waves or sound waves excite the respective receptors in either our ear or eye - and send this information to be processed by our brain.

This might explain why some people who have synesthesia are actually able to see the color of sound. And it further supports the logic of using a term associated with color, "chromatic", to describe the full spectrum of available pitch classes in a 12 tone musical scale - (or any other full spectrum scale used in various cultures).

I hope this information provides further enlightenment and illumination into the relationship between sound and color.

Combined with the information in Caleb Hines' answer, a good explanation is that the ancient Greeks considered tones outside of the diatonic scales/modes to be used for embellishment.

The octave is a rainbow that repeats.

Just as the rainbow has a pattern, if you choose any reference pitch and go up an octave or down an octave, this "pattern" repeats again and again.

Of course 400Hz does not sound exactly the same as 800Hz, but they have the same "color" (Like an Ab and the Ab higher one octave) and thus something that shows this recurring pattern-per-octave can be thought of as chromatic.

Really, the chromatic scale is just an enumeration/play of all the "notes" in a scale, kind-of like how we can "enumerate" all the colors of the rainbow. Really there are many more than the basic ROYGBIV, and likewise there are far more sounds than can be accurately represented by a 12-semitone instrument. Considering it this way, the term chromatic takes on the notion of fuzzy-bucketing of sounds into label-able buttons.

The analogy of colour is actually really apt. Chromatic notes along with other nonchordal notes are indeed used to give melodies colour. Nonchordal notes or notes that do not belong to the scale often are used to make music interesting by bridging between chordal notes in a manner that makes musical sense.

Melodies, when made effectively, have a strong, conservative choosing of chords with an effective use of nonchordal notes (Including the use of chromatic notes.)

You can if you wish to use an analogy compare it to the work of an Architect. When the Architect is commissioned to build the house he first needs to comprehend the basics of house building.

The house at the very least needs to have a proper foundation. It needs a roof, some windows, and a ceiling.

When he is has done all the basics he can then concern himself with the finer points of the house so that it can appeal to the aesthetics of the homeowner.

Not the answer you're looking for? Browse other questions tagged scales terminology or ask your own question.

2
What is the melodic minor scale with a flattened 5 called?
1
Scale in opposite direction - What is it called?
11
Can a song be in the chromatic scale?
12
What is the historic origin of the terms & textbook definitions of the natural minor, harmonic minor, & melodic minor scales?
5
How to determine the names of the notes in any given scale
6
Pentatonic, hexatonic, heptatonic, octatonic… what is a 12 tone scale called?
19
Exactly what does “diatonic” mean?
0
Why is the octatonic scale described as a equal interval chromatic scale?
3
Why harmonize non-diatonic notes with major 3rds above, in a “minor key” context?