The problem is that I am only using this FX loop for floor pedals. (A Boss DD7 and a ISP Decimator G-String II)

Even with the noise gate, the hum seems to come through. What could cause this to happen? Is it typical for an amp to be noisy when the FX loop is set to -10db?

The effects seem to sound okay when it is set to +4db, but I'm wondering if this is typical or if I should bring my amp in to a technician and have it checked out.

It turns out that the issue was a ground loop between my FX loop and the front of the amp! I found out that it was actually only happening when I had my Noise Gate in the loop. The Decimator G String II takes an input from the front of the amp along with an input from the FX Loop which ends up connecting the two grounds. Apparently the two grounds were at slightly different voltages and it induced a ground loop and caused a humming sound.

I ended up getting an Ebtech Hum Eliminator and used it to lift the ground of the FX loop and the problem was solved! 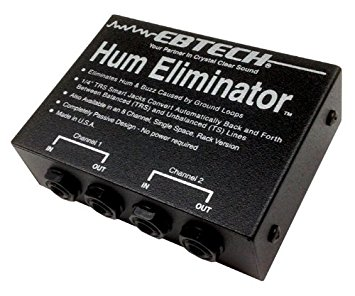 Really the issue is that the Decimator G String II should come with a ground lift switch... But unfortunately it doesn't.

Also on top of the hum there was a slight hiss on the -10db setting even without the noise gate. I ended up taking the amp to a tech and he explained that it has one potentiometer to adjust the bias, but it also has another to adjust noise and the "noise" adjustment wasn't quite set right. Tweaking the second potentiometer helped eliminate the last little bit of hissing.

The most common cause for effects loop noise is placing a pedal or electronic device to close to the amp head. Make sure your pedals or effects devices are at least two feet away from the amp head.

Not the answer you're looking for? Browse other questions tagged amplifiers guitar-effects effects-pedal or ask your own question.

2
Loop overdub bar
3
Do I need an effects loop in a bass amp?
3
What is a buffered effects loop in a guitar amp?
1
Amp modeling on multi fx pedal through an amp
3
Loop pedal volume in effects loop not controlled by amp volume controls
2
Modeling amp with FX Loop
3
Crate amp footswitch question
3
Overdrive pedal shuts down guitar signal when disengage