I'm attempting to figure out what is going on in terms of harmony with this song.

This is the best I have managed so far (supposing a tonal center of A): 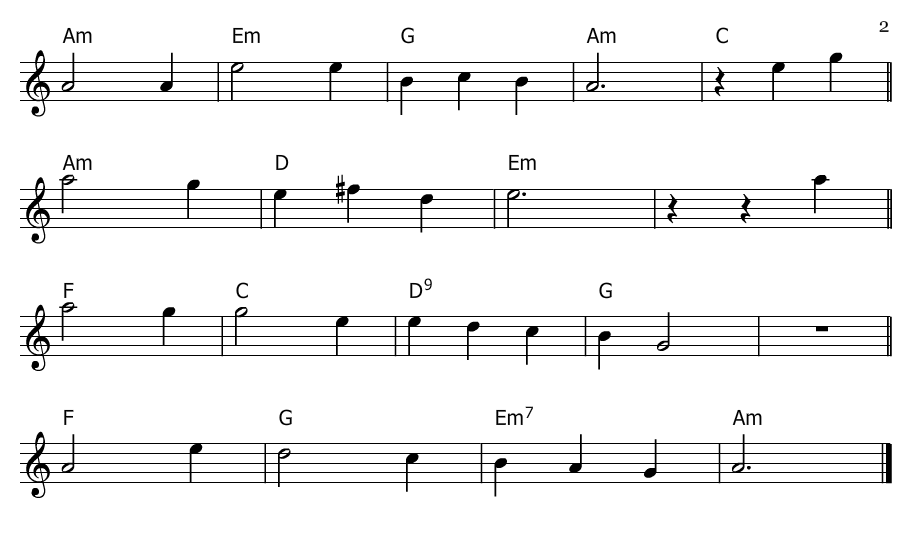 Which comes out functionally as:

I'm not sure I need to specify the leading flats, seeing as the root-notes lie in the minor (Aeolian) scale.

My attention is drawn to line 2 measure 2: a (major) IV chord!

I've been analyzing classical works functionally, I've got as far as Beethoven. And I've looked at some modern works as well like Scott Joplin, Queen, etc. But this entire sequence really throws me out. I have no context for i v bVII i.

It seems not to have evolved from the same base. As if it is a different kind of species that has evolved independently. This has not come from Bach, surely?

Can anyone help me get a feel for this very beautiful work.

And no, this doesn't come from Bach- its roots are probably older. Lots of old folksongs and ballads use similar modalities.

While you could say the piece is in A minor, it doesn't really use the tonal ideas brought from the common practice period. If it did, you would see E or E7 much more instead of Em. The piece builds more off the naturally constructed chords of the A minor scale which means it uses much more modal ideas and I wouldn't expect certain tonal ideas, like the deceptive cadence or modulation, to actually drive what's going on and the are other things going on. The melody is is direct control of the harmony.

There are things you could look for and study. In general inside or outside functional harmony, look at how the notes move and you'll see patterns. For example moving up a third such as Em to G and Am to C are common ideas in this and can be looked at not as functionally, but decoratively. Functionally not much is changing If we were to combine those two chords for each we would end up with Em7 and Am7 respectively so in part when these chords are used with each other they can more or less be viewed as one unit moving for effect due to their similarities.

For the D chord it's just a borrowed chord from a parallel mode most likely from A Dorian, but it can also be viewed as from A Major (or Ionian if you're thinking modal). It's no different from iv and in major keys you'll sometimes see the opposite where iv is used instead of IV. In this piece, it's just use to give a little bit more resolution to when you go from the D to the Em as the F♯-> G resolution is stronger than an F->G resolution. It also sets up the next part quite nicely.

The next part even if you try to view it functionally does not modulate. Different chords are used to color the melody which is different then before in a much way that has been done before, but it does not stay and you quickly return back to where you feel A is the most important note again and arguably you never left.

So in short this piece is not from functional harmony, but modal instead so you need to look at it much differently to understand it. Roman Numeral analysis will not get you far, but you can look for how the harmony moves and look at the melody to get a good perspective of why the harmony is the way it is along with melodic and harmonic patterns (motifs) that may define the piece much more than a functional analysis can.

Just to add the given answers. The reason why you would think this is Aeolian and not just plain minor has all to do with that minor dominant chord. In minor keys, you have a raised Leading Tone. This has the effect of bringing a third of a chord built on the fifth note of the scale up a semitone. This also gives you a Major chord.

In the Aeolian mode, you basically have the notes of C major starting on A note. It has all the notes of A minor except for seventh that is not raised (in minor seventh). So that A minor chord going to E minor (Dominant) definitely does not fit in a minor key.

Also, this song is actually more of a Medieval song (Although there have been modern versions.) So it being in a church mode makes a lot of sense.

P.S. In common, the matter is to provide the good support of melody and possibly with transparent methods directed on creation desired properties of music. As illustration I present sound file of the discussing work which is obtained by new structure of the music note which needn't in chords: http://home.arcor.de/yuri.vilenkin/fair-5ma-0.mp3 That is one from unimaginable number of possible variants. Greetings Yuri Vilenkin

Not the answer you're looking for? Browse other questions tagged theory analysis folk medieval or ask your own question.

6
Harmonic analysis of "Walk this Way" by Aerosmith
2
What is the correct Roman numeral notation for use in modal pieces?