Can't find the mixer in the new version of TuxGuitar (v1.3.2)

(The mixer lets you control the volume of each track.)

How can I get to the mixer in the new version of TuxGuitar?!?

I feel like I have to be missing something silly... they wouldn't just remove such an important feature.... would they?

I found this on the SourceForge forums. Click on the guitar icon on the toolbar and choose "Show Instruments": 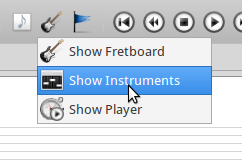 I couldn't see the "V", but I found out 6 circles at the right of each instrument. Volume can be tuned with the first one.

Not the answer you're looking for? Browse other questions tagged guitar tablature mixer tuxguitar or ask your own question.

5
Can you change the volume of a specific track in TuxGuitar 1.3?

5
Guitar audio interface matching tone of my old amp, and a problem
7
Can I daisy chain two mixers together to create more input channels (a sub mixer)?
1
Is there a way to change the volume of sound or turn off sound completely in TuxGuitar?
5
Can you change the volume of a specific track in TuxGuitar 1.3?
0
Speaker impedance connected in parallel for the power mixer
2
Connecting a mixer and a USB audio interface
1
Can I connect aux sends back into the mixer inputs?
3
Why do I not get stereo output of my drums through the mixer?
3
Add a new guitar tuning to TuxGuitar
2
Does anyone here use TuxGuitar and is by chance able to tell me how to adjust the volume of tracks seperately?