Is doubling the root when converting guitar chords to piano wrong?

If you take guitar chords and put them into sheet music for piano, should you double the root (CEGC) or not (CEG)?

It is not necessary to double the root when converting guitar chords to piano chords but it could be done if fits better with the music. But there are important distinctions between the guitar and piano that come into play when considering how to notate chords on sheet music. These distinctions center around (and are affected by) the way chords are played on the two instruments. Allow me to explain further.

A basic major or minor chord consists of three notes. On piano these three notes are often played in root position and depending on if they are played with left hand or right hand, they could be noted on the bass or treble staff.

Of course it is not uncommon for a composer to choose to notate an inversion of any given chord (or add a parallel octave) on piano music - depending on the musical effect and what is going on between left and right hand and how the harmony is working in conjunction with the melody.

The guitar is laid out entirely differently than a piano and therefore the practicality of playing various chord voicings is a limiting factor in terms of what can physically be played on guitar. Instead of 88 keys a guitar has 6 strings. And instead of each string (or set of strings) being a different length (as on piano) - on guitar each string is the same length.

On guitar it is easier to play a chord by strumming all six strings rather than attempting to isolate three string while missing the other three - especially since each string is less than 1/4 inch apart. So it is very common on guitar to include a parallel octave or sometimes three octaves. And this happenstance has more to do with the logistics of playing the instrument than anything else.

Because of the logistics of instrument design and tuning, guitar chords are usually voiced an octave lower than what is shown on the musical staff. If you play basic guitar chords in their most common open or 1st position (using some open strings and played near the headstock where the fret spacing is more generous), the pitch class of the notes would correspond to one octave lower than what is written in standard notation for piano. The reason for this is that if you tried to note the corresponding pitches in the corresponding octave for the way a basic open guitar chord is played the same way you would notate those same notes on piano, many of the notes would end up between the Bass and Treble staff.

For example a common way to play a G major chord on guitar is: 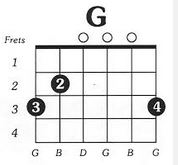 To play this chord you would strum all six strings and the notes played would be G B D G B G, low to high starting from the G an octave and a half below middle C. Note that in this chord the root (G) is played 3 times in 3 different octaves.

Written on standard music notation it would look like this:

It would be highly unorthodox to write a chord this way to be played on piano. In most sheet music for guitar the chords are noted with 6 line tablature, or just the chord name or the chord chart above the music staves. Or sometimes the guitar chord may be abbreviated on the treble staff but the guitarist would normally play the basic open chord which would sound an octave lower than what was written.

For these reasons - it is not common to attempt a literal direct translation between the exact pitch class notes played on guitar to piano. The best approach is to choose a voicing for piano based on what fits with the rest of what is going on musically and what best serves the harmonic purpose and what sounds best in the context.

In other words, do what works for each respective instrument within the musical context of the piece. What works best on guitar will usually not be what works best for piano or keyboard.

If you take guitar chords and put them into sheet music for piano, should you double the root ?

There isn't any definite answer here. You certainly have to option to easily double the root (C). So, if you want to, go for it. If you don't want to, don't. Really depends on the context. It might fit to have two C's, it might not. Try them both out and see for yourself what you like better.

Just for the record, in simple chords like C major (CEG), you can easily double the root on the guitar as well.

do parallel octaves even matter when it comes to things like this?

No, they don't. These kind of stuff usually apply to chorale singing back in the day, and even back then, these didn't really apply to orchestras etc.

So, if you play piano you can play parallel octaves and you won't have any problems; it won't be wrong.

A pianist is very unlikely to want a literal transcription of what a guitarist does. Anyway, guitarists don't spend all their time strumming 6-string chords!

Parallels matter in 4-voice harmony. They matter a lot less in pianistic styles. Just be aware of the strength of the third in a major triad, particularly when it's being the leading note of the next chord. Double that, it may stick out too much.

What do you mean by "wrong"?

When transcribing music for the piano, the goal is to be faithful to the original while ensuring that the transcription is playable and "pianistic", which is a term-of-art that is not very easily definable.

It sounds like you're asking about the rules of traditional Bach-style four-part-harmony. (Or really n-part harmony, where 1 < n < 7, but "four" is the traditional number, so I'll use that throughout.) But it's not "wrong" to write music that breaks these rules--the rules themselves aren't any sort of all-encompassing "Laws of Music", or even really "rules"; they are simply reverse-engineered principles that reflect the implicit voice-leading conventions generally used in Baroque-era (and, to some extent, Classical-era and pre-Baroque) music. These rules are "broken" even in some Baroque music; in other styles and eras, particularly the early Modern era, traditional four-part harmony is often so far from the composer's intentions that it's absurd to look for "violations" of the rules, since the rules simply don't apply. For instance, the 12-tone music of Schoenberg followed a completely different set of "rules" that had very little if anything to do with traditional voice-leading.

So the fundamental question when writing a transcription is, what style is the original music in? In your case, it's somewhat unlikely that the solo guitar piece is a work of Baroque four-part harmony. So it's unclear that you should try to make your transcription follow those rules.

If the guitar piece is written in the Baroque style, then you may be able to avoid voice-leading "errors" by transcribing the notes exactly in their original registers. This may not produce a very "pianistic" result, however (as noted in other answers).

It's possible that the guitar piece stylistically emulates Baroque four-part harmony without actually following the rules to the letter. This can happen due to the limitations of the instrument itself (certain voicings may be uncomfortable or impossible on a guitar). In this case, it may be a good idea to "fix" the music as you're transcribing it.

Here's what must be preserved from the original, if it's in four-part harmony:

Do you really understand the four-part harmony rules?

Of course, you may wish to write a piece yourself in the Baroque style, or you may wish to make a "Baroque-ified" version of a guitar piece, perhaps as part of a cutesy series of variations on a theme. In this case, you'll want to follow the rules as closely as you can, of course.

However, it's not clear from your question that you really understand the rules. What does "doubling the root" have to do with "parallel octaves"?

Let's take a step back. What do we mean by "parallel"? If we simply mean playing octaves as sequential chords on the piano, then that is not merely permissible (in nearly any style) but quite common. The four-part-harmony meaning of "parallel," however, has to do with parallel voices. In fact, all the rules of four-part-harmony are concerned with maintaining the independence of separate voices. The reason parallel fifths and octaves are discouraged is because it makes two voices momentarily blend into one voice, making it harder for the ear to distinguish them. (If you don't know what "voices" are, then you really need to spend more time studying Baroque music and theory before trying to write four-part harmony, but the short version is that they're the independent melodic lines collectively forming both the harmonic and the polyphonic structure of the piece.)

So on a keyboard instrument, "parallel" octaves can either meaning playing a single voice as an octave for emphasis (i.e., the octaves really "belong" to only one "voice", conceptually), or inadvertently merging two separate voices into one single voice by writing them in parallel an octave apart for two or more notes in a row. The first case is of course fine, because there is no loss of independence between voices. The second case is where the "problem" arises (which of course is only a problem when attempting to emulate the Baroque style).

Similarly, when you speak of "doubling" the root, playing the bass voice as an octave does not count as "doubling the root." In order to double the root, you must have two separate voices land on the same note (typically in different registers).

Now, as noted in another answer, parallel octaves only arise in sequential chords; that is, an octave on its own is never considered "parallel." This is because the independence of the separate voices is maintained by their independent motion. Two voices can easily move through the same note (in different octaves) without moving in parallel. Note that if this were not the case, four-part harmony would be impossible: triads only have three notes, so most chords require something to be doubled!

How to break the rules by doubling the root

So here are the necessary and sufficient conditions for you to be "breaking the rules" by "doubling the root", as per your question:

Not the answer you're looking for? Browse other questions tagged guitar theory piano chords octave or ask your own question.

17
How to memorize seventh chords and inversions on piano?
3
How can this simple bass line be categorized in chords or scales?
1
Essential things to memorize in music theory
2
Homophonic Voice Leading (Hymns)
0
How to put chords (POP-EDM) under a given lead vocal melody (starting from a good knowledge in music theory)
10
Playing complex chords on a 6-string guitar
2
Strategies for learning all 60 seventh chords in root position (5 qualities in 12 keys)
2
How should I learn piano being a long-time guitarist?
2
Workarounds for 10th intervals or larger when arranging for piano
1
While playing a song / melody, Why does my timing of hitting the chords go wrong?