How to set a simple song in lilypond with refrain

I am fiddling now a whole day around with trying to set a correct Lilypond notation. While I found with trial and error, that I could display all tones and vocals, I am not able in getting the correct timings (and tones), so I have a few questions.

Here I show what I have found out until now:

Addendum: with the help of Alephzero, I managed now to display a better notation:

Two questions remain: 1) How to place the chords not only at the boundary of the bars 2) How to write the first lyric only once and, because it is the same, not 4 times I attached the new progress (It is not fully correct since it is only an example) 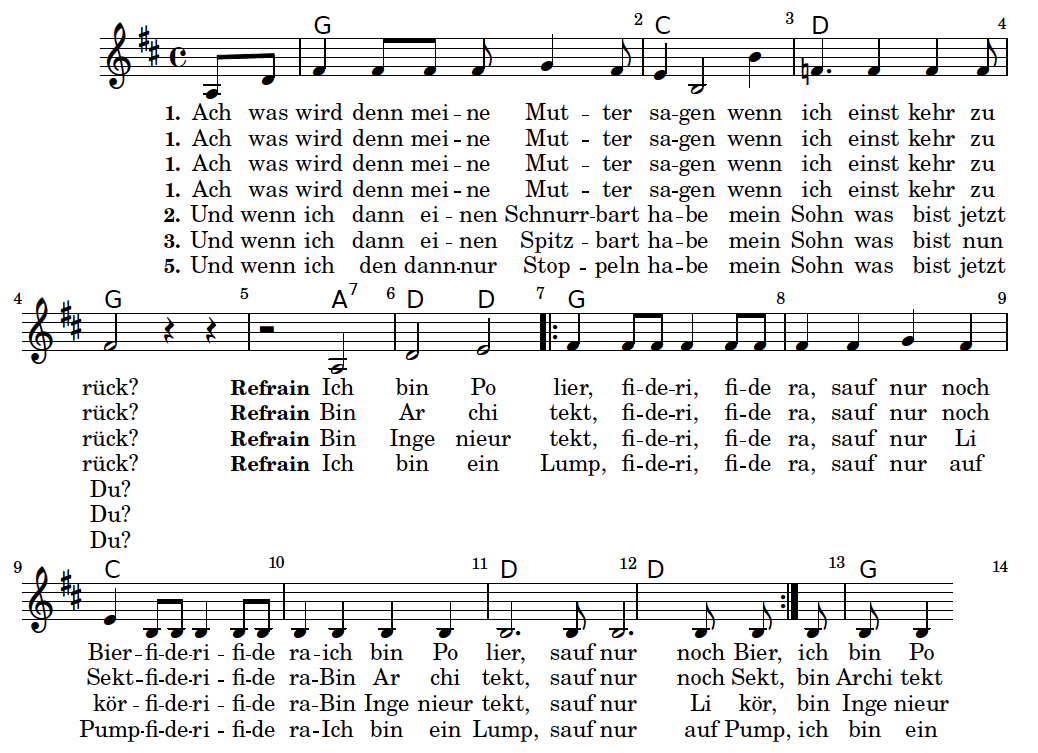 I think there is a fundamental problem with the way you tried to do this. You defined \context Voice = "voiceMelody" inside the first << ... >> but then tried to reference voiceMelody inside the second << ... >>.

In Lilypond version 18 this seems to crash the program, which is (by definition) a bug, because it should be impossible to cause a crash by supplying the wrong input. But even if it didn't crash, I don't think it wouldn't have done what you wanted.

The easiest way is to create one score that contains both the verse and the chorus, something like this:

There are several mistakes in the rhythms, but you should be able to fix those. If you write a | character at the end of every bar, Lilypond will give an error message if the length of the notes in the bar don't add up to the correct amount. The reason you got "weird timings" is because Lilypond doesn't care if you write a long note that would continue past the bar line into the next bar - in early music notation (15th and 16th century) music was intentionally written like that, instead of the modern notation using tied notes.

Note, also I changed your attempt at writing a repeat into the standard way to do that, using \repeat volta.

18
How can I force LilyPond to repeat a chord symbol (relates to alternate endings)?
7
How can I transfer the old \partcombine syntax of lilypond to a version newer than 2.1.17?
6
Rendering second ending closing bar when followed by another repeat in Lilypond
5
LilyPond vertical spacing, alternate endings, and chords
11
Top-aligning scores inside Lilypond \markup blocks
4
How do I get the bar lines in successive staves to align?
4
Get segno to appear above chord-names in lilypond
4
lilypond engraving lyrics to small part with voices
8
Creating conga part in lilypond
3
(Dis)aligning lyrics to a melody with LilyPond