Do such chords exist?

motivation: I am trying to get all of the permutations for all possible notes, chromatically (within the octave of a selected tonic, in this case C-chromatic scale)

or am I doing this chord theory all wrong?

theory chord-theory
Share
Improve this question
asked May 20 '16 at 0:29

Yes they are both chords, but how useful they would be alone especially in functional harmony is questionable. The first one C, D, E could actually be viewed as a CAdd9 chord without the fifth as the root implies a perfect 5th pretty strongly. The second one will most likely not be used in any tonal harmony due it's extreme dissonance and will not be given a traditional symbol.

Any distinct set of pitches is considered a chord even if they don't come up that often. Typically when talking about chords in this theoretical setting trying to create all possibility, we'll look more at the chords as a pitch class sets and distinguish chord types based on their prime form.

In pitch class set, all notes are enumerated from 0 to 11 for that repeat each octave. By doing this you can look form similar relationships between sets. The 0 can be any starting note that makes sense, but to keep with the traditional ideas C is typically 0. For example, in a pitch class set a C major chord would be represented as [0, 4, 7] and any major chord in any inversion would reduce to this as its prime form which is just smallest way to represented the chord in an enumerated fashion like this. This can be extended to any system with a set number of pitches including the 24 equal temperament if desired, just the numbering change.

This site gives a good list of possible pitch class sets and what they would be in traditional music and as you'll see a good chunk of them do not come up in a traditional fashion.

A useful "theory" needs to tell you what you can do with a "chord", not just give it a name. For example the idea of "the chord EFGA" doesn't have much significance, until you put it into a musical context like this 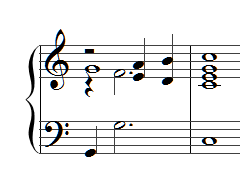 when you can understand it either as a dominant 13th, or as two passing notes associated with a dominant 7th - whichever you prefer.

As with most aspects of music, music theory doesn't offer one single 'correct' way to think of chords. The most commonly-taught way is to start with the triads that are generated from the set of notes in major and minor keys, and then consider other forms as variations on, or substitutions for, those chords. As others have mentioned, there's also an emphasis on looking at how chords function within the context of a progression. These two ideas are deeply ingrained in Western musical tradition, but of course you don't have to think this way - there's no reason you have to think of triads as the basic building block, or think of chords as 'altered' forms of other chords for example. You also don't have to think of chords in terms of their function - many pieces (even by canonical Western composers) arguably use chords primarily for their particular colour and feel ahead of any considerations of function.

You might wish to study some of the theories of consonance, dissonance, and roughness, which might help you if you decide to study harmonies that are generated from the full range of continuous pitches, rather than just the chromatic scale. (I mention this because you said you are interested in 'all permutations' - but you could also 'go bigger' than that idea!). This might also be relevant if you want to study how different chords can sound very different when played with instruments of different timbres.

If restricting yourself to a discrete scale, as Dom says, pitch class set notation is a way of viewing all possible sets of notes in a more egalitarian way. As Sova mentioned, as you stray further from diatonic norms, the 'letters' and 'sharps and flats' way of naming things arguably becomes less useful.

This can be done, but not all combinations are always useful. Nicolas Slonimsky's "Thesaurus of Scales and Melodic Patterns" basically does this. He lists lots of combinations indexed by number of notes.

Chord theory can be approached in two ways:

You can try and understand the frequency of each sound (in Hertz) and discover which frequencies are actually harmonious overlaps. This is approaching it from a pure tone / physics side of resonance.

You can also approach it in terms of "traditional" theory which is simpler, and closer to what you are getting into. There are twelve named tones in an octave and the number of "steps" between tones colors the sound you are hearing.

So get a keyboard/piano or even just a digital online one and count the number of white and black keys between named notes and you'll get much farther into chord theory by knowing how many "steps" there are between tones, than simply looking at letters on paper.

Any two or more notes form a chord. The other answers all have valid points, but the term itself is quite simple — even if it's not necessarily useful in most contexts.

Allen Forte, in The Structure of Atonal Music, lists 220 chords or "prime forms". These include all possible collections of chords of three to twelve notes, where transpositions and inversions are treated as instances of the same chord. Consequently, Forte's pc analysis doesn't distinguish between a major and minor triad, for example.

6
In a song in G major the sound F appears and sounds good. Is there a name for such a phenomenon?
0
Minor Chord Progression
5
What scale are the chords Em A C D in?
8
How are guitar chords built?
4
Chord construction using the minor scale
3
Slash chords nomenclature/reading convention
1
Understanding why these specific chords are played?
1
What is the chord progression and also the technique used in this rock riff?
5
Guidelines for writing a chord progression