Why do thicker guitar picks result in a darker tone color?

I recently had a vendor send me extra-heavy picks rather than heavy picks. I like the sound so I think I'll keep them but each note picked with the heavier picks definitely has a darker timbre (tone color) than with the lighter picks.

What are the physics behind this?

The interaction of a thinner pick is the same, except that the pick itself now flexes; this means that the string will release from the pick sooner: the pick is flexing more and less able to resist the back pressure of the string.

Though this glosses over some of the details string-pick interactions, we can look at when the string will start to slip in terms of the following diagram

Assume is already in contact with the string and displaced it a distance d from its resting position. Also assume that the pick, at the point of contact with the string is at an angle $\theta$ from the normal to the plane spanned by the vectors along the length of the string and along the picks direction of motion. In order for this point of the string to continue moving with the pick (I'm assuming that the picks speed is kept constant by the guitarist) the net forces need to be zero (no acceleration). Three forces are in play: the restoring force due to the tension in the string, the normal force, and the static friction between the pick and string. We only need to consider the vertical components of the force in the diagram above, which yields the equation: $\mu N \sin \theta - N \cos \theta =0; solving for the static coefficient of friction yields $\mu=\tan \theta$. Given that there is a maximum value for the static coefficient of friction (determined by the material composition and surface structure of the pick and string) above which the string will start to slip along the pick, there is also a critical angle of attack. Getting back to picks, for a thick (stiff) pick, the attack angle only changes from flection in the finger tips; for a thin (flexible) pick, the pick itself flexes, increasing the attack angle. Thus the thin (flexible) pick releases sooner (everything else held fixed) because it "bends to get out of the way", as in the following, exaggerated for effect, picture. 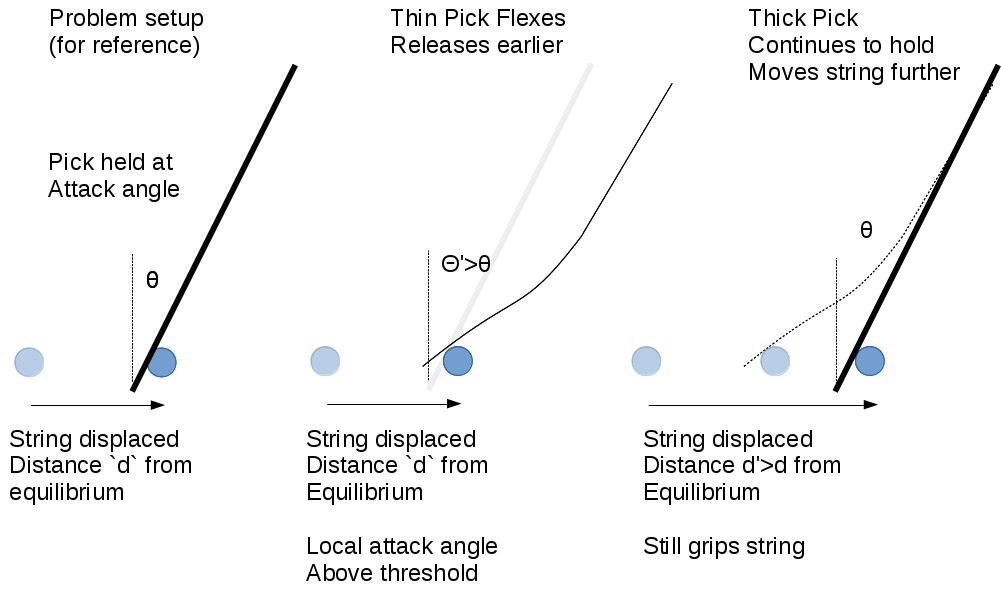 This is essentially a qualitative version of the model described in "Synthesis of Guitar By Digital Waveguides: Modeling The Plectrum in the Physical Interaction of the Player with the Instrument", F. Germain and G. Evangelista, 2009

The state of the string when it releases from the pick sets the initial conditions for the string's vibration. The model I have in mind involves

We can run through the numbers for an A string, fundamental frequency 110Hz, length 650mm (rounded for convenience). I assume that the pick is moving downward with the hand at a rate of 1m/s. The pick grabs the string, at a point 150mm from the bridge, and causes that point of the string to move downward at 1m/s. I've assume a "long" grip lasts 1/1000th of a second and short grip of half that. That is, in the "long" case the time interval from the point at which the pick first hits the string to the point at which the string is released to freely vibrate is 1/1000th of a second.

With these assumptions the maximum displacement of the string due to the pick is about 1mm -- this seems reasonable (at least of the correct order of magnitude). The linear shape of the tent used here is a bit of an idealization, in a real string there would be smoother curvature, but the fact that the portions of the string further away are unaffected is real -- due to the finite speed of propagation along the string. The details of the shape of the tent is less important than that it has finite extent.

The frequency content of this pair of initial conditions shows the expected result.

One defect of this analysis is that I've assumed that even though the string was deformed it was otherwise at rest. However, similar to the details of the deformation itself, the details of how fast the points on the string are moving is less important in this qualitative analysis than the fact that the region where the string is moving is bounded by the same (wave-speed-in-string)*(grip-time) distance.

The preceding analysis compares favorably to the results in Fundamentals of Musical Acoustics (A. Benade 1976) Chpt. 8 (which I didn't have handy at the time it was written). His summary is (paraphrased):

Chapter 7 of the same also discusses the difference between "displacing" the string and "hitting" the string; the latter excites more higher modes. The portion above neglected this component. One can model the excitations induced by pulling the string some transverse distance, at some point along its length, holding it, and then letting it go. Although the details of how much each mode is excited depend on where along the string you've pulled, the general trend is that the amplitudes are proportional to 1/n^2 where n is the order of the partial. The claim is that when a string is struck by something hard (and instantly bounces off) the general trend of the amplitudes of the overtones is that they decay like 1/n -- i.e. striking the string causes more excitation in higher frequency modes than displacing and releasing the string.

We can see how this relates to pick thickness. A thick pick manages to push the string more, so there is less energy in the higher overtones. A thin pick strikes the string, then (nearly) immediately gives way -- behaving more like an instantaneous strike. Of course any real pick stroke is some intermediate between the idealized extremes of "pure displacement" and "pure strike" types of excitations.

I am not claiming that "grip time" is the sole determinant of the distribution of excitation across modes for any kind of pick, only that when considering the differences between picks of different thicknesses, but otherwise the same in terms of shape and material, the "grip time" is an important consideration.

Thicker picks, in and of themselves, do not produce a darker sound. What happens is that thicker picks allow for a more rounded shape which releases a string smoothly, which has the effect of exciting fewer harmonics.

You can sharpen a thick pick, which will produce a brighter sound.

We can draw a diagram of the side profile (viewed flat) of the tip of pick like this:

We can draw an analogy here to pencils. A mechanical pencil with 0.5 lead cannot produce a line more dull than 0.5 mm. An artist's pencil with a thick lead can produce a much thicker line. It doesn't have to, though; it can be sharpened.

A thicker pick can have a similar profile to a thin one at the very tip. In the following image, the "U" at the very bottom is almost identical to that in the previous image: 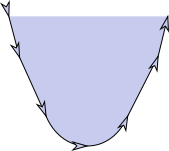 With this profile, we can get a similar tone to the thin pick (all else being equal: material and surface finish), but with far less flexibility.

But at that thickness, the pick can also be shaped like this: 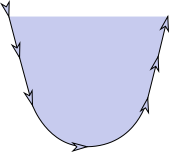 This low curvature allows the thick pick to produce an attack with low harmonic content, and this curvature is off limits to the thin pick. Thus you will not hear thin picks making that sort of attack, unless they are used on an angle to mimic the low curvature.

If we try a less curved profile on the thin pick, we will create sharp edges which will catch the string and re-introduce the high harmonics that we are trying to mute:

Actually sharpening a thick pick to a cusp will produce a bright edge in the tone with a sharp attack: 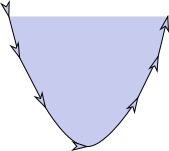 In addition to shape, texture is important. A rough texture excites the harmonics in a string, similarly to the way a violin bow does. A smooth pick that glides noiselessly across the string excites fewer harmonics.

By controlling the texture, material and contour of a thick pick (say 1.5 mm), a wide tonal range is possible.

The scientific objective side of the answer has been thoroughly explored, so I'll keep my answer on the touchy-feely subjective side 😊 We've established a thicker plectrum (yes, it's actually the right term) is proportionally more rigid and tranfers energy more efficiently. It also has more mass, and depending on your picking speed (160 bpm sextuplets, anyone?) it can have an influence. And they can get crazy massive : http://plectrum.ch . I find that the thicker the plectrums I use the lighter my touch becomes, ergo less bright zingy harmonics are produced by the strings, ergo a slightly darker, more muted tone. Cheers, keep on rockin' in a free world 🌍

Not the answer you're looking for? Browse other questions tagged guitar tone picks or ask your own question.

13
Slightly tone-deaf?
6
Why do lighter picks sound “better” on acoustic guitars?
5
How to improve right hand picking/strumming technique for electric and acoustic guitar?
1
Electric guitar problem, bad resonance?
2
Why does my amp sound better when I am not standing directly in front of it?
1
How important is it to use “proper” technique for guitar playing?
1
Fingertip-covering picks for fingerstyle guitar
6
Why are tortoise-shell picks prized?
1
Anyone else have a noise issue with thicker (~9mm) picks?
2
Flutes in octaves sounds like an organ? Why does this happen?