Are there scales and chord progressions particularly used in Rag music?

Are there scales and chord progressions particularly used in Rag music?

Structurally ragtime harmony is pretty much classical tonal harmony, but there are of course some idiomatic specificities that give ragtime its characteristic sound.

One progression very characteristic of ragtime is the so called... ragtime progression (although it was used before, even in classical music, it was mostly popularized in ragtime). It's made of a succession of "piggybacked" secondary dominants in a succession of 4th intervals onto the tonic, e.g., in C, in its full extension:

There is also a lot of chromatic substitutions, usually dictated by voice leading (i.e. chords changing by step intervals, mostly half tones) thus creating a lot of full and half diminished (7th) chords.

Just to give an example, at the end of the B part Scott Joplin's Maple Leaf Rag (Ab major), the progression is:

Notice how the first chord of the "ragtime progression", F in this case, is approached chromatically in a quite seamless way. Then the progression follows pretty much plainly (no no-chord-tones for two bars). In bar 4, at the point marked with *, Bbmin is replaced by Bb7add9 both providing harmonic interest and smoothing voice leading: notice how the uppermost and lower "treble" voices move stepwise. 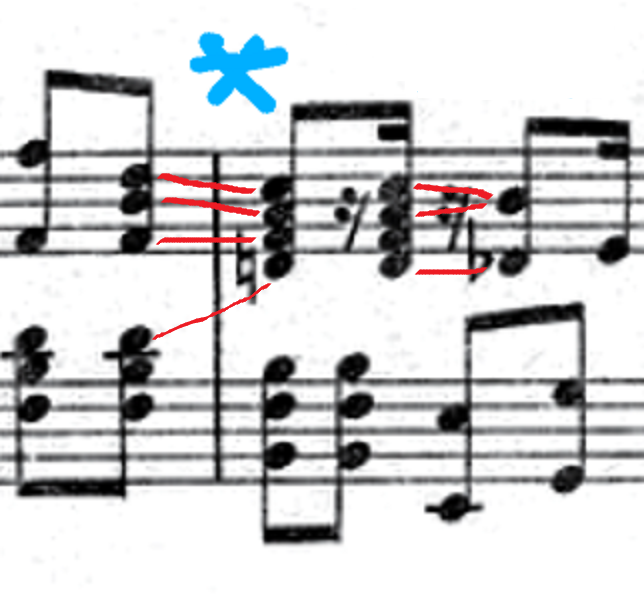 Regarding scales, my understanding is that structurally they are mostly diatonic, I don't think that pentatonic or blues scales are inherently used, although sometimes a "bluesy" sound may occur by means of the harmony. Melody is not a strong component of ragtime anyway, many ragtimes almost have no melody as such, or melody is built practically with arpeggiated chords and a lot of chromatic passing tones (Mapleleaf Rag a case in point).

Let's for simplicity we're in the key of C.

A possible "verse" (very common) is

There are lots of C6s and F6s scattered throughout, especially when you get to the "second section", and that second section (quite often) starts with G.

In quite a few of them, there is the trio section, which is going to be in a key a perfect 4th from your starting key. In this case, that trio section will be in F.

My apologies for my dilettante approach to this.

Not the answer you're looking for? Browse other questions tagged scales composition chord-progressions ragtime or ask your own question.

5
Elements of a horror musical song?
13
What chord progressions are used in traditional Celtic music?
4
Understanding music with multiple key changes within chord progressions
4
Practice chord progressions along with scales?
4
What are the avoid notes for exotic scales in jazz music?
7
Why are there only N scales and 12 notes values that can be root note
5
Can the blues scale be used over iim7 V7 Imaj7?
3
Chord-Scale Theory: Determine chord qualities