How does one learn the different scale patterns that change when you change fret?

I have just learned what a scale is and I am practicing the minor pentatonic scale on guitar. I have noticed that when you change what fret you start on, the pattern changes.

For reference, I am using this site: JGuitar

You can change what fret you would like to start on.

With root of E, I know the sequence is EGABD but I have noticed that there are 9 different patterns on this scale. If you change from fret 0 to start on fret 1, the pattern changes.

How does one go about learning this?

Is there an easier way?

Is there some vital theory/information I am missing?

Looking at the site you linked and clicking on each fret to change the pattern, there are actually only 5 (not 9) completely different distinct patterns that repeat. Several are exactly the same notes and some show a slight variation on the same basic "pattern". Allow me to expand on some of the other answers.

The CAGED system referred to in the answer by Yorik is a method for more easily understanding and visualizing the five patterns for the major scales. The CAGED system is based on the common open position chord voicings for major chords - which with a capo or barre can be moved up the neck to different keys.

The patterns for the major scales are based on these 5 chord shapes moved up the neck. As you move the root farther up the neck towards the bridge the patterns change in the order of C A G E and D.

To help you see this in your mind let's take a C major chord in first position played like this:

All the notes in this chord will be found in the C major pentatonic scale in position 1 with the nut serving as the zero fret and the pattern would look like this:

Note the orientation of the picture differs from the chord chart but the red indicates the fretted strings for a basic open C chord. The open strings are part of the pattern as well and would be played as a fretted note if you move this pattern up the neck to make it a C# or D or etc. pentatonic scale.

Now visualize putting a capo on the 3rd fret (or barre with your first finger) and playing an A Shaped chord like this one:

With the capo on the 3rd fret this would be a C chord in a different position on the neck and would constitute a different pattern that would look like this:

To visualize the next position for the next pattern in the C A G E D system we put a capo on the 5th fret and play a G like this:

But with the capo on the 5th fret it will be a C and form the outline (including the capoed notes) of the third pattern.

Move the capo up 3 more frets to the eighth fret (or use a first finger barre) and play an E chord like this.

This "E" chord shape played with capo on the eighth fret will again be a C chord and the notes fretted for this chord including the ones barred by the capo or your finger will form the basic outline of the next pattern for the C major pentatonic scale.

The final pattern is based on the D chord that looks like this.

With a capo on the tenth fret this D shaped chord will again play a C chord and form the outline of the final pattern in the CAGED system.

The minor pentatonic patterns are similarly based around an open chord formation of a minor chord.

Position four is based on the common Am shape (which same shape is used with a barre to play Bm and Cm). Position five is based on a less common (vs the Em shaped 3rd fret barre chord) open G minor formation (pictured below) that starts with a basic open G major chord and shifts the B (third of G major) by one fret to make it Bb thus making the G major a G minor.

By visualizing the 5 different major or minor chord shapes at different positions on the neck, you can easily find many of the notes in a major or minor pentatonic scale in whatever key you are playing them in. And once you learn where the non chord tone notes hit for each pattern, you will be all set.

So you only need to learn the 5 major chord shapes (C A G E and D) and the five patterns based on them and do the same with the minor chord shapes and patterns and then practice starting with the C based pattern and moving up to the A based pattern and then the G and so on all the way through D and back. Repeat the process for the minor patterns. Incorporate playing through these into your regular practice routine.

Eventually it will become second nature. But it will take intentional, deliberate, consistent and dedicated practice.

So if you look carefully at the E Major Pentatonic graph, you will notice that the scales are basically overlapping barred chord forms of E (where the nut itself is a bar for open E chord): E pattern; D pattern; C pattern; A pattern; finally G pattern; repeat.

By D pattern, I mean the D chord form barred at the second fret (E major).

This is, basically, the CAGED system.

The E minor Pentatonic graph works in the same way, except they are Em; Dm pattern etc.

Learning them is a lot of rote memorization and practice, but once you see the construction blocks, it is easier to find your way into a scale at any position on the board.

I learned the major and minor pentatonic patterns (which are identical except for which note is the root of the scale) by first learning these five patterns: 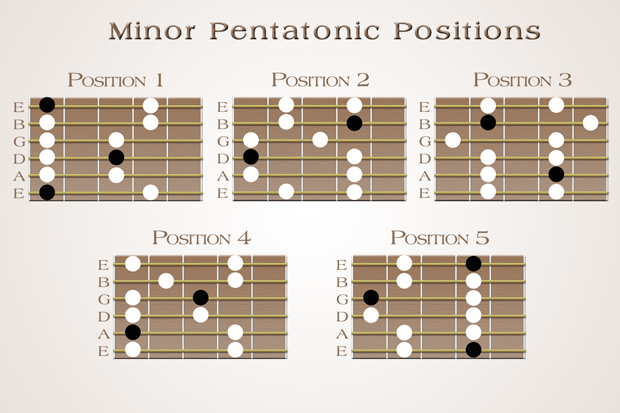 Then I learned to connect the patterns, first by playing each pattern in sequence up and down the neck and then up and down each string.

Finally I played along with blues and blues-rock moving up and down the neck. Then I played solos that moved among all the patterns.

My goal was to learn to play fluidly whatever I heard in my head. I may have sacrificed some speed, but I like my playing and others do, too.

1
On guitar, which Major scale patterns should I learn solely?
6
Is it better to memorise each scale, or just memorise the patterns?
47
Why does the scale have seven (or five) notes? Why not six?
3
Why did Segovia use a different pattern for the B minor scale?
2
When playing a scale for a solo do you play only within that octave on the fret board?
1
Why use guitar scale patterns when we can just use CAGED?
2
How are guitar scale shapes/patterns named?
6
What to do after learned scales positions?
3
How to read movable scale chart for A minor pentatonic?