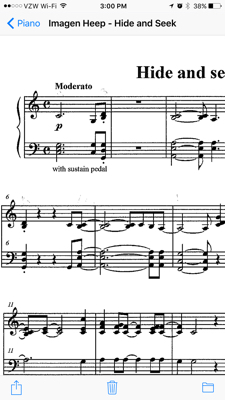 Usually this happens when the piece was originally for some other instrument, and most likely for more than one. For instance, this might have been an orchestral piece or a song for voices, where it would make sense for two different voices to play (or sing) the same note.

Of course, on the piano you cannot play the same note twice. So, you will only play it with one hand; play the one G and ignore the other.

This is apparently a rather carelessly produced version, since the composer's name is spelled wrongly! She is Imogen Heap, not Imagen Heep. So it's probably not worth trying to guess why the music is written the way it is.

But this notation does sometimes occur in keyboard versions of music that is in several melodic "voices," for example a piece that was originally written for a choir or a group of monophonic instruments. In the original, two different "voices" may sometimes "collide" and sing or play the same note, and that is reproduced in the piano arrangement.

On a piano version, you just play the "doubled" note once, with whichever hand seems easiest.

Of course if you are playing a keyboard instrument with more than one keyboard (organ, synths, etc) there is no reason why you shouldn't play the same pitch note on different keyboards at the same time, and often the two keyboards will be producing different sounds from each other.

This is actually extremely common in keyboard music with any degree of polyphony baked in. I don't think I've written a keyboard piece that doesn't have at least one unison in it.

Yes, you normally play the unison with one finger on one key, with rare exceptions in pieces specifically written for instruments with 2 or more manuals (e.g., Goldberg Variations). The unisons are there to make the voice leading clear, because understanding how the voices proceed will affect your phrasing.

I'd recommend looking over the answers and commentary to Same note to be played with both hands? - this question has come up before.

This is very common in early keyboard music, in which the two hands could play on different manuals on either a harpsichord or an organ. On a piano you just play the note once.

This is the correct notation of this song:

She’s singing/playing with a vocoder.

I agree with user 16935 that this kind of notation is quite usual. I remember several Bartok pieces training exactly this problem to play the same piano key with both hands, using both thumbs on the little G-key.

We can compare this situation with a picture of a drawing with transparent silhouettes.

0
How to play same note with left and right hand
0
How to play the attached bar (same note on both hands)
1
How to play similar notes appeared simultaneously?
13
Same note to be played with both hands?
3
What is this double-note and how do you play it?
4
overlapping note on same staff

11
How to know whether a note is to be played with the left hand or the right hand?
5
Piano accompaniment with left or right hand
1
Reading piano music sheet for left hand play
2
How to synchronize left hand and right hand
11
Should we play the A right hand during full measure, or should we stop playing it in the rest of the measure once the left hand is playing it?