Getting good tone on piano with guitar calloused fingertips

I am playing the piano and I have started to learn guitar.

I had asked a similar question asked from the guitar perspective on this site.

Do calloused fingertips (due to playing guitar fretboard fingers get calloused) negatively affect the piano playing? That can be sensitivity of fingers to the touch, tone quality, piano-forte, crescendo diminuendo quality etc.

Does this concern has any foundation? I wonder should I be concerned about this at all.

Alfred Brendel was notorious for having his fingers bandaged when playing. I've read several contradictory justifications for this, but the most credible, attributed to a personal interview, is that his fingernails broke easily and he had to protect them like this: 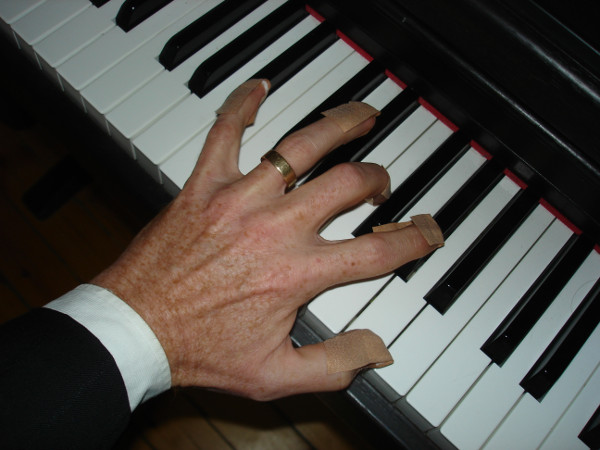 (I found this picture on the web, it is not attributed and I have no assurance that it is a photo of Brendel's own hand, it may not be, but the way the bandages are applied is consistent with the memory I have of Brendel's televised recitals that I recall).

Whatever the reason, these bandages did not stop Brendel from being one of the greatest interpreter of Beethoven and Shubert.

I enter this as a supporting example to Tim's answer (it should be a comment, but I wanted to include the picture).

Can't believe all this about calloused fingertips caused by playing guitar. It's not necessary. But in any case, I play both, don't have callouses ( I play bass guitar as well), but do not believe that callouses will affect piano touch. It's how you address the keys rather than the feel of the fingers on ivory/ebony. Do not be concerned at all.

Calluses do have an effect, but nothing that can't be overcome. In fact, most professional pianists have calluses, and many string players with heavy calluses also play piano without issues. Some even say that the firmer contact points help control the gradations of pressure in key strokes. The main negative effect is that the callused fingertips are slippery, especially on the modern plastic keys, and you can't grip the keys the way you can with softer fingertips.

One point is that "touch" on a piano is mostly a matter of "weight" or "velocity" in striking the keys. Callouses screen the surface nerves but the feeling of "weight" (to me, when playing) seems to depend more on muscle feedback than fingertip sensitivity. One doesn't want to bleed though (as mentioned in other answers) as that makes a keyboard slippery and in need of cleaning.

28
What are the ergonomic / playing differences between the guitar and the piano?
3
Is my digital piano suitable for learning to play?
8
Finger tips getting hard, calloused
4
What should a good acoustic piano feel like?
1
Piano: How high should I lift my fingers before hit keys
15
How do pianists reach extremely loud dynamics?
4
Guitar to Piano: Getting Started
1
Piano - Temporary hand soreness in right hand during fast section of "Champion Cynthia" arrangement
2
wind instrument tone - good practice routine?