What does the tempo marking "Andando" mean?

I'm reading through Nelson Riddle's book on arranging. As you'd expect, the musical examples use common Italian tempo markings, such as Andante, Andantino, Allegro and so on. However, the marking Andando is also used a lot. I've googled the word a few times but can't find exactly what it means. My guess is that it is the equivalent of Andante in maybe Portuguese or Spanish, but it would be great if somebody could provide a definitive link to the meaning of this marking.

At first I thought you were misreading the quirky script used for "Andantino". But I see that "Andantemente", "Andare" and "Andando" also appear. They all have meaning in Italian (see Google), though not generally used in musical Italian. Just Riddle (or his copyist) being a bit creative, I think! 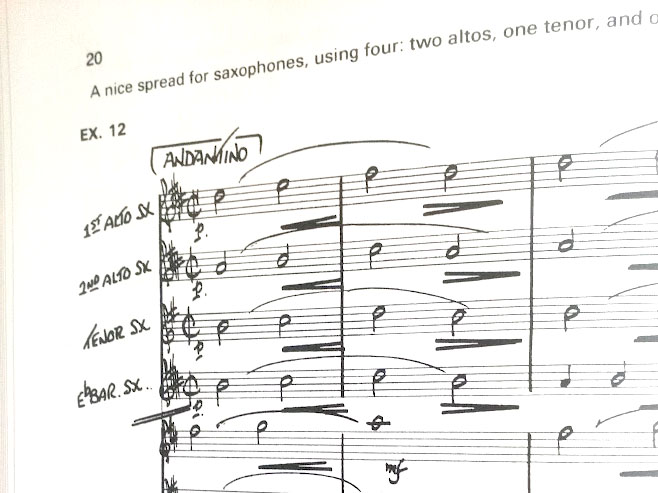 "Andando" does mean "walking" both in Portuguese and Spanish, and is used to describe the Andante tempo marking in common words, but as far as I know and have ever seen, the word is not used as a substitute for the traditionally instituted Italian words.

Incidentally, there is a link between Riddler and the Portuguese culture, as his major 1956 hit Lisbon Antigua is a cover of a Portuguese song, but as far I could research there were no direct contacts between Riddler and Portuguese musicians, and even if there was they would not have used the word with that meaning anyway. So this fact is hardly correlated with the question at stake.

Other than the above, there seems to be no biographical data relating Riddler with Portuguese, Spanish or South American music or musicians, so the Italian explanation proposed by Laurence Payne seems the more plausible.

Not the answer you're looking for? Browse other questions tagged notation terminology tempo or ask your own question.