Three notes on the violin?

Okay, I've been taking the rather unusual step of playing some violin scores on the mandolin (the tunings are the same, and they're about the same size, so they're usually pretty suitable parts).

However, I found this score for the can-can online, which is tagged 'easy violin'.

The last note of the score, however, has the violin part playing three notes simultaneously. 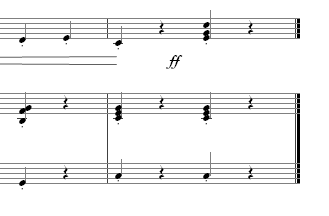 So what's going on here? I know you can't bow three notes at the same time. It could probably be picked, although it would involve at least a double stop, and I can't see any pizzicato markings. (It takes the pizz).

So what's going on here? Are staccato notes implicitly pizzicato? Are there bowing techniques that would be notated this way? Is this a mistake while transcribing the score?

It's very common to write 3 or 4 note chords for strings, and the implication is to play it as two gestures in quick succession. Here is the first page of the first movement of Beethoven's first symphony: 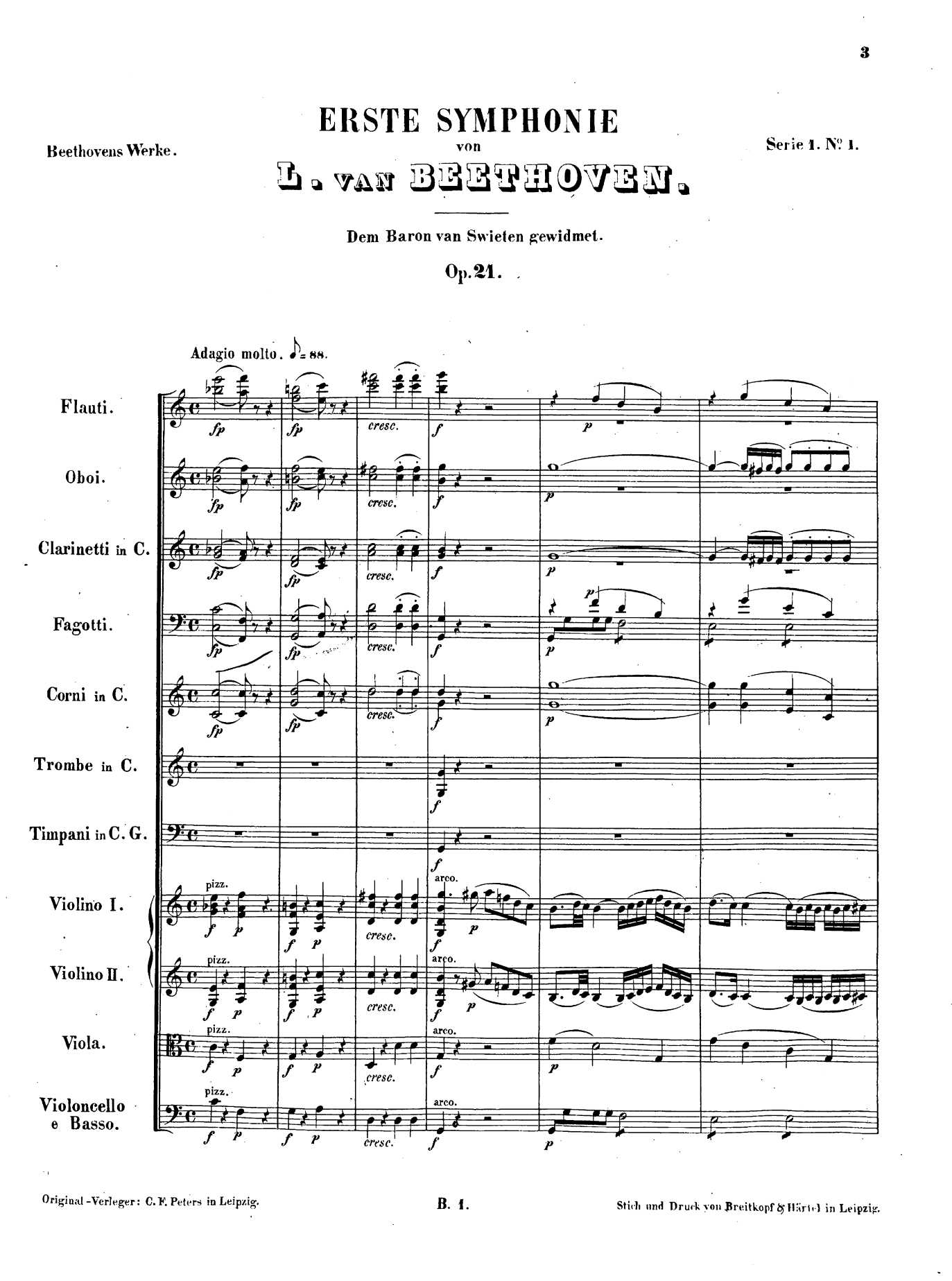 On the fourth bar, there's a 4-note chord (mercifully, with two open strings). The standard way to play this is to quickly play a double stop on the lower two notes, then sustain the upper two.

In your example, you would either play an E and then a G-C double stop, or an E-G double stop then a C. The fact that it's short leaves the options open.

As a related technique, it's common to write piano music with impossibly large chords, and it's similarly implied to break things up like this.

You're right, you can't play three notes at once on the violin with a normal bow and pressure. What's almost certainly meant here is an arpeggio, playing the three notes quickly one after the other. This is often notated sloppily as a chord which is not really possible to play- even Bach did this in his violin sonatas, leaving generations of violinists arguing about how exactly to perform them.

Depends on the era. Baroque violins had a less curved bridge and less string tension. This made it easier to play three notes simultaneously without sounding out of line.

The given chord is sort-of unusual but can be fingered in second position as 4-2-1 on G-D-A strings. Now here is where it gets strange: this is labeled "easy can-can" and a chord in second position would not usually count as "easy". It's not much of a contortion, but getting chord pitches right in double and triple stops (or more) requires a lot of practice since you cannot autocorrect in the same manner as with single notes, and second position is uncommon.

So on the whole, this looks fishy at surface value. C-E-C fingered in first position as 3-1-2 would seem quite more plausible. Or C-G-C as 3-3-2 (violins with their curved fingerboard are somewhat more amenable to partial barrées than guitars are), but that's missing the major.

While one does arpeggiate chords on the violin, that's something you do with the bow and without refingering in between and without playing two notes on the same string in succession.

So if this is intended for playing on a single instrument, it would point to having to be played in second position (which seems somewhat out of line with the "easy" tag), or being transcribed wrong.

These are called triple stops. There are also double stops and, I think they're called, quadruple stops. Double stops can be easily played by keeping your bow level between the two strings so that it touches both.

Harder to play are triple and quad stops. These are usually played with a rolled bow quickly. Usually for these, you try to keep them bow touching at least two strings at a time so that it sounds more like a chord. Of course, it's impossible to play all four strings, or even more than two strings, at a time.

Also, make sure, (if you ever decide to actually play violin with a violin ;-D) to not apply much pressure. Some people think, "Twice as many strings? Twice as much pressure!" This can cause problems, as can all excess pressure on a violin.

Don't try to roll them out - if the composer wanted you to do that, he would, most likely, write out a three note slur, or whatever. Happy violining! Or, uh, whatever it is you're doing...

It is not easily seen in this video, she uses an up bow playing the 4 notes as two double-stops in succession. Hahn - Mozart - Violin Concerto No.3 starting at about 1:18. The first one is a G the second chord is an A I believe. Here is another one on youtube What Is a Chord? | Violin Lessons . So I would play the bottom two as a double-stop and then transition to playing the top two as a double stop if you are bowing. Do some more searching on youtube, a lot of good stuff out there.

Position? Might be easiest in 2nd position, playing the E on the G with 4th finger, G on the D with 2nd finger and C on the A with 1st finger.

The above comments about it being a triple stop are correct. The way to play it is to play the E and G simultaneously bowing the G and D strings, then pivoting the bow to play the G and C playing the D and A strings simultaneously. This is done in one bow stroke.

To practice the phrase you can start by first omitting the final triple stop. Just play the E - E - C(2nd pos) - E(2nd pos). Take it slow and concentrate on getting the final E and C in tune. Then you can add the second note in the triple stop and play E - E - C - E+G. Again take it as slow as you need and concentrate on getting all the notes in tune.

Once you feel confident, add the final note of the triple stop. You will find with this technique of practicing that you can master what initially seem like complex chords by breaking them down into manageable pieces and slowly putting them back together.

In this case, you would play the first two bottom notes (E and G), then shift your bow to play the top two notes (G and D), since it is very difficult to play on three strings at once.

Reading through the replies so far I feel it hasn't been made clear enough that it is indeed perfectly possible to play three or even all four strings on a modern violin at the very same time. Not talking about an arpeggio here.

This works because if you put down the bow on,say, the d-string, apply enough weight and are not too close to the fingerboard, it gets the string low enough that the a and g strings sound as well. If you release the built-up tension very fast, you get a clean chord of three or even four notes simultaneously. Again, this is not an arpeggio, all three strings sound not in very quick succession but at exactly the same time. The same is possible for all four, though not often used. Even though needs to fine-tune the contact point, bowing spreed and pressure fairly precisely to achieve that. (When it comes to holding out triple chords longer, that's where it gets devilishly difficult. It is theoretically possible, but except from nasty exercises to torture poor violin students, I cannot off the hat think of any literature where it's actually required.)

There is a section in Arthur Grumiaux' recording of the g-minor fugue by Bach that illustrates this technique of quadruple-stopping quite astonishingly. (Even though Bach most likely would have simply played an arpeggio.) Examples where triple-stopping was probably intended by the composers would be near the finish of the exposition of the Bruch violin concerto (g-minor, No 1), or some parts of the first movement of the Brahms D-major one.

But, again, just read through the comments and felt it sounded like some kind of arpeggio would be the only way to play this, which is not the case - if that was already abundantly clear I apologize for a well-meant, but entirely useless reply.