I've been allowing another guitar player to play my Taylor 210e for church service. Problem is, the player is strumming on the top frets on the fingerboard and has started chipping away on the spruce top (below the fingerboard). Is this just poor playing technique, or is the guitar too big? Would getting a smaller Taylor GS mini or Taylor Big Baby help the situation? Or should I just invest in a giant size pick guard? Or make the player go back to his/her own guitar? Thanks for any advice.

Picking near the octave (specifically, an octave above the fretted notes) can produce a neat effect since it emphasizes the second harmonic. However, I find it's better for individual notes or slower glides across the strings than for rhythm strumming.

In either case, however, striking the guitar top is poor technique. Even extreme angles of attack shouldn't result in this — you don't want the pick to catch on anything but the strings at the beginning of the stroke, and in the worst case you should plant your hand ahead of the pick at the end of the stroke. If done abruptly, the latter can provide a thumping rhythm if so desired. A higher pitched tapping with the pick can be done very softly — it shouldn't result in chipping. If no extra tapping is intended then it's just further evidence of very poor technique. Pick guards are for accidents and beginners, not for persistent disregard of the instrument (unless it's your own and you're making some sort of performance statement!).

Without more detail on the player I can't properly comment as to whether the size of the guitar is factoring into this issue, but I would certainly recommend that you have them go back to their own guitar.

In my observations of many guitar players at the many Open Mic events I have attended over the past ten years, I have found that some guitarist tend to strum closer to the fret-board than the bridge.

I have also observed that where a guitarist strumming lands on the strings will often vary depending on whether he/she is playing standing with a strap or seated with the guitar supported on a knee.

Of course this might be affected to some degree by the size of the guitar, but I know that I tend to land in the same place with my GS Mini as with my Taylor 614 CE which is much larger. So I think a great deal of where a particular guitarist tends to hit the strings while strumming is developed through habit - which may take a concentrated and intentional effort over a long period of time to change.

Suggesting to your fellow musician that they must alter their technique may lead to them becoming so focused on their strumming technique and worried about your ire if they continue to damage your guitar, that they lose focus on the music and the music may suffer.

One possible solution might be to purchase a Taylor Universal Reusable Removable pick guard like the one pictured below, but cut it with a razor knife and straight edge, so that it could be fitted underneath the fret-board. 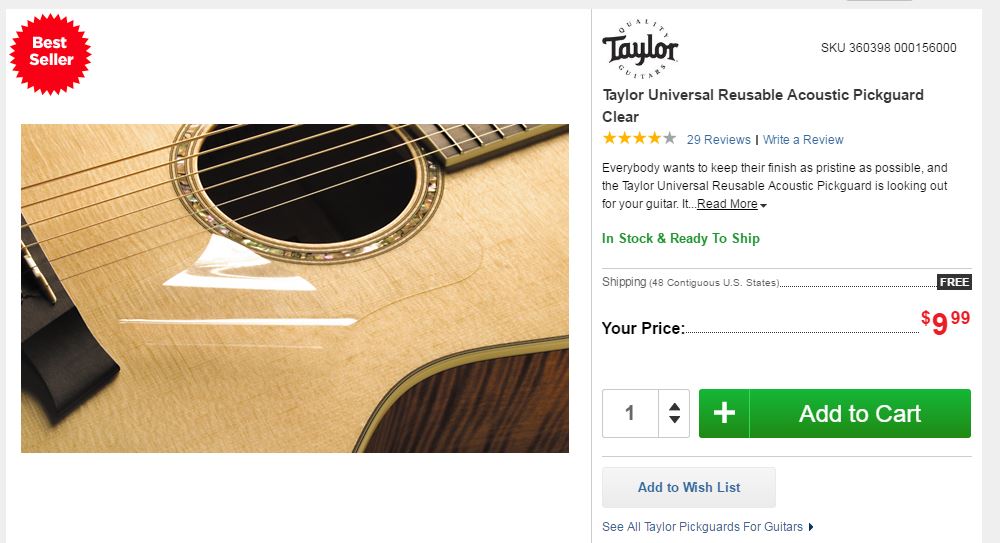 Another alternative solution that might look tacky (no pun intended) is Blue Removable Painter's Tape in a 2 or 3 inch width. You should use several layers to prevent pick damage. I recommend that you remove it immediately after the performance and use a suitable guitar polish to remove any residue of adhesive (although the removable painters tape will not leave much if you don't leave it on long). Just for the record, I tried this right after typing this and I detected no residual residue after pulling the tape off. I tape my fret board with painters tape when I dress my frets but I do oil the fretboard after removing the tape.

But anything you do in an attempt to protect your guitar will have the potential to distract the guitarist in question from concentrating fully on the music.

I think your best bet will be to either have them go back to their own guitar or offer to sell your Taylor to them at a price that reflects the value before they damaged the guitar (or whatever is mutually agreeable and fair). The latter is not an option if your guitar has sentimental value (which would be more reason to opt for the former).