What does a mordent written to the left of a note mean?

In this arrangement of Wachet Auf, there are quite a few mordents sprinkled around, as well as trills and grace notes. I understand most of them, but in the middle of this excerpt,

right before the bar line, there is a mordent that appears to the left of the F, instead of over it. Does it mean the same as a mordent over a note?

And what about the slur? That seems to suggest that the mordent is actually played below the F. Here is a magnified view of the mordent and slur in question: 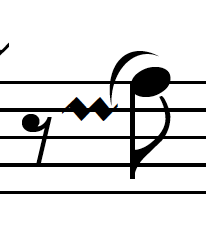 Update and state of the question:

It's been argued convincingly by guidot and alephzero that the "slur" is not a slur, but is actually an attempt to graphically reproduce (with modern, more automated tools) the notation shown in this older, hand-engraved manuscript:

But the question remains, what does this notation mean? Including, how should it be realized? I don't think it's a doppel cadence (reversed or otherwise) from Bach's guide to ornaments, since it appears to the left of, and below, the principal note.

Meyer and Patrx say that it's a slide (two grace notes leading up to the principal), which makes a lot of sense in the context. I haven't yet seen a source (like Lovelock) where a slide is documented as being written with a tail, but the realization is confirmed by recordings like this one (0:24) and others.

When the Mordent sign is used in front of the note it actually indicates a slide. If you can excuse the poor photo of the source material I think it can still be of some worth to you.

It says the following...

THE SLIDE. This is written as a Mordent sign before a note and consists of the two notes below the principal note taken consecutively, and leading up to the principal. Note-values, speeds, grouping etc. as for the Mordent.

Since I can't attach an image to a comment:

@guidot said in a comment he was "unconvinced" by non-professional engraving here. I agree that in the OP's image the ornament seems to have been "faked" (and rather crudely), but the same ornament appears in the (old, hand-engraved) Bach-Gesellschaft Ausgabe, Band 25: http://ks.imslp.info/files/imglnks/usimg/6/69/IMSLP04105-Bach_-BGA-_BWV_645-650.pdf 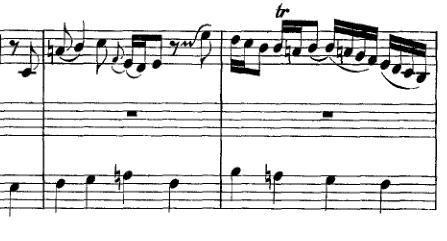 Bachs autograph here in wikipedia shows something similar: the round tail (first line, last two bars) appears on the left side and indicates a three-note-group followed by the zig-zag line symbolizing the alteration between two notes, and the direction of the tail indicates, whether the notes descend or ascend.

I would conclude, that in your example the three-note group should be played at the end in ascending variant.

Kochevitsky (p. 28, requires registration) confirms the slide notation with a "tail," like the one in the sheet music I was originally asking about:

However in Kochevitsky's text there is no clear example of a the mordent-with-tail slide notation without a preceding note for it to lead from.

Looking thru the Dolmetsch online, I found a couple interesting suggestions. First, the Bach-specific set of ornaments, and then the

symbol called custos (Latin), Wachte (German), guida (Italian), guidon (French) or 'direct', placed at the end of a line to indicate the pitch of the first note on the next line

(from the front page ) . However, as the notation in question is not at the end of a line, I'd say it's a Bach ornament as the other answers state.