For example, consider this song :

Technically speaking, you can't ever say for certain until you see the composer's original score (if there even is one); a piece could literally be written in an infinite number of time signatures. As such, we have to make these decisions based on a knowledge of prior practice and on what makes the most practical sense. So, let's look at this excerpt notated in the two manners you suggested:

Example 1: Notated in 4/4 with triplets

Well, that seems a bit hectic, doesn't it? Let's try this instead:

Hopefully you agree that Example 2 is a bit more user-friendly than Example 1! Indeed, this alone should be enough to suggest that this was probably conceived in a fast 3/4, and this is not uncommon; though the individual beats themselves are quick, music like this is often felt "in one" instead of in three. So we don't feel it as a lightning-fast onetwothreeandonetwothreeand but rather as a more leisurely ONEtwothreeandONEtwothreeand. Thus I would bet that it was originally considered in a triple meter (as in, 3 on top in the time signature) instead of triplets in a duple or quadruple meter.

Edit: And here's another example to show what Tim discusses in his answer.

I'd put it in 6/8, due to the triplets feel, but the phrasing kind of repeats every two bars, thus two lots of 3/8, making 6/8. Why /8? Well, it's fairly quick, so I'd write it as quavers instead of crotchets. There is a recent question on that subject - quavers to play give the feeling that they are quicker - I know it depends on the tempo mark, but nevertheless...

In contrast to what Richard has written, I do not believe that this is in 3/4 time, and choosing a meter by which is visually easier (whatever that means) is misunderstanding what a meter really is. Meter is ultimately about what we can hear, and choosing a meter based on visual simplicity gives short shrift to our own ears.

In William Caplin's book Classical Form, he discussed real meter vs notated meter. The notated meter can not be determined by listening, whereas the real meter can only be perceived through hearing. As has been pointed out, this theme could be notated in many meters: 3/4, 3/8, 6/8, or 12/8. Heck, you could even notate it in 1/4 time, and the first doop doop doo-doo would take three measures. No matter how Ramin Djawadi chose to notate it, ultimately, what he wrote down is merely the notated meter, and unless one of us gets a chance to see his score, we will simply be guessing as to what that might be.

First, a measure should be long enough to carry a meaningful musical unit. This usually means that it carries more than a single impulse. This is the reason that I would reject 1/4, and suspect that 3/4 and 3/8 are both improbable as the real meter.

This brings me to the conclusion that the most likely real meter is 6/8, which has 8 bar phrases, and measures that carry more musical material than a single impulse.

Now, as for the notated meter, that is a research question, and anyone's guess unless the composer or one of the players lets us know.

By total random chance, I have just seen a signed copy of the first page of Ramin Djawadi's score (!), and I can now confirm that the he notated it in 6/8: 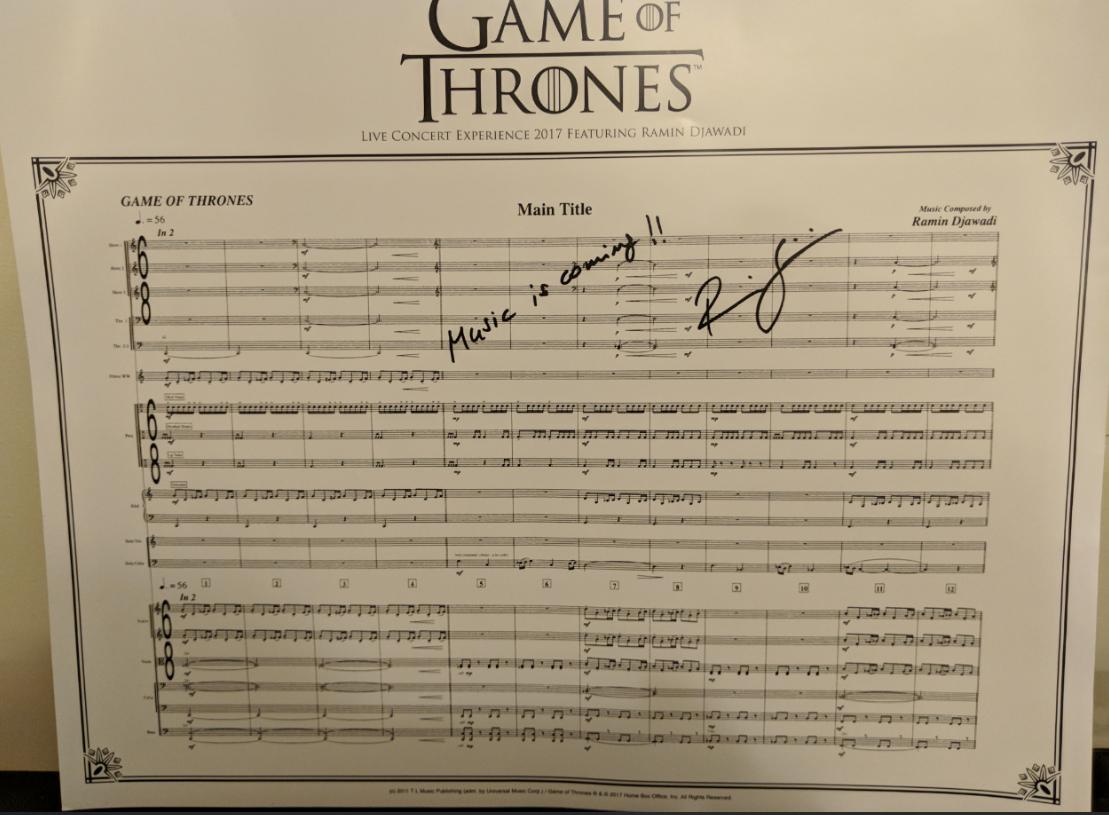 For example, Liszt's famous Mephisto Waltz #1 (piano score and recordings easy to find on youtube) is notated as about 900 bars of 3/4, but counting 1-2-3 1-2-3 that fast is too exhausting. It's much easier to hear a "downbeat" on every fourth bar, or even every eighth bar.

Not the answer you're looking for? Browse other questions tagged theory rhythm time-signatures beats meter or ask your own question.

5
What does this line/square bracket under the notes mean in piano?

19
What is the connection between time-signature, beat, and tempo?
6
I have a song in my head, I know how it sounds, but I can't get it to translate well to DAW
5
What is the time signature and tempo (let's say for the intro) of Yes' Close to The Edge song?
1
How does one choose the correct time signature to match the tempo and vice versa?
4
How to determine fast if song has constant tempo
11
What time signature has 3 out of 8 beats accented?
2
how do you find time signatures which does not match 3 , 4 ,5 , 7 counts,etc ? Or Can some songs have no time signatures ?
2
Is splitting the quarters into triplets syncopation?
5
Is it appropriate to use BPM to measure the tempo of a song?