How is the tempo and time signatures related?

I've been playing piano for 7 months now. I've decided to formally start music theory. I know the notes, rests and their values. Now, let me start off with 2 bars. The first being a 4/4 and the next one being 4/8.

Also the common time, has 4 beats and with each beat being a quarter/ crotchet. At this point I don't think we have given any absolute tempo to this bar just a relative tempo between the notes, right? What I mean by that is that, I can always play this bar faster by adding a notation like pianissimo or a fortissimo above the bar.

Now, let's consider the second bar. In general, I've seen 4/8 bars being played faster. I understand that there are 4 beats and each beat is an eighth note. But this can always be played EXACTLY as the 4/4 with just change in the tempo in my bar denoted by a semi-crotchet = 80 right? Am I wrong to say this?

In summary, is it right to say that

I know it is simple math but just wanted to get my fundamentals all set :)

What I mean by that is that, I can always play this bar faster by adding a notation like pianissimo or a fortissimo above the bar.

Almost. Pianissimo and fortissimo are dynamics. They relate to the loudness (also called "intensity") of the music. But there are other words to use for speed. You could simply write "faster" or "slower." There are all kinds of ways to write this, and in a few different languages.

There isn't a standard tempo per se, but I'd say if you took a sample of the population and just said "pick a normal tempo," it'd be somewhere between 86 and 120 bpm. (This is a rough guess; Justin London's book "Hearing in Time" has some more specific research on things like this.)

But this can always be played EXACTLY as the 4/4 with just change in the tempo in my bar denoted by a semi-crotchet = 80 right?

Exactly right. You could also write quarter note = 40 for the 4/8 bar, which is the same thing. Since there are two eighths in a quarter, the quarter note tempo will have half as slow (40) as the eighth note tempo (80).

Hmm. The issue is that there are a lot of historical issues that come into play with this. If a composer uses a 4/8 time signature, it was probably for a specific reason. An informed, learned musician would have a fair amount of background experience that would go into the tempo decision, whether or not the tempo is actually written in the score.

But your final summary is correct! It only leads to one question: in a real score, would you want to switch tempos and time signatures, or just stay in 4/4 for both bars?

It's exciting to see your enthusiasm just starting out; keep it up!

Your conclusion is faulty. It is a widely held misconception in music. There is no inherent tempo in a time signature. All a time signature aims to tell you is what bars consist of and what the grouping of notes should look like.

You find Organ pieces that have a bunch semiquavers and quavers but the tempo is still very slow because you play at 60bpm.

There is also pieces written in 4/2 time which basically only consists of minims and semibreves that can still be played fast.

The time signature really has nothing to do with tempo.

In summary, is it right to say that

If the bottom number changes, as in your example of 4/4 and 4/8, sometimes it is not obvious even to experienced musicians what the composer meant. Modern music often uses a notation called a "metric modulation" (a strange name, IMO) to show exactly what is intended. In the top example, 8th-notes in the second bar should be played at the same speed as quarter-notes in the first bar. In the bottom example, quarter notes are played at the same speed in both bars, so the 8th notes in the second bar will be twice as fast as the quarter notes in the first bar. 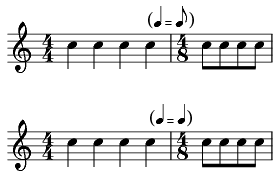 If one of the time signature is simple and the other is compound, for example 4/4 and 6/8, that usually means that a quarter note of 4/4 is the same tempo as a dotted quarter note in 6/8, because 6/8 time has two beats to the bar, not six.

But the most basic "rule" in reading all music notation is "use your common sense, and if the way you are interpreting the notation doesn't seem to make sense musically, the notation probably means something different from what you think it means". Of course you have to develop your "musical common sense" as you learn! A good way to do that is listen to as much music as you can, and think about what you are hearing.

In music generally, the time signature tells us nothing about the tempo. There have, at different historical times, in some types of music, been some conventions about what note values to use for different speeds. And sometimes the 'shorter' note wasn't used for the faster music! But, overall, there's no tempo information in a time signature.

But since computer sequencing has taken over some styles of music, there is a de facto standard of q=120. Because that's the tempo that most sequencers default to when you open a new project. And a WHOLE LOT of today's music seems to be at q=120 :-)