tips for switching from g chord to c chord on guitar

I've been playing guitar for about a month following Justin guitar's beginners course and I could do some basic chord changes quite fine but I find myself really struggling when I'm trying to change from a G chord to a C chord.

I've been trying to get it smoothly for about a week now trying different things but I still cant get it right. Any tips?

The answers given so far offer excellent and accurate advice on learning chord changes in general! But I will offer a tip that will help many beginning (and some experienced) guitarist with the specific change from G to C which is what your question is about. 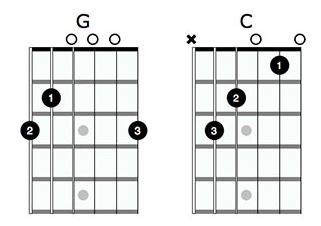 This complete reversal requires a great deal of movement (fingers travel a great distance between chords) and although it is a very common transition, it may be one of the more difficult transitions to master effectively at any modicum of speed.

For that reason, I teach my beginning guitar students to play the G chord using their pinkie on the 3rd fret g of the high e string instead of their ring finger. Your middle (2) and ring (3) finger are used to fret the two bass strings as shown in the diagram below. 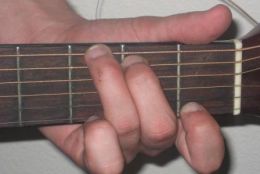 Note that from the position shown in this picture, you can very easily transition from G to G7 or vice versa by alternating between your first finger on the first fret of the high e and your pinkie on the 3rd fret using an almost imperceptible amount of movement. Also notice that the first, second and third fingers are aligned the same way as they will be when playing a standard C chord and going from G to C will require only a slight shift from this position.

It is a little more difficult to play any chord using your pinkie in the beginning because the pinkie is a finger that we rarely use in every day life so it is weaker and less coordinated. But the sooner you learn to start using your pinkie in chords, the faster you will progress as a guitar student.

One other "cheat" I often teach beginners to help get them playing two and three chord songs quickly so they are more encouraged to continue guitar lessons - is using the Cadd9 chord (as a substitute for C major) to G chord transition using a third way to play the G h. This cheat only requires a very slight movement of two fingers to change from C (Cadd9 substitute) to G.

From this G you can easily transition to the Cadd9 (pictured above) simply by moving your first (index) and second (middle) fingers down slightly from the E and A string to the A and D string. Don't remove your 3rd (ring) and 4th (pinkie) fingers from the strings - just leave them right where they are.

The G to C / C to G transition described above (using a Cadd9 as a substitute for C major) might be one of the easiest transitions a beginning guitarist can learn and can get them playing two chord songs in the key of G or C right out of the gate.

It all takes practice but hopefully some of these tips will help you with the G to C transition. Enjoy the journey!

A few thoughts for you. Learning to play chords on guitar doesn't really fit the mechanics that most people are used to with their hands. Having difficulty with some chords (or chord voicings) after one month is not surprising or uncommon.

You could try arpeggiating the chords (playing out each note of the chord individually). This would allow you to practice placing each finger individually. You would want to make sure that you end up with all of the appropriate fingers held down at the same time so that you're not just practicing individual notes. I would recommend doing this from the bottom up and the top down. You could even do it from the middle outward, it's just a little less intuitive. Ideally this will help your hands get used to the shapes and be more easily able to build them on demand; it's not intended to make the switching faster so much as the ability to form the chord faster, which will make it easier to switch quickly.

You can also try to slow things down a bit, which will give you a little more time to get your fingers in place. In general, teachers always suggest moving the tempo around to get a better understanding of things and ingrain each aspect a little better by having a different context. This is most typically applied to playing certain rhythms or fast melodic lines but could certainly be used in this setting as well. They always say that if you can't play it slow, you can't really play it.

You can also work on adding a space between the two chords. Similar to slowing things down, this gives you some room to move around. It would be best to do this with a consistent tempo, so if you have a metronome, I would suggest using it (in general but specifically for this exercise). I would recommend playing a chord for one beat, then resting for the next beat, then the next chord, followed by another rest. I would start slower (maybe around 60 bpm), to give yourself more time, then increase the tempo incrementally. The idea here is that you have an allotted amount of time to get to the next chord, so you want to choose tempos that line up with your ability to switch. If it's difficult for you to follow the beat that slow (which is common), you can try setting the tempo to twice that (120 bpm to start) and play each chord for two beats, then rest for two beats.

Since the mechanics of forming chords aren't intuitive, you should expect it to take a little time. Make sure to practice regularly to get the fastest results and remember that practicing for long periods of time is not always better. Practice smarter, not harder, as they say. Basically practicing for too long will wear you out, especially as a beginner, and make things stick less well. Practicing for 20 min a couple times a day will likely yield better results than practicing for 40 min once a day.

Repeat this method with the G chord.

I don't think one should really get stuck into learning one specific way to switch from one chord to another. I'm self taught and playing for a year now, so my methods may not be the best, but here are my take on this:

One thing that I have learned is to not get stuck on one shape to play a chord or a specific way to change between chords. This can cramp your style and again make other chord changes a challange. There are some considerations that you need take into account when changing between chords, like what is the preceding chord, next chord and what type of embellishment do you want to apply to the current chord being played, and most importantly, what is more comfortable for you and what works for you with the least amount of effort. I think most entry level chord books comes with one basic fingering for a chord which beginners think is the alpha and omega. One need to remember, there is no wrong way to finger a chord, and that is also not the only way to play a chord.

Lets look at the G chord. I play my G, by default, the four finger way with my ring and pinky on the third frets of the B and high E strings. I also alternatively play it the three finger way with my pinky on third fret high E. This always leaves my index finger in a position for emballishing the G chord. Which G shape I'm using is almost always dependant on the preceding chord. When coming from something like a D chord, I use the 4 finger G (works great when moving from G to Cadd9), and when coming from an open F chord or a C chord, I use the three finger G (this finger pattern also works great when moving from G to G7). When coming from E, Em, A or Am, I tend to alternate depending on the next chord, so if C is the next chord after G, I will use the three finger G then. (As an extra, if I come from a full F barre chord, I tend to slight up a whole step to a full barre G chord)

So, when I move from G to C, I could be coming from a full G barre chord, 3 finger G or a 4 finger G depending on the chord that came before that. So, for me, there is no predefined way of moving from a G to a C.

What is important is your wrist position when forming the C chord, whether or not you are coming from a G or not. I remember seeing a tutorial by Marty Swartz (I think it was for Linger by the Cranberries). In that video, he gave a tip that, when forming a C chord, one should use your ring finger as an anchor. As beginner, this should be your leading finger, the first finger that you should get down. With your ring finger down, your wrist is stabilized and cannot swivel around, this also positions your wrist perfectly. It is then just basically a matter of fretting your 2 remaining fingers. I think that when you can really master a C chord this way, it would be much easier to switch to a C from any other chord.

To conclude, the only real way to learn is to practice. I really put a lot of time into practicing. Get yourself a few easy beginner songs with easy chord changes. Being a Nirvana fan, I chose a lot of their songs, most of then is really easy to play, specially on acoustic. For me, this is still a fun way to learn new tricks, and what is really nice is, at the end of the day, while learning something like chord changes, you also learn to play some of your favorite songs, which in turn can be great fun around the braai or campfire.

Good luck and have fun, and never ever give up if you do not immediately succeed. Your favorite guitarplayer was also a beginner, just like you, which had the same issues as you. What made him where he is today, was (and still is) lots of practice and never giving up

Not the answer you're looking for? Browse other questions tagged guitar technique practice or ask your own question.

13
Organ technique for pianists
2
Finger Issues Learning Guitar
3
How do I find guitar chords to play while I sing “Frozen Heart” from disney's Frozen?
3
When to practice a song or chord progression in different keys
7
How to train for faster picking speed on guitar?
4
Learning piano after nine years of playing guitar
12
Ear training for 12 bar blues chord changes
5
Is Soreness in Middle Knuckle of Fretting Hand Index Finger Normal for Beginners?
1
How can I improve my technique on acoustic guitar while teaching the basics everyday?
2
playing guitar and singing